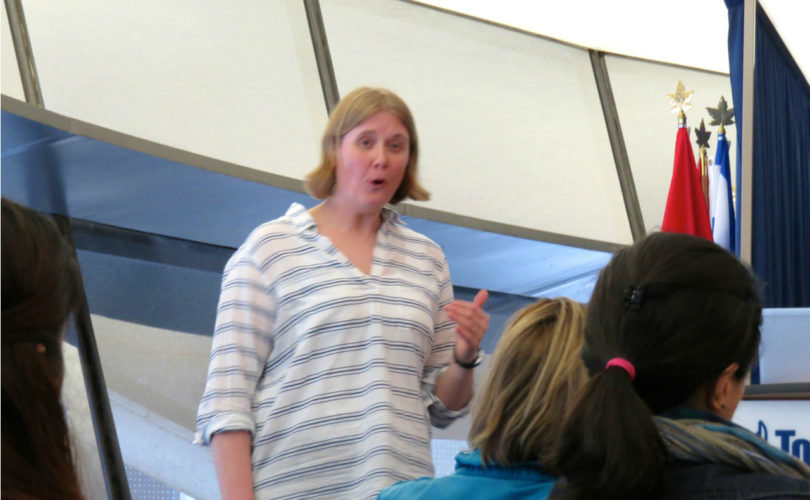 MISSISSAUGA, Ontario, September 3, 2015 (LifeSiteNews) — Despite an explicit government promise ensuring that parents can opt their kids out of the controversial sex-ed program beginning in schools next week, the province’s second largest school board has declared that parents will not be able to opt their kids out of portions of the course dealing with homosexuality and gender identity.

In a letter submitted to all mainstream media outlets yesterday, Peel Director of Education Tony Pontes was unambiguous that a request from parents to have their children opt-out would not be accommodated.

“Where the work in the classroom is about inclusion—whatever form that inclusion may take—any of the protected grounds in the Human Rights Code—we will not provide religious or any other accommodation,” he stated.

Jack Fonseca of Campaign Life Coalition called the move a “shocking attempt by the state to annex parental authority.”

“Contrary to what this director says, there is no such thing as a human right to force your personal beliefs about sexual morality onto other people's children,” he told LifeSiteNews.

Pontes justified the board’s position by insisting that it is trying to end what he called “discrimination.”

“We cannot—we will not—by action or inaction endorse discrimination. What does this mean? Well, if we are talking about different kinds of families—a discussion that builds a climate of inclusion and safety—we will not allow religious accommodation to be used as a reason for a student to miss that lesson,” he stated in the letter.

But Fonseca said the statement amounted to Pontes “trying to bulldoze the public into believing” that teachers and education bureaucrats can take away a “parental rights as primary educators of children” in the name of “anti-discrimination.”

“But in doing so,” Fonseca continued, “the Board is discriminating aggressively against all parents including Christians, Muslims, Sikhs, Jews, and traditionally-principled families in general.”

“When you look at the situation objectively, Pontes is really talking about the State acting as a foreign occupier, coming into the most intimate part of your family life – the religious and moral values you pass onto your children – and declaring that it has the power to override those values for 8 hours per day, 5 days a week.  Deciding what moral beliefs children are raised with regarding human sexuality is the sole prerogative of parents,” he said.

Last April two lesbian teachers from the Peel board gave an indication of how the board handles these issues when they spoke at a pro-gay educators conference in Toronto. The teachers explained in detail how they use the classroom to convince children as young as four to accept homosexual relationships. One teacher used pro-gay books such as “King and King” as a springboard for what she called “conversations” about homosexuality, while the other openly admitted that she hid her promotion of homosexuality to the kids in what she called “social justice math.”

In his letter, Pontes called the refusal of religious accommodation to stop discrimination a “core value,” and said that he “would no more say yes to someone wanting a child excluded because of a discussion about LGBTQ than I would a discussion about race or gender. All human rights are rights, and all are equal.”

Pontes recognized that not allowing parents to opt their kids out of the controversial program is a move that will not be welcomed by many parents, stating: “Let’s be clear: Some in our community may not like this.” But he added that such parents “may choose to switch school systems … if so, that is a price we must be willing to pay.”

Last February when Education Minister Liz Sandals unveiled the updated sex-curriculum to much uproar from concerned parents, she attempted to assuage them by assuring them that they had the right to opt out their kids.

“It’s actually in the Education Act that a parent has the right to withdraw their child from content they don’t want their child to receive,” Sandals said in an interview with the National Post.

Parents in the Peel board may now have good grounds to bring a formal complaint against the board for ignoring the Ontario Education Act and a promise made by Sandals.

Tory MP Monte McNaughton, who is leading the Progressive Conservative charge against the sex-ed plan, sent a letter to Sandals yesterday, asking her to stand by her promise and with parents against the Peel Board.

“I am writing to you today to ask that you immediately clarify the specific process for parents to opt-out their children from the new sex-education curriculum, as parents across Ontario have relied upon your word on this matter,” he wrote.

He called the Peel Board’s decision “disturbing” saying that “parents know what’s best for their kids, not bureaucrats, not politicians, and not government.”

The Peel Board’s letter came out on the same day as thousands of concerned parents demonstrated in front of 103 of the 107 MPP constituency offices across Ontario, calling for the curriculum to be shelved.

The news comes on the heels of Quebec declaring earlier this week that parents will not be able to opt out children from its new pilot program for sex-ed that critics say promotes the early sexualization of children and indoctrinates children into accepting homosexuality. Life and family leaders say that pushing ideologically based sex-ed on young children will only further breakdown the natural family unit, the cell of society, and lead to moral chaos and social upheaval.

Lesbian: I use math class to teach young kids about homosexuality so I can ‘hide’ it from parents
Details of Peel Region Board legal threat against LifeSite

1
Here’s why I regret paying off my student loans
2
Radio host injured by COVID jab says media ‘don’t want to hear’ about adverse events
3
Abp. Viganò: Pope Francis has displayed ‘unequalled duplicity’ in his treatment of Cardinal Zen
4
With Roe v. Wade in the balance, Supreme Court announces next round of rulings coming Monday
5
Bishops silent as Catholic land worth $208 million earmarked for abortions in Ireland
Subscribe to Daily Headlines »