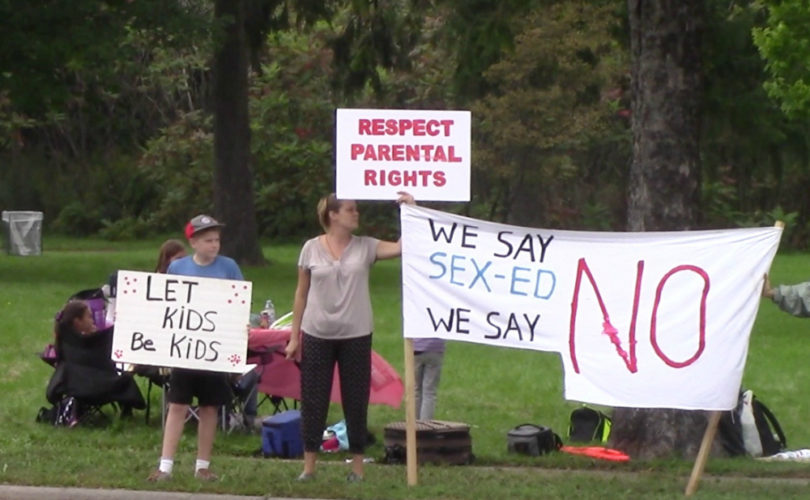 OSHAWA, ON, September 30, 2015 (LifeSiteNews) – Following a sex-ed strike Tuesday in which 25 students were pulled from ten schools in the Durham area, organizers have confirmed that parents from at least 11 school boards across Ontario will do likewise Thursday to protest the Liberal government’s controversial sex-ed curriculum.

And seven of these are Catholic boards, says Jack Fonseca, project manager for Campaign Life Coalition, who said that the grassroots coalition behind the province-wide strike, Canadian Families Alliance, will be holding a mid-day press conference to announce further parent strategies to stop Kathleen Wynne Liberals radical sex-ed agenda.

Maritza Sialer, spokesman for Durham Concerned Parents, which organized the September 29 strike in the Ajax-Whitby and Oshawa-Pickering areas, said that more than half of the students stayed home because of the rain, and a threatened thunderstorm.

Another ten were schooled in open-air classrooms, a tactic pioneered by Toronto’s Thorncliffe Parents Association, which concludes its groundbreaking 30-day September strike tomorrow.

The children gathered in Oshawa’s Goodman Park from 8:30 a.m. to 2:30, “when the rain started all over again,” Sialer told LifeSiteNews. “It was a long day.”

Two counter-protesters also showed up to argue the merits of the sex-education program with Sialer’s group. “It’s impossible to talk to them,” she said. “They are so blind.”

But Sialer noted that her group has been distributing the Campaign Life Coalition analysis of the sex-ed curriculum outside churches and schools. “It’s excellent information.”

Despite widespread parental opposition, the Wynne government rolled out the sex-ed curriculum in all the province’s publicly funded schools this September, sparking the Thorncliffe Park unprecedented 30-day student strike in her own riding of Don Valley West.

That strike has led to similar actions under the banner of “We are Thorncliffe” and which will culminate in the October 1 protest.

For more information on the province-wide October 1 “Empty the schools: We are Thorncliffe” student strike, go here.