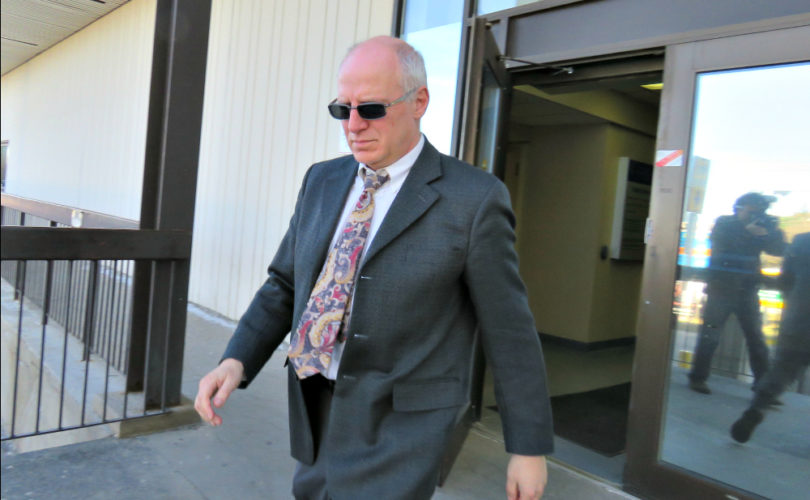 TORONTO, May 29, 2015 (LifeSiteNews.com) — Ben Levin, the man who “appeared to have it all,” was today sentenced to three years in prison for three child pornography offences.

The sentences will be served consecutively.

Dressed in a charcoal grey suit, grey shirt and no tie, Levin showed little emotion when he was handcuffed by the bailiff and taken out the side door following McArthur’s sentence, which took her an hour and fifteen minutes to read out to the packed court. “Mr. Levin, I wish you good luck,” McArthur said.

Levin will first be incarcerated at the maximum security Millhaven Institution in Bath, Ontario for classification, according to Crown prosecutor Allison Dellandrea, “and thereafter he will be placed according to his institutional needs.”

The once-tenured professor at Ontario’s Institute for Studies in Education had a “hidden, dark side” in a “depraved on-line world” as a “deviant mentor” who made “insidious attempts to normalize the sexual exploitation of children,” McArthur noted in her 23-page reasons for sentence.

And his expertise in “childhood education” made Levin’s “moral blameworthiness particularly high,” she stated.

Wynne and Education Minister Liz Sandals have consistently denied Levin’s influence on the curriculum, but Douglas says “parents are not falling for it.” Levin himself claimed in a 2010 interview: “I was the deputy minister of education. In that role, I was the chief civil servant. I was responsible for the operation of the Ministry of Education and everything that they do; I was brought in to implement the new education policy.”

Indeed, at that time, as Justice McArthur noted in her reasons for sentence, Levin “appeared to have it all.”

Happily married and father of three daughters, he traveled the world giving 40 or so speeches and writing upwards of 30 articles yearly and managing a dozen research projects as a tenured professor at the University of Toronto’s OISE.

But “unbeknownst to his friends” Levin became “deeply immersed in a deviant and depraved online world” which ultimately led to his arrest on July 8, 2013.

McArthur related how in 2010, Levin created a profile on an “alternative sexual lifestyle networking site” frequenting chat-rooms on “incest” and “teens.” He subsequently “came to the attention of three undercover officers.”

In the course of sex-chats with these officers, Levin “wrote a story detailing the violent sexual abuse of a child” and “counseled another officer, posing as a young mother, to sadistically sexually assault her eight-year-old daughter.”

“Mr. Levin’s offending behavior was not isolated or impulsive,” she said. He “collected child pornography over two years. He saved the first image in March 2011 and the last just weeks before his arrest.” Levin also had a list of about 1,750 online contacts with whom he communicated on “subversive sexual interests,” primarily “sexual contact between parents and children.”

In his sex-chats, Levin “normalized the subject of the sexual touching of children.”

McArthur noted that Levin knew that “the woman he was chatting with could, in fact, be a mother sexually interested in her eight-year-old daughter.” But he “knowingly counseled the ‘mother’ to sexually assault her daughter while aware of the unjustified risk” that what he counseled could in fact be committed “as a result of his conduct.”

“Mr. Levin recklessly pursued his own selfish, sexual urges, all the while knowing an innocent child could be abused as a result.  Mr. Levin’s moral blameworthiness is extremely high.”

The “sadistic overtones to the counseling adds a disturbing dimension to the offence,” McArthur stated, noting that psychiatrist Dr. Julian Gojer testified that Levin had a “pedophiliac interest in children” which was “intense” for three to four years. Gojer stated Levin “had sadistic impulses that seemed interwoven with his pedophilic interest” and “was on the extreme end of the sadomasochistic spectrum as it relates to the sexual abuse of children.”

Mitigating factors in sentencing were Levin’s pro-social past, his “extraordinary achievements,” the fact that he had been publicly shamed, that “his illustrious career is in tatters,” and that he is “genuinely remorseful” and has voluntarily entered treatment. Letters from family and friends show him to be “a man who is loved and admired by many.”  He is also “deemed a low risk to re-offend.”

A three-year sentence “is not unduly long or harsh” and “does not exceed Mr. Levin’s culpability,” McArthur stated.

She ordered that Levin’s DNA be added to the offenders’ databank, and that he be on the Sex Offender Information Registry for life.