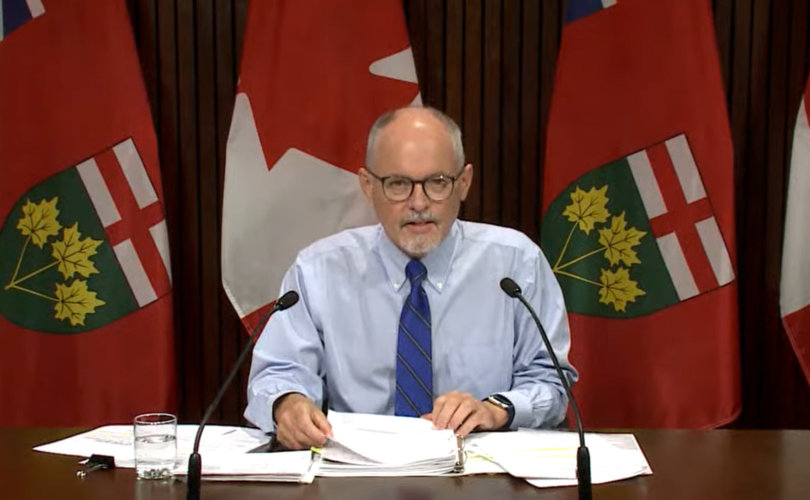 (LifeSiteNews) — The top medical officer for Ontario said young adults aged 18 to 24 should prefer Pfizer’s vaccine over the Moderna jab after increased reports of myocarditis and pericarditis.

“As we continue to push for our vaccination rates to increase, we’ve made the decision to issue a ‘preferential recommendation’ for the use of the Pfizer vaccine for individuals aged 18 to 24 years of age,” Kieran Moore, the chief medical officer of health of Ontario, said during a Wednesday briefing.

Moore said officials made the decision out of an “abundance of caution” after noticing a “very small … increase of pericarditis or myocarditis following vaccination with Moderna as compared to the Pfizer vaccine.” The problem is particularly prevalent in young male adults.

While Moore said that most cases of heart inflammation are easily treatable and mild, Canada and the U.S. have both seen the devastating effects of the jabs, particularly on young people.

People aged 12 to 24 years old make up only 20 percent of inoculations in Canada but account for “anywhere from 52% to 78% of all the myocarditis and pericarditis cases that have been linked to the injections,” LifeSiteNews wrote in its September 7 analysis of the report.

While Public Health Ontario’s report also sought to downplay the severity of the myocarditis and pericarditis cases, a Canadian medical professor has criticized the idea that there are mild cases of heart inflammation.

“Contrary to what a number of people have said, there is no such thing as ‘mild myocarditis,’” Dr. Steven Pelech said in an interview with the Western Standard. Pelech founded a pharmaceutical company and is a faculty member in the University of British Columbia’s medical school.

Myocarditis increases the probability of a heart attack later in life, Pelech explained.

“It’s the destruction of the myocytes, the heart cells that contract. When those cells die, they are not replaced in your body and are instead replaced by scar-tissue, which is from fibroblasts — skin cells which don’t have contractile activity, so the remaining muscle cells have to get a little bigger in order to compensate,” he said in the interview. “Every time you get an inflammatory response, you lose more of that contractility and have a greater chance of heart attack and other problems later in life.”

U.S. medical officials have also taken notice of the harms of myocarditis, with a federal vaccine advisor warning that males under the age of 40 are at a greater risk of hospitalization from the jab than from COVID.

Dr. Doran Fink, the Food and Drug Administration’s deputy director in its vaccine office, made the recommendation during a September 17 FDA meeting.

There is some risk “at all age groups,” Fink said, but under 40 years of age, the risk of hospitalization is higher from the jab than from contracting COVID.

The committee chair quickly cut Fink off after he made that point and said it would “ask Pfizer for comment” later on during the discussion.

Blood clotting issues led the drug safety agency to temporarily pause the use of the Johnson and Johnson jabs in April 2021, after women experienced a reaction.

The risks association with the J&J jab, compared to adverse reactions to COVID, convinced a blood specialist from the University of California San Francisco to declare “game over” with regard to its use in women ages 18–50.

“Covid is modifiable risk, but the [thrombosis] is non-modifiable once shot given,” Dr. Vinay Prasad explained in April.