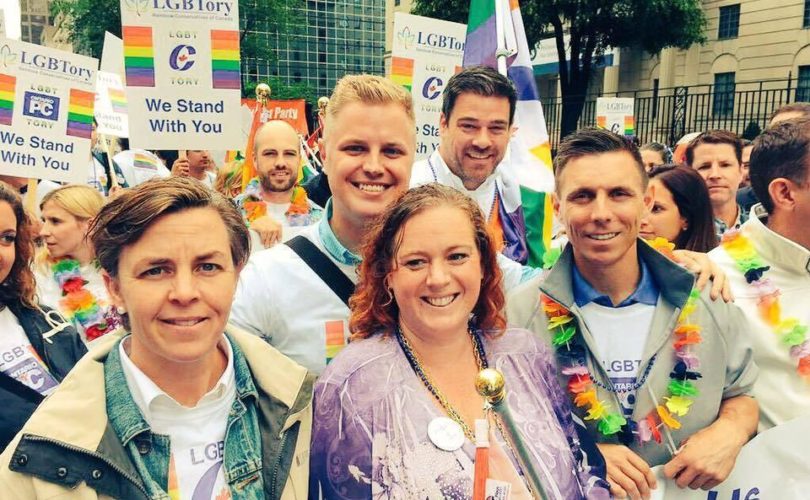 OTTAWA, September 1 (LifeSiteNews) – Ontario Tory MPP Lisa MacLeod has come out as a strong defender of LGBTory, an emergent group within the Ontario Progressive Conservative Party, stating as her reason that Conservatives stand for “equal rights.”

The MPP for Nepean-Carleton, who marched in the Ottawa Capital Pride Parade last month, stated in an op-ed in the Ottawa Citizen, “It should come as no surprise that any conservative prepared to stand up for the rule of law should also support the equality of all under it.”

“Someone needs to give a voice to the majority of conservatives who believe in equal rights,” MacLeod stated in her op-ed, “and who would rather spend their time talking about fixing things like the economy, health care and education as opposed to rolling back a marriage law passed a decade ago.”

MacLeod’s march in the Ottawa Pride parade follows her joining PC leader Patrick Brown, Carleton Mississippi Mills MPP Jack MacLaren, and federal Conservative MP, and Minister for both Labour and the Status of Women, Kelly Leitch in the first Conservative contingent to march in the Toronto Pride Parade in June, behind the LGBTory banner.

The Tory rush to embrace the LGBTQ lobby is understandable from a political point of view, says one pro-life, pro-family observer.

“Lisa Macleod and Patrick Brown are being faithful to their fiscal conservative base while trying to introduce Ontario voters to the Brown PC party,” says Johanne Brownrigg, the Ottawa lobbyist for Campaign Life Coalition. “I get it.”

But as Brownrigg pointed out, “Social conservatives believe in equal rights for all people, too, including the unborn, no exceptions.”

“What the LGBTQ activists are campaigning for however, is special rights, and where there is a conflict, their goal is to negate religious, parental and conscience rights,” she stated. “This should concern everyone whether it’s on their piece of land or not.”

MacLeod wrote that, “More than anything, it is important to the young conservatives who may be questioning their own sexuality and their place in our party that I march.”

The contentious issue of publicly embracing, as has MacLeod, the LGBT lobby highlights the different “position or theory or belief” held by diverse elements within the coalitions that Canadian Conservative parties, both federally and provincially, have always been, says Barry Cooper, professor of political science at the University of Calgary.

“There are obvious contradictions in the positions of theo-cons and so-cons and of them both with the libertarians,” he wrote in an email to LifeSiteNews. While politics deals with “very practical matters for which compromises are always necessary,” he says, the question of whether same-sex “marriage” is an equal right or a special right “expresses a position or a theory rather than a pragmatic compromise; it is an element in the coalition, not the coalition.”

“And, obviously, if one feels strongly about whatever position one takes,” he stated, “one then gets out of the coalition” and forms another one.

Meanwhile, LGBTory itself has been criticized as not being in good faith, according to the Ottawa Citizen.

About 200 people signed a petition to to ban LGBTory from Capital Pride’s Sunday, because it supports politicians – that is, Patrick Brown, now PC leader – who “have actively attempted to repeal same-sex marriage” and blocked transgender rights bills, and because the federal Conservative 2014 policy document supports “legislation defining marriage as the union of one man and one woman.”

LGBTory is also under fire for co-opting the letter T for Tory, thereby seeming to obliterate the “transgendered” community, the Citizen reported, an allegation denied by LGBTory spokesman Alex Lewis, who told the newspaper that: “It would not serve our interests to remove transgender individuals from our organization.”