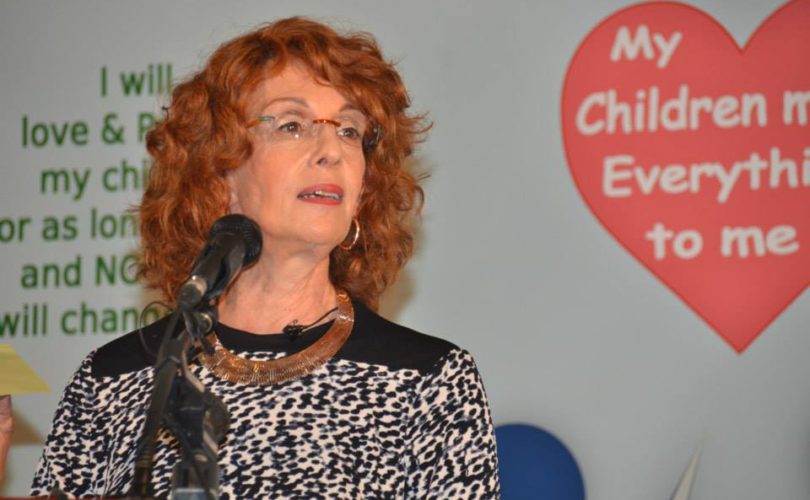 MISSISSAUGA, Ontario, August 19, 2015 (LifeSiteNews) – An American psychiatrist who has spoken and written extensively on sex-ed says the Ontario Liberal government’s sex-ed curriculum is not based in science but “entrenched in ideology,” and endangers children by not clearly presenting the consequences of sexual activity.

“The priority is not your child’s health,” Dr. Miriam Grossman told an enthusiastically grateful crowd of nearly 1,000 from numerous cultures and organizations in Mississauga last night, “The priority is to mould your child’s thinking and attitudes so they respect, affirm and are comfortable with all sexual choices and lifestyles.”

And while the curriculum’s view “may or may not be consistent” with parents’ values, “it most certainly is not based upon current knowledge about child and adolescent development, sexually transmitted disease, neuropsychology and many other areas,” she stated.

The New York-based child, adolescent and adult psychiatrist and author of “You’re teaching my kids WHAT?” and “Unprotected”, told the standing-room-only crowd Tuesday that it took three separate pleas from Ontario parents over the last six months to convince her to look into the Liberal government’s Grade 1 to 8 Health and Physical Education curriculum.

When she did so, Grossman was “amazed” – not by the curriculum, set to roll out in the province’s public funded schools this September – but by the groundswell of opposition to it.

“I’ve never seen anything like this,” she said, adding out that she’s seen many groups upset with sex-ed curricula across the United States, the UK, New Zealand and Australia. “So I absorbed all of this information for about 24 hours, especially the phenomenal grassroots campaign and I decided, I’m coming to Toronto,” which resulted in loud applause and cheers from the audience.

Grossman said she came to provide parents with “ammunition in your battle,” and her hour-long critique outlined the major flaws in a curriculum she described as “entrenched in ideology” and “centered on indoctrinating the child with its set of beliefs.”

“Adults have to teach children biological truths that could save their lives,” Grossman countered. “We can’t, for the sake of an idealized vision of what the world should be in someone’s mind, sacrifice the health and yes, sometimes the lives of young people.”

“And I have to say that that is what going on in this curriculum.”

She criticized the curriculum for introducing biological details at inappropriate ages, noting that in her professional opinion, teaching the names of genitalia in Grade 1 is “not necessary.” Six-year-olds are “very little and they’re innocent,” she said. “A child’s innocence and modesty comes naturally and should be protected.”

“What’s really going on in this curriculum is an attempt to desensitize children,” she said, pointing out that it “confuses sensitivity and modesty with shame and negative self-image.”

It is sufficient, in order to protect children against sexual predators, to teach them “that we all have private parts, those that are covered by a bathing suit,” and that “anyone who wants to see or touch you there, that’s a bad person” and “you scream and tell your parents.”

Grossman added that the American Academy of Child and Adolescent Psychiatry advises that in talking to their kids about sex, “parents should respond to the needs and curiosity level of their individual child, offering no more or less information than their child is asking for and is able to understand.”

Perhaps, she suggested, a copy of this document “should be passed along to [Premier] Kathleen Wynne.”

She noted that, in marked contrast to how it approaches matters like diet, alcohol and tobacco use, where “the language is straightforward” and “the tone is firm and authoritative, we adults know more than you and we are warning you about the consequences,” the curriculum presents sexual activity as something a child decides on.

Grade 6 students contemplating sexual relationships are advised to consider “my comfort level…my personal limits, and the limits and comfort of others.”

“As if a sixth grader can possibly know that?” Grossman said, adding that adults struggle with such concepts. “This is not developmentally appropriate.”

“The message here is that the child will decide when they are ready, instead of being told: You are not ready.”

“And you won’t be ready until you are an adult.”

This approach ignores neuroscience, which reveals that the part of the adolescent brain used for decision making, problem solving and understanding future consequences – the dorsal lateral pre-frontal cortex – is underdeveloped, and “won’t be fully mature until they’re in their 20s.”

Teens are not capable of thinking through consequences of their actions because, as one insurance company put it in an advertisement, “They're missing a part of their brain.”

And this approach to the “human development and sexual health” component is also based on the “Marxist” view of a “ideal world” where “no one group should suffer more than another as a result of their choices.”

“There is a significant flaw with this approach,” Grossman said. “It’s not based in reality. It’s a dream.”

And it’s one with serious consequences.

In her 12 years of practice at a clinic based in University of California in Los Angeles, one of the largest campuses in the United States, Grossman treated “thousands and thousands” of young people, mostly women, whose “suffering was 100 percent avoidable.”

They had had abortions, were afflicted with sexually transmitted infections, lived in fear of contracting HIV or getting cervical cancer and wanted to know why they hadn’t been told this would happen.

That started Grossman on her research, books and current campaign against what she sees as a politically correct medical profession, and a sex-ed industry motivated by an ideology that “people are sexual from cradle to grave and they should act on their sexual urges at any time.”

Because of the prevalence and acceptance of this ideology, in the United States, “another young person between the ages of 15 and 24 gets a sexually transmitted infection every 3.5 seconds.”

Grossman pointed out that if the Liberal curriculum used the same approach with sex education as it did with diet or smoking, it would clearly warn students that even having sex once could result in a sexually transmitted infection that is lifelong in duration, or in a pregnancy, or in an HIV infection “which sooner or later becomes AIDS, and AIDS will kill you.”

Girls are at greater risk in becoming sexually active because they have an immature cervix that is particularly vulnerable to infection from virus and bacteria, a fact confirmed by Atlanta's Centre for Disease Control and Prevention.

And they need to know this, Grossman said, scoffing at the curriculum’s suggestion that girls considering sexual activity should talk to their “partner.” So a “12- or 13 or 14-year-old girl is advised to talk to her boyfriend?” she pointed out. “It’s absurd. Who would think of that?”

She also faulted the curriculum for introducing students to “various forms of sexual expression” as if “all forms are the same risk,” but that is “simply false, that’s a lie.”

The difference lies in the physiological differences between the vagina, and the rectum. The vagina has thicker lining, more elastic tissue, natural lubrication, a lower PH which can inactivate the HIV virus, and mucus with anti-HIV proteins.

The rectum has thin lining that is easily torn, no natural lubrication and is abundant with M-cells “which capture the HIV virus and deliver it into the lymphatic system, which is exactly where you don’t want it.”

Grossman also debunked the idea that condoms afford protection, pointing out that rates of infections even with condom use are “very high,” and that the two most common viruses, herpes and the human papillomavirus, “lives on skin not covered by a condom.”

“Did biology change?” Grossman asked. “What changed is the culture.”

Grossman also attacked the Liberal sex-ed curriculum for its approach on “gender stereotypes” and its undermining of the traditional family.

“This, in my opinion, is the most radical and disturbing sentence in the entire curriculum,” she said, quoting: “‘Stereotypes are usually formed when we do not have enough information….Not everyone has a mother and a father — someone might have two mothers or two fathers…”' (Grade 6, p. 177.)

“Did I need to come all the way from New York” to tell people that everyone has a mother and father, Grossman asked, adding, “and the ideal situation is for a child to be raised by that mother and father.”

“The vision that is behind this sentence is that biological bonds are irrelevant…and that genetic relationships don’t matter.”

Grossman said she doesn’t dispute that there are many instances of loving parents who adopt, or use IVF technologies to build their families “but to deny the significance of the biological tie is preposterous.”

The International Declaration on the Rights of Children explicitly states a child has the right to be connected to his history, she said.

She also asserted that children conceived from anonymous sperm donors are speaking out. “And what they’re saying, many of them, is not at all pretty. They’re angry.” Many of these children believe that third-party reproduction should be more tightly regulated or “banned altogether.”

“I know the parents are in pain,” because they want a child and cannot conceive, Grossman said. “But the children come first.”

“I have many questions for Kathleen Wynne, but one of them is this, how is it that you acknowledge the pain and the tears of certain groups, but not others?”

She also criticized the curriculum’s warning against gender stereotypes, pointing out that current science is replete with myriad evidence of the “inborn and immutable” differences between the sexes.

“Every organ in the body is actually male or female,” she said, “because every cell” with the exception of red blood cells, “is imprinted with male or female because of the chromosomes,” with females XX, and males XY.

The mysterious male Y chromosome that was regarded as “a genetic wasteland” in the 60s, has now been mapped out in the human genome project, she said. That Y chromosome begins to have an effect on the brain’s development eight weeks after conception.

So “to tell kids that there’s nothing to the idea of gender stereotypes, that it’s all due to our culture and society that boys and girls, men and women behave differently” has “been proven false.”

Grossman concluded by urging opponents of the sex-ed curriculum to keep going, despite being ignored by the mainstream media or labeled “uneducated or a bigot,” pointing out that “science is in your corner” and that “parents know what’s best for their children, not educator activists.”

She also lauded them for their remarkable and well-coordinated efforts, which have included a 185,000-name petition, a school strike of over 35,000, and numerous rallies and protests.

Jotvinder Sodhi of HOWA Voice of Parents, which sponsored Grossman’s presentation with the support of Canadian Families Alliance (CFA) a grassroots coalition representing about 200,000 Ontarians, emceed the evening, which included brief presentations from representatives of CFA’s member groups.

Monte McNaughton, the outspoken Tory backbencher and only MPP to speak out in Queen’s Park against the curriculum, closed the night by thanking Grossman. Pointing out that he is the father of a two-year-old daughter, McNaughton reiterated his commitment to fight the Liberals’ sex-ed agenda, and emphasized that parents, not politicians, should decide what’s best for their children.

Campaign Life Coalition’s Jack Fonseca had earlier exhorted the crowd to take part in the province-wide mini-rallies at all MPP constituency offices September 2, to send a clear protest to the Liberal government.

Videos: US psychiatrist tells parents “stand firm” against dangerous sex-ed
How DO you to talk to kids about sex? US sex-ed critic gives practical tips