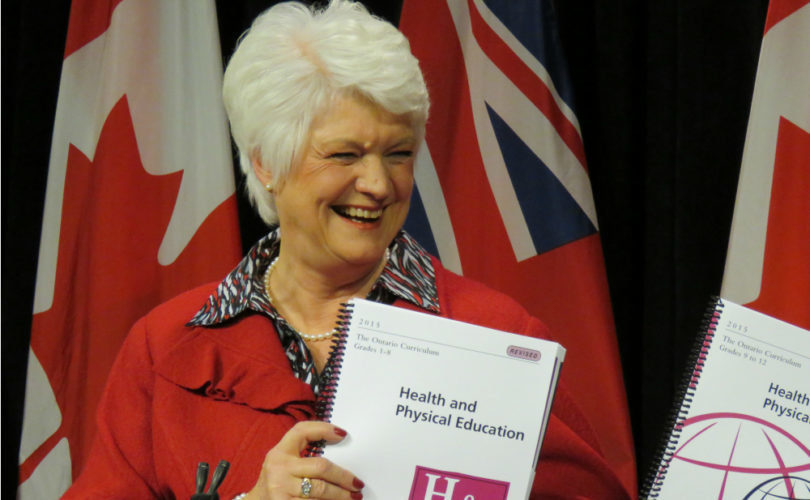 WATERLOO, Ontario, June 26, 2015 (LifeSiteNews) — Another Conservative MPP has gone to bat for constituents who oppose the Liberal government’s radical sex-ed curriculum, set to roll out in Ontario’s publicly-funded schools this September.

After the Waterloo Regional District School Board passed a motion to invite Minister of Education Liz Sandals to answer parents’ concerns about the sex-ed curriculum in person, MPP Michael Harris sent Sandals an open letter asking her to honor the request.

“I wanted to ensure that the minister heard loud and clear that this needs to happen,” the MPP for Kitchener-Conestoga told LifeSiteNews in a telephone interview. “I expect her to heed the wishes of a school board.”

In his letter, Harris wrote, “Given the fact that Ontario families were never allowed the voice they were promised in decisions over how this curriculum was developed and implemented, I encourage you to respond to the Board and take them up on their invitation as soon as possible.”

Trustees heard strong objections to the sex-ed curriculum from eight delegations during a June 15 meeting that was standing-room-only and often heated. But they voted down Cindy Watson’s motion asking for more thorough parental review and information sessions on the curriculum, as well as the release of data on the curriculum collected in surveys and focus groups.

The board opted instead to invite Sandals to visit in the fall to answer parents’ questions.

Watson admits she was disappointed her motion didn’t pass “but at the very least we’re asking the minister to come and have that public meeting with our parents,” she told LifeSiteNews.

Watson, who stressed that she didn’t speak on the board’s behalf but was giving her personal view, said she has “heard from a wide variety of parents, different cultures, I’ve heard from people who will say I’m a taxpayer, I’m a grandparent,” and the common lament is that “they all feel that there wasn’t enough consultation that was done.”

Parents also feel shut out by the press, she noted, “They feel that they’re not being represented in the media. They’re really feeling as though they’re not able to get their message out.”

That makes any political support particularly welcome. “I was very pleased that Michael Harris sent the letter in support of parents,” Watson said, “and I know that the parents were very pleased that he was vocal on their behalf.”

Campaign Life Coalition project manager Jack Fonseca also lauded Harris’s intervention. “It’s great news for parents to see yet another Progressive Conservative MPP take a stand for parental rights by calling out the Liberals on their total disrespect for parental rights, and their callous disregard for the well-being of children,” he noted.

“This also says that Harris has been hearing from parents in his riding, loud and clear, that they oppose this dangerous curriculum which promises to prematurely sexualize kids.”

Harris’s support of parental rights “goes back to what I’ve been calling for now back to last November,” says McNaughton, long a staunch opponent of the Liberals’ sex-ed agenda, and the only MPP to speak out against it in the provincial legislature. “The Liberal government needs to consult with parents and have meaningful consultations province-wide on the updates to the sex-ed curriculum.”

McNaughton, who says his main concerns are the age inappropriateness of much of the curriculum and the lack of parental consultation, points out that opposition is growing.

“I know, talking to my colleagues, that more and more parents are contacting MPP offices,” he told LifeSiteNews. “When 185,000 people sign a petition, then the premier and the education minister have to respect the concerns these parents have. Unfortunately we’re not seeing this government respecting parents.”

PC leader Patrick Brown “has been clear publicly that he wants to go back to the drawing board on the sex education update,” McNaughton added.

He has “serious concerns” about what will happen come September, noting that the teachers’ unions “are refusing to allow the teachers to receive the proper training,” and “we had tens of thousands of parents who kept their kids home from school at the end of the school year.”

“Quite frankly, we’re going to see that escalate in the fall,” he said. “This has been completely mishandled by the Liberal government since day one. They need to bring a complete halt to this until the due diligence is done.”

MPP Harris echoed this, stating that in general, Liberal “leadership and management has been a disaster.”

Harris says he talked to some of the Waterloo trustees, and “felt compelled on behalf of the parents who wrote me and those who haven’t written me who are concerned about the issue, that there’s been a motion passed,” and that Sandals “should comply with it.”

But it remains to be seen if that will happen.

“I’m hoping the minister will show up and have a question-and-answer period with these parents, so they’ll be able to share their concerns with her directly,” Watson said. “We’re just going to wait for the response from the minister.”

“If the education minister does show her face in Waterloo, she will likely try to stage handle the meeting so as to prevent parents from asking her tough questions on the most controversial elements of the curriculum,” he cautioned.

“As deceitful and belligerent as this Liberal regime has been, I wouldn’t put it past them to try screening questions. They might also stack the meeting with Liberal hacks, to toss her softball questions,” Fonseca observed. “I wouldn’t put it past the Waterloo District School Board to comply with a rigged meeting, given they voted down the original motion that parents really wanted.”

“The last thing parents need is another Liberal whitewashing session, so they have to be on guard it doesn’t descend into that.”