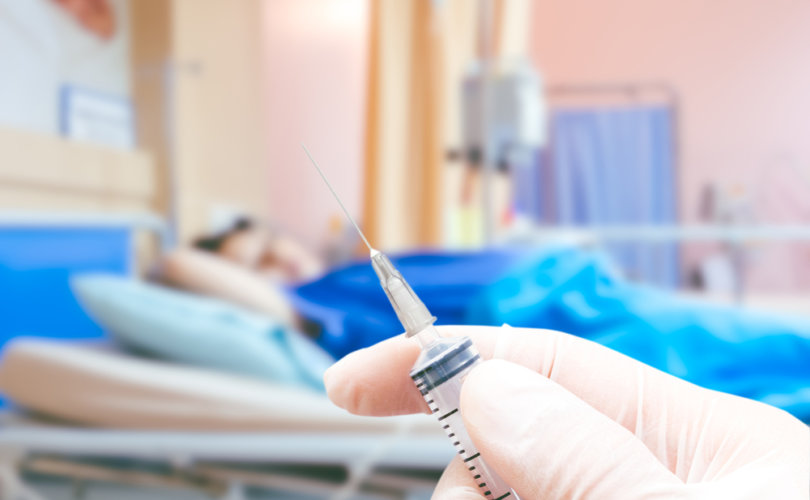 TORONTO, December 8, 2016 (LifeSiteNews) — Ontario’s Liberal government is backing the College of Physicians and Surgeons of Ontario in its unprecedented attack on doctors’ religious and conscience rights.

The Liberal government has intervened on behalf of the CPSO in a lawsuit launched by five Christian doctors, who argue that the College’s Professional Obligation and Human Rights Policy violates their Charter rights of religious freedom and conscience.

The CPSO policy, in effect since March 2015, compels doctors who oppose such practices as abortion, abortifacient contraception or euthanasia to refer patients who request these “medical services” to non-objecting, accessible colleagues.

The policy also forces doctors to “provide care in an emergency, where it is necessary to prevent imminent harm, even where that care conflicts with their conscience or religious beliefs.”

“Ontario is intervening to support the College of Physicians and Surgeons of Ontario, the independent body responsible for regulating the profession of medicine in Ontario,” confirmed Brendan Crawley, spokesperson for the Attorney General’s office, in an email to LifeSiteNews.

In other words, doctors who have “religious or conscientious objection to providing MAID” must provide an “effective referral” to a non-objecting, accessible doctor or agency.

“Ontario’s position is that these policies strike a reasonable balance between the sincerely held religious beliefs of objecting physicians and the important state interest in ensuring vulnerable patients are able to access legally available medical procedures,” Crawley stated. “As this matter is before the Courts, we cannot comment further.”

Progressive Conservative MPP Monte McNaughton blasted the College’s policy as “globally unprecedented” and pointed out it “may force doctors to choose between their profession and their faith, conscience or commitment to the Hippocratic oath.”

It’s also “unnecessary,” McNaughton told Queen’s Park on December 5, pointing out that there are “viable alternatives for the provision of effective access that would allow these healthcare professionals to continue to practice with ethical integrity.”

“I support doctors’ conscience rights, and I stand with the thousands of doctors and medical professionals across Ontario who are concerned about this new law,” said the MPP for Lambton-Kent-Middlesex, adding that the government should “take action to protect the integrity of our healthcare system and the rights of Ontario citizens.”

But the College, far from backing down, has come out swinging to defend its policy against the Charter challenge by the five doctors, who are co-litigants with three concerned associations, and now the Liberal government has its back.

Part of the College’s “aggressive” response has been to cross-examine the doctors, four of whom are Evangelical Christian and one Catholic, on their religious beliefs, noted Larry Worthen, executive director of the Christian Medical and Dental Society of Canada (CMDS).

CMDS is one of the co-plaintiff groups in the court action, along with the Canadian Physicians for Life, and the Canadian Federation of Catholic Physicians’ Societies.

The plaintiffs are arguing the CPSO policy violates their Section 2 Charter rights of freedom of religion and conscience, and Section 15 Charter guarantee against discrimination based on beliefs. Worthen expects the case will be heard sometime before June.

Worthen says the College’s questioning the doctors on their religious beliefs is “intimidation” and the Charter challenge is “huge.”

Moreover, the CPSO policy has made Ontario the only jurisdiction in the world, with the possible exception of Quebec, to force doctors to violate their religious beliefs and conscience for the alleged sake of providing access to patients.

“People’s careers are on the line. I don’t think it’s too dramatic to say the future of Christian healthcare is on the line,” he told LifeSiteNews. “The college could discipline people for following their consciences, and the end result is that Christians would be forced to change their practice or vacate medicine altogether.”

With the Liberal government intervening and the CPSO fighting so forcefully, the costs of the Charter challenge have increased dramatically, he said, with the litigants facing $55,000 more in legal costs than they budgeted for.

The Coalition for HealthCARE and Conscience, a national association of health care, Catholic and Christian organizations including the three groups involved in the lawsuit, is urging people to protest and to donate in support of the court case, said Worthen, who is also a spokesperson for the Coalition.

The Assembly of Catholic Bishops of Ontario is also urging people to support the fight for conscience rights, Worthen said.

“People need to know this is a very serious situation and the time has come to assist us,” he said, adding that the Coalition website, “Canadians for Conscience” includes information on writing letters the CPSO, Ontario’s minister of health, and attorney-general. People can also donate to the court action through the website.