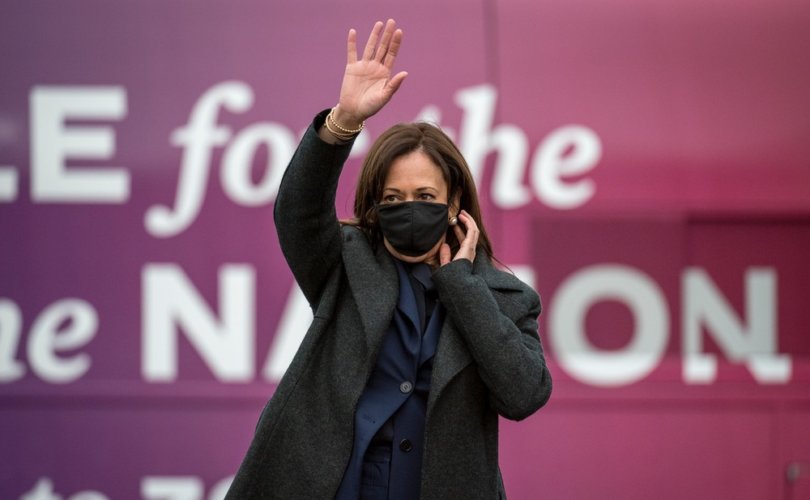 October 28, 2020 (LifeSiteNews) – Sen. Kamala Harris (D-CA) has followed in the footsteps of Joe Biden with a gaffe to match some of his most shocking.

“We’re looking at over 220 million Americans who just in the last several months died” of the coronavirus, said the vice presidential candidate.

According to the CDC COVID Data Tracker, Harris must have meant to say 220,000 but this mistake adds insult to injury continuing Joe Biden’s trend of name and number blunders.

In recent days Biden has referred to Sen. Harris’s husband as her wife.

Further footage shows Biden unsure of who he is or what he’s doing at all.

He and Harris have both referred to the “Harris-Biden Administration” on more than one occasion; this is possibly another gaffe, but some commentators believe they are unwittingly alluding to the Democratic Party’s plan should Biden be elected next week.

He knows he's just an empty vessel for the radical left! pic.twitter.com/z6kv22VXat

Biden also forgot who he was running against, suggesting a certain “George” was his opponent.

As far as Joe Biden is aware, he may be running for the Senate rather than the White House after all.

Joe Biden: “I'm running as a proud Democrat for the Senate” pic.twitter.com/7LTFdJQMgF

And while some of Biden and Harris’s bungles may be honest mistakes, some appear to be more blatantly deceptive.

When CBS journalist Norah O’Donell questioned Harris on the likelihood of her bringing a “socialist or progressive” perspective to the White House, Harris denied the possibility, but tried to laugh off the question so uncomfortably that many saw it as bad lying.

Sen. Kamala Harris busts out laughing at Norah O'Donnell's question if she presents a 'Socialist or Progressive perspective.' pic.twitter.com/LtNnrAIXng