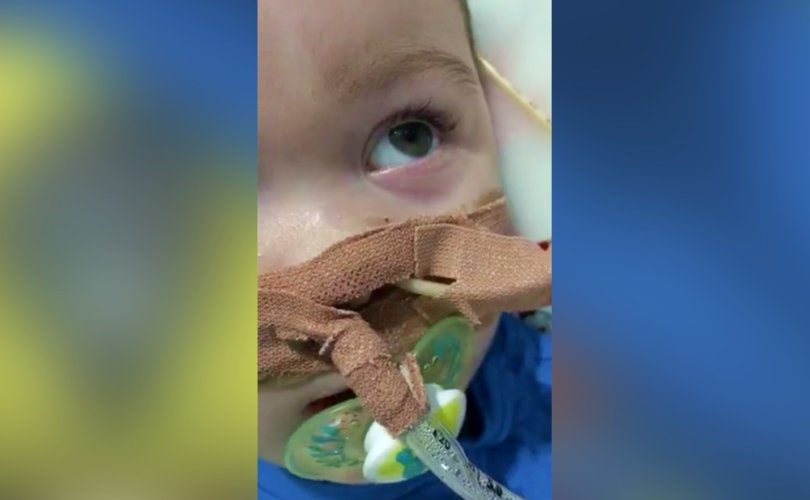 LONDON, April 28, 2018 (LifeSiteNews) — The nephew of a renowned German Catholic philosopher and fierce opponent of Hitler, Dietrich von Hildebrand (1889-1977), has written an open letter to the bishops of England and Wales denouncing their response to Alfie Evans as an “abject failure.”

In a letter dated April 27, London resident Jean Casey criticizes the bishops of England and Wales for praising Alder Hey hospital’s “integrity,” and for “completely failing” to uphold Catholic teaching on life, the family, and God-given parental rights.

Casey also excoriates the prelates for cozying up to the National Health Service (NHS) rather than serving the people entrusted to their care.

“It is ever more obvious that beyond the thousands of abortions they procure annually, NHS hospitals are becoming death mills not only for the unborn, but for the living. […] That our bishops continue to ally themselves with the NHS in defending the indefensible is beyond comprehension,” he writes.

“If Church leaders remain silent in the face of such “tyranny, injustice and oppression,” he adds, they become “accomplices of, and indeed, active participants in, gravely evil acts.”

Last Wednesday, just hours after Pope Francis tasked Italian prelate and former Vatican official, Bishop Francesco Cavina, with mediating relations between the Bambino Gesù hospital and the Holy See, to ensure Alfie’s transfer to Rome, the Bishops of England and Wales issued an official statement praising the judges and hospital for acting with “integrity” and “for Alfie’s good as they see it.”

The bishops also rejected as “unfounded” media reports criticizing Alder Hey hospital, saying their chaplaincy consistently cares for the staff and offered help to the family.

However, an internal memo from the Archdiocese of Liverpool leaked last week revealed that, while the archdiocese was offering support to Alder Hey doctors and hospital staff, they did not meet with the family on the grounds that “they are not Roman Catholic.”

Thomas and Alfie Evans are, in fact, both baptized Catholics, while Alfie’s mother, Kate James, is Anglican.

It also emerged on Thursday that Archbishop Malcolm McMahon of Liverpool, and Cardinal Vincent Nichols of Westminster, forced an Italian priest who was helping the family to return to his parish in London, leaving Alfie and his parents without spiritual care and support.

One notable exception to the silence was Bishop Philip Egan of Portsmouth, England, who on Monday expressed his support for Alfie and his parents, tweeting: “Let’s offer heartfelt prayers today for little Alfie Evans — now an Italian citizen — and his courageous parents. If there is anything at all that can be done, may the Lord enable us by His love and grace to effect it.”

Here below is his open letter to the bishops of England and Wales.

Though I can understand the desire to strike a conciliatory tone when both the stakes and emotions are running high, it is a gross understatement to call the wording of your declaration on the Alfie Evans case unfortunate, particularly given the emphasis on the apparent “integrity” of the medical staff and administrators of Alder Hey hospital.

A hospital that acts as a jail, imprisoning a child against his parents’ wishes and better judgement does not act with integrity.

A hospital that seeks a court injunction to prevent the parents from exercising their rightful duty to act in the best interests of their child does not act with integrity.

A hospital that refuses to call into question its (possible, if not likely, mis-) diagnosis does not act with integrity.

A hospital that seeks to oust a chaplain who is providing spiritual solace to a family in need and administering sacraments does not act with integrity.

A hospital that refuses to consider alternatives does not act with integrity.

A hospital that requests police presence to prevent parents from exercising their lawful right to remove their child from the hospital's care – threatening parents with a conviction of assault if they so much as touch their child – does not act with integrity.

A hospital that refuses to facilitate a meeting between its medical staff and the head of another hospital prepared to accept the child into its care does not act with integrity.

A hospital that fails to cooperate with other hospitals who send medical staff, equipment and transport to support the parents' wishes for alternative forms of treatment does not act with integrity.

A hospital that refuses to hydrate or feed a child does not act with integrity.

More importantly — and worse than the unfortunate choice of words used in your declaration — is its abject failure to address the heart of the matter: the privileged link between children and their parents as their God-given custodians.

No mention is made in the declaration of the sanctity and dignity of human life.

No mention is made of the rights of parents as the primary educators and sole legitimate custodians of the child.

No mention is made of the primary rights of parents — not the state, or medical doctors, or conflicted, unelected magistrates — to determine what they believe to be in the best interests of their child.

Because the declaration so completely fails to uphold Catholic teachings in regards of life and the family, it ought not be considered a Catholic declaration. To label it as such is intensely misleading.

It is ever more obvious that beyond the thousands of abortions they procure annually, NHS hospitals are becoming death mills not only for the unborn, but for the living. Every parent in the UK, Catholic or otherwise, will now rightly question whether by admitting their child to a NHS hospital, their child will ever again be allowed to leave and see the light of day. That our bishops continue to ally themselves with the NHS in defending the indefensible is beyond comprehension.

Whilst you may be tempted to characterise me and others who share my views as ‘simpletons’ whose intellectual faculties are insufficient to fully grasp the ethical and medical subtleties of the case, I will reply: I know tyranny when I see it. I know oppression when I see it. I know injustice when I see it. And so do many thousands of others across the world. If our Church leaders, meaning the collective you, remain silent in the face of such tyranny, oppression and injustice, then not only do they fail in their mission to proclaim the Gospel of Jesus Christ, not only do they fail to publicly uphold the sanctity and dignity of all human life, not only do they fail to defend the rights of parents as the primary educators and as the sole legitimate custodians of their children — each one of these being individually considered a serious sin of omission — but they also become accomplices of, and indeed, active participants in, gravely evil acts.

I regret to say that with the kind of leadership — or rather the complete absence of leadership our bishops are showing — in grave public cases where a powerful public witness in defense of life, the family and God-given parental rights is not only necessary but is indeed a moral obligation, it is no wonder the flock of practising Catholics is so rapidly dwindling. For who wants to follow such shepherds? For this to occur so soon after the Charlie Gard saga, and with an essentially identical outcome — namely, the complete lack of leadership, lack of conviction, and lack of courage we are seeing from our bishops, I am afraid to say I am ashamed to be an English Catholic.

As Edmund Burke said : ‘The only thing necessary for the triumph of evil is for good men to do nothing.’

With every hope that the Holy Spirit will prompt you to put into action the prophetic words of St. John Paul II : “If you want peace, work for justice. If you want justice, defend life. If you want life, embrace the truth the truth revealed by God.”