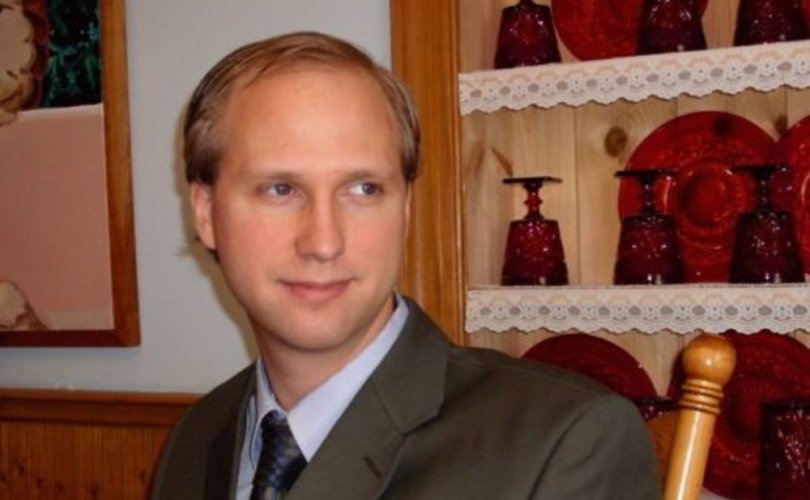 VIRGINIA, June 11, 2018 (LifeSiteNews) – A man running to represent Virginia in Congress who admits he is a pedophile wants to make adult-child sex, including incest, legal.

Convicted felon Nathan Larson is competing in the primary of Virginia’s 10th district as a Libertarian (the party says he’s been expelled). In addition to admitting to the Huffington Post that he is a pedophile, Larson is supportive of assisted suicide, white supremacy, and the legalization of child pornography.

He advocates for “legalizing early marriage” and ending age limits to holding office or voting.

“Since young women begin to enter their years of peak beauty and fertility before age 18, it is unreasonable and unrealistic to expect that they wait till that age before having sex and children,” Larson’s campaign manifesto says.

On May 31, the Huffington Post published an interview with Larson in which he confirmed he is a pedophile and ran online sites for pedophiles:

When asked whether he’s a pedophile or just writes about pedophilia, he said, “It’s a mix of both. When people go over the top there’s a grain of truth to what they say.”

Asked whether there was a “grain of truth” in his essay about father-daughter incest and another about raping his ex-wife repeatedly, he said yes, offering that plenty of women have rape fantasies.

On one of those sites, Larson wrote about his desire to “bang” his daughter, of whom he does not have custody; he’s also written “numerous posts endorsing child rape and other forms of sexual abuse,” the Huffington Post noted.

Larson confirmed to the Huffington Post that he wrote on one of those sites, “After sex with kids is legalized, parents (or other guardians) will still be gatekeepers to some extent, and a lot of them will want to bang their own kids and not share with others.”

Another website Larson ran advocated for “convicted or potential sex offenders to be able to kill themselves at clinics legally, according to cached images,” the Washington Post reported.

“Many of the other issues I mention above also are relevant to suicide rights,” Larson wrote in his manifesto. “Legalizing barbiturates, heavy machine guns, etc. makes available reliable and peaceful means of suicide for those who need them.”

His ex-wife committed suicide several years ago. When she was still alive, Larson raped her.

The felony of which Larson is convicted is threatening to kill the President of the United States. The threat was made in 2008, and the Washington Post reports it was against either former President Bush or Obama. Larson will be able to vote for himself thanks to former Governor Terry McAuliffe, who restored voting rights for felons.

In his campaign manifesto, archived on the web from his now-gone campaign website, Larson praised Adolf Hitler and detailed his support of white supremacy and Nazi ideology.

“At the end of the day, though, it is in the best interests of all races that whites defeat the Jews in the fight for supremacy in America,” he wrote.

The incumbent in Virginia’s 10th district is moderate Republican Barbara Comstock. She faces an uphill battle against whoever wins the Democratic primary tomorrow, as her district has swerved to the left.

Larson told the Washington Post he had collected the 1,000 signatures necessary to get on the ballot, but it does not appear he has filed a report with the Federal Election Committee, meaning he has raised little or no money.

Last week, news resurfaced that Disney hired a convicted pedophile to work on a kids’ TV show in 2006. The live-action talking-dog comedy Show Dogs was pulled from theaters last month after parents complained it groomed kids to submit to pedophiles. Academy Award-winning Call Me By Your Name, though, received much praise last year even though it was about man-boy sex.