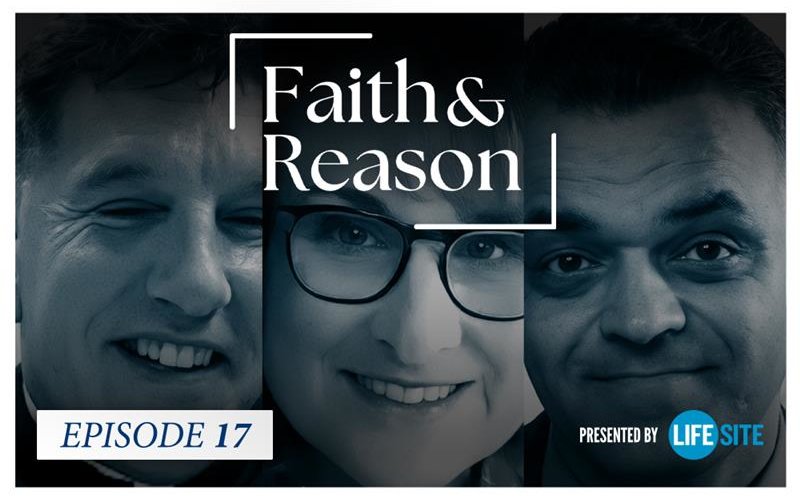 (LifeSiteNews) — On this week’s episode of Faith & Reason, the panel – which this time again includes Jack Maxey – discusses the breaking story of the aggressive pro-abortion group “Jane’s Revenge” threatening pro-life pregnancy centers, Jack Maxey’s work on the laptop in Switzerland and his return to the U.S., as well as Father James Altman’s response to the fact that his bishop who removed him from his parish gave, without explanation, a parish to Monsignor Jeffrey Burrill, who had been caught last year using the app for homosexuals “Grindr.”

In this episode, Liz Yore first presented the content of a new press release of “Jane’s Revenge,” which has claimed responsibility for various arson attacks and vandalism against pro-life pregnancy centers since the leak of a draft Supreme Court opinion that would overturn Roe v. Wade. Published on Tuesday, their press release declared “open season” on pro-life pregnancy crisis centers, adding that increasing “drastic measures” might not be “so easily cleaned up as fire and graffiti.”

The panel then discussed how such unconstitutional attacks are not being stopped by law enforcement. For Yore, these tactics are “classic leftist ideology and totalitarianism: when they don’t have their arguments to make, they default to violence.”

She called upon people to contact their local police and law enforcement to ask them to protect these pro-life pregnancy centers. It is piercing to see how even Supreme Court Justices are unprotected, and some of them have still young children, as John-Henry Westen pointed out, who are now being terrorized by the protests in front of their homes.

For Father Altman, this chaos “comes from godlessness cloaked in freedom.” It leads to “disorder.”

“When godlessness controls the day,” he explained, “evil reigns.”

Jack Maxey gave the panel an update on his work on the Hunter Biden laptop in Switzerland, which was in part stalled by the fact that just as he went to Switzerland in the middle of March, the country had abandoned its neutrality and joined closer ranks with U.S.-led NATO. Most likely due to the changed political atmosphere, a set of 250 Hunter Biden e-mails relating to the U.S. firm Metabiota with links to Ukrainian biolabs were deleted within about 30 hours.

Last year Jack Maxey had published on that same Swiss website – Swiss Transfer – a dump of Hunter Biden e-mails which had then not been deleted: this was one of the major reasons for him to travel to Switzerland and to work from there.

Moreover, as Maxey told the panel, the chief tech aide who helped him work on the Hunter Biden laptop and recovered an enormous amount of deleted material on the laptop – including some 80,000 photos – was under a lot of pressure and nearly had a nervous breakdown, so that Jack did not see it possible to ask him – a Swiss resident – to publish the entire laptop on a server, which could have led to liability problems. The fact that there is deleted material on the laptop, Maxey added, has now been confirmed by the Washington Examiner.

But as Maxey pointed out, the key was that when he went to Switzerland, “I told the New York Times and Washington Post, and within days the Post came out with an article and the New York Times said [the laptop] was true.” That alone is the reason why the “last two months have been very productive,” and the laptop is being discussed globally.

Liz Yore later pointed out that the now-recovered material, on which Maxey continues to work, contains “a huge cash of info that was previously not known.” She honored him for his continued and insistent work on the laptop, since this laptop is a “playbook of world corruption.”

The current theme of this show was that there is a certain lawlessness for the ruling elites, while the simple people are still being held accountable. “Hunter Biden could have been stopped by law enforcement” at multiple stations of his life, but wasn’t, Yore expounded.

The last topic of the episode dealt with the lawlessness within the Catholic Church: While Father Altman was asked to leave his parish for speaking up, Monsignor Jeffrey Burrill – the former general secretary of the USCCB who was caught using regularly Grindr, a social app for homosexuals – has now been given a parish by the same Wisconsin bishop, William P. Callahan.

Father Altman reported that he received many angry calls from people in light of this blatant injustice, and John-Henry Westen said that this situation was “impossible” and that he hopes that “this will not stand.” He hopes that many people will respond to this scandal and contact the bishop.