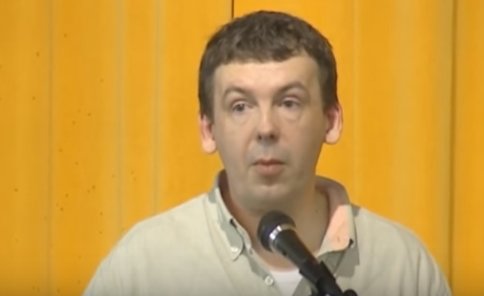 January 3, 2020 (LifeSiteNews) – An “out” gay priest who rejects the Church’s teaching on homosexuality shared his personal reaction to a phone call he claims he received from Pope Francis in which the Pontiff reportedly affirmed him as a homosexual priest.

In an article published by New Ways Ministry – a pro-LGBT Catholic organization that has been condemned by the U.S. Conference of Catholic Bishops – the openly homosexual priest also explained why he finally chose to make public the phone call.

Fr. James Alison, a 60-year-old former Dominican, revealed that he is the prominent gay theologian/priest who received a call from Pope Francis in 2017, as recounted in Frédéric Martel’s controversial book, In the Closet of the Vatican: Power, Homosexuality, Hypocrisy.

“I ‘sat’ with the knowledge of the phone call for over two years,” explained Alison. “I shared knowledge of it, of course, with a small group of friends, asking them to keep it to themselves. I had promised the Holy Father extreme discretion, and I did not want to expose him to any more hatred than he was already receiving.”

Alison said the call gave him determination to carry on as a priest despite the Congregation for the Clergy’s sentence ordering him not to teach, preach, or celebrate the sacraments.

So what changed to make me feel entitled to let the call be more widely known? The key factor was something my former novice-master, the bishop who had taken my letter to the Holy Father and pleaded with him to sort out my situation, told me in May 2019.

The Holy Father told him he had called me, describing the conversation to him in the same words as I had reported. Francis had thus deliberately created a witness to what he had done. It took me a little time for the significance of that to sink in, but it was this development that finally overcame any scruples I had about making the matter public.

By that time it was also clear from Francis’ reported reaction to Frederic Martel’s book on gay priests in the Vatican and from the fact that the same book had taken a great deal of the wind out of the sails of the closeted homophobes who opposed him, that he needed no protection from worried little me! That, and the freedom with which he was organising the Amazon Synod convinced me that I would do him no harm.

Alison first went public with his story when he penned an article for The Tablet in September 2019.

“I guess the story starts in 1994, when, fully six years a priest, it became clear to me that I could no longer pretend that there was anything wrong with same-sex love,” wrote Alison.

“The frightened boy who had accepted the official line that he was the bearer of something objectively disordered, and that therefore celibacy was an obligation, was finally growing up,” he claimed.

Alison suggests repentance not for homosexual behavior, but for obedience to Church teaching on homosexuality

The former Dominican believes that the Catholic Church has lied to those with same-sex attraction about the disordered nature of homosexual behavior.

“Any vows or promises undertaken when one party has been lying to the other are null,” he averred. “And in this case, church authority had been lying to me, as it has to so many others, with relation to who we are.”

“While individuals like me can repent of the ways we have allowed that lie to form our souls, the Roman congregations have no capacity to discuss or rectify their falsehood,” he said.

Genesis of the phone call from Pope Francis

The catalyst for the phone call from the Pope was a discussion that Alison’s former novice master – now a bishop – had with Pope Francis.

When Alison told his former Dominican novice master that the Vatican had removed him from ministry, his response was, “Absurd. It’s people like you they need outside at this time … I’ll request a private audience and ask him to sort it out.”

Eighteen months later, the Bishop presented to Pope Francis a letter written by Alison in which he asked to have his situation made regular, “not as a personal favor to me, but as part of opening up wider ministerial possibilities in the Church for LGBT people to speak, preach, evangelize, in the first person.”

Alison said the unexpected call came on Sunday, July 2, 2017, at about 3 p.m. Pope Francis told him:

Alison concluded from his conversation with Pope Francis that he had overturned the Congregation for Clergy’s judgment against him.

What does this extraordinary mercy mean, for me, and might it mean for others? At the very least, that the source of canonical order did not regard as binding his own Congregation’s sentence, since he clearly treated me as a priest, giving me universal jurisdiction to hear Confessions.

He then went on to extrapolate a broader meaning for all homosexual priests who live “double lives:”

And indeed, what of so many others more deserving than I? What about a Jubilee of Honesty for priests, inaugurated with an amnesty for double lives that are neither abusive nor criminal?

And not only for current priests, but for seminaries, where he feels that same-sex attracted young men discerning their vocations are lied to about the sinful nature of active homosexuality. He proposes:

A public accountability to honesty, especially of formators, as the principal factor in formation? The closet no longer forming and enforcing the closet?

More specifically, he suggests that bishops be given five years “to learn to overcome their inability to discern and negotiate” with homosexual priests.

Alison believes that there is no real “crisis of vocations” in the church today, and that instead there is a “crisis of discernment” by bishops “who have locked themselves into a self-reinforcing system of mendacity and thrown away the key” regarding the pastoring and formation of priests who might live homosexual lives.

Thanks to what he clearly views as his homosexuality-affirming phone call from Pope Francis, Alison foresees massive change in the Catholic Church and wonders:

Pope Francis has talked about this being a change of epoch rather than an epoch of change. What is going to be the shape of ministry in the Church that is being birthed?

Alison currently lives in Madrid, Spain, and continues to describe himself as a priest, theologian, lecturer and preacher.