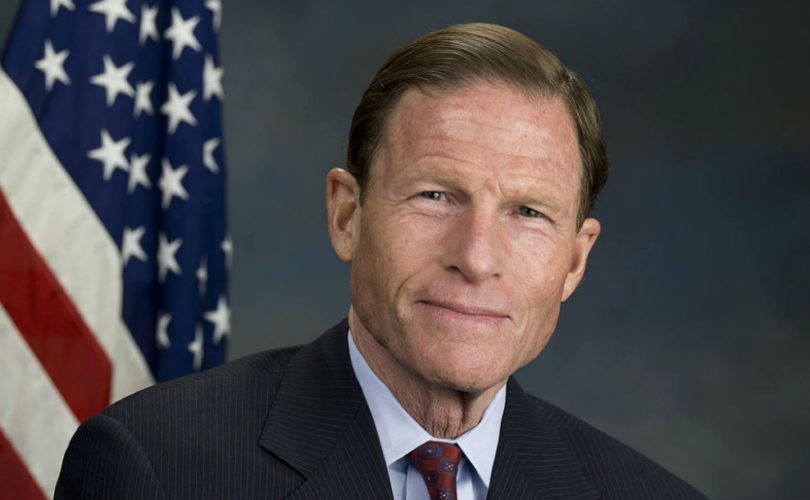 Immediately, Operation Rescue called for a retraction, pointing out that the Connecticut Democrat’s statement was “completely false and slanderous,” and demanded an apology.

Blumenthal also held up a “wanted” poster of abortionist George Tiller and falsely said it came from Operation Rescue. “This organization never circulated that poster, and never called for anyone to harm Dr. Tiller,” Operation Rescue's statement responded.

Blumenthal also falsely accused Operation Rescue of defending Tiller's murderer as a “political prisoner.” The group said in response, “Operation Rescue never made any such statement and has always been clear that murder or other violent acts are an unacceptable means of advocacy.”

Newman said Blumenthal “thinks he can lie about us with impunity and without consequences in order to advance his political agenda.” He added, “We are considering legal action to protect our good reputation.”

Operation Rescue denounced Tiller's murder as soon as it hit the news in 2009. While Operation Rescue did publicize Tiller's infamous and illegal late-term abortion services in the hopes that public pressure would encourage civil action against both Tiller and late-term abortion, it had nothing to do with and never in any way advocated violence against the abortionist.

“All accusations, implications, or inferences that there was any involvement by Operation Rescue in the death of George Tiller are completely false,” the website explained. An police investigation found Operation Rescue, Newman, and Newman's assistant, Cheryl Sullenger, as being completely innocent and having absolutely nothing to do with Tiller's killing.

On the day of Tiller's murder, Operation Rescue stated, “We are shocked at this morning’s disturbing news that Mr. Tiller was gunned down. Operation Rescue has worked for years through peaceful, legal means, and through the proper channels to see him brought to justice. We denounce vigilantism and the cowardly act that took place this morning. We pray for Mr. Tiller’s family that they will find comfort and healing that can only be found in Jesus Christ.”

Operation Rescue subsidiary AbortionDocs publishes the largest documentation on abortion industry abuses online. Its website states, “This site is meant for informational purposes to aid in the end of abortion through peaceful, legal means. It is in no way meant to encourage or incite violence of any kind against abortion clinics, abortionists, or their staff. We denounce acts of violence against abortion clinics and providers in the strongest terms.”

Priests for Life founder Fr. Frank Pavone has come to the defense of Operation Rescue in the past, when the organization has been falsely accused of advocating violence.

“Troy is completely committed to the principles at the foundation of our movement, including that of non-violence,” Fr. Pavone, who has worked with Newman for years, explained. “Those who see him as an enemy do so not because he is some kind of violent fanatic, but precisely because he is effective at what he does, namely, researching the weaknesses of the abortion industry and then using the legal system to make them accountable for their unscrupulous and dangerous practices.”

After hearing of the murder of Tiller in 2009, Newman said his organization “deplored” that violence because “the pro-life ethic is to value all human life from the moment of conception until natural death.”

The Operation Rescue website notes that despite the facts, false accusations continue to be raised against the organization. “Lies are told for the purpose of discrediting Newman and his organization, due to their success at exposing the wrongdoing committed by the Abortion Cartel,” the website states.

In fact, Operation Rescue has been the recipient of violence and death threats.

Pro-lifer Jim Poullion was murdered in cold blood while holding a pro-life sign on a public street three months after Tiller’s death. At the time, Newman stated, “We have received literally hundreds of death threats in the past three months. Our office has been vandalized three times.”

“We denounce violence in the strongest terms,” Newman reiterated. “The bloodshed must stop both inside and outside of the abortion clinics.”