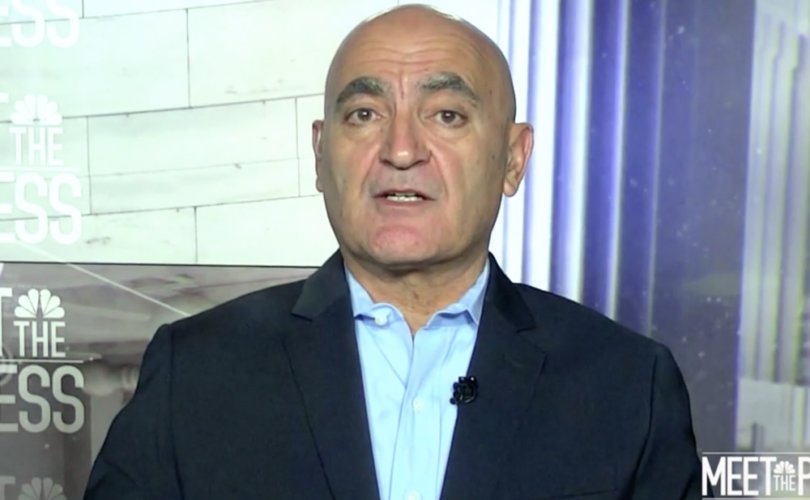 November 24, 2020 (LifeSiteNews) – The Chief Scientific Advisor of Trump’s Operation Warp Speed vaccine plan has urged trust in the vaccine, saying that approved vaccines could be issued even in mid-December, with an initial 20 million vaccinated even before the end of the year.

Dr. Moncef Slaoui gave his message in a number of TV interviews on Sunday morning, saying to ABC News that as part of Operation Warp Speed, “we are ready to start shipping vaccines within 24 hours from approval.”

This turnaround would result in people potentially being “immunized…within 48 hours from the approval.” With this swift rollout of vaccines, MedScape reports that up to “20 million” people could be given vaccines before the end of December, with a further 30 million people vaccinated each successive month.

As to the possible date for the arrival of the first vaccine, the Food and Drug Administration is meeting on December 10 to discuss approving the Pfizer vaccine, with vaccines possibly being given out as early as December 11.

Pfizer recently announced its pilot program in four American states in order to “refine the plan for the delivery and deployment” of the COVID-19 vaccine that the company is developing. President Donald Trump has even mentioned that the U.S. military would help to distribute a vaccine.

— Article continues below Petition —
PETITION: No to government and corporate penalties for refusing COVID-19 vaccine
Show Petition Text
103137 have signed the petition.
Let's get to 125000!
Thank you for signing this petition!
Add your signature:
Show Petition Text

In all his interviews, Slaoui dealt with questions regarding the safety of the vaccine, claiming that “this vaccine will be as safe as all the other vaccines that are being used in the population.”

However, he also re-iterated that he was completely unable to give any idea of the long-term safety: “what we are lacking is the long-term safety, just because it’s a fact; we can’t follow up for too long on these vaccines while one to two thousand people die every day.”

Despite Slaoui’s television testimony regarding the safety of the two proposed vaccines, Pfizer and Moderna, reports are emerging that the Pfizer vaccine is in fact having “severe” side effects upon this involved in the trials. Pfizer’s claim that the vaccine is over 90% effective, was also not substantiated through a peer review, but simply announced in a press release.

Pfizer’s statement mentioned 43,538 participants in its trials, but only 94 of those were confirmed as having COVID-19. LifeSiteNews has previously noted that as only 94 participants tested positive, it also appears difficult to generalize the vaccine is “more than 90% effective,” since some people might have been exposed to the virus more frequently, or for a longer time.

Continuing, Slaoui commented on reluctance to take such a vaccine: “I’m very, very concerned about the hesitancy [to receive a vaccine] as it exists, and I think it's very unfortunate because this has been exacerbated by the political context under which we have worked very hard…to make these vaccines available.”

“The vaccines have been developed as thoroughly and as scientifically as ever,” he added.

Slaoui attempted to persuade people to take the vaccine, despite the lack of evidence regarding potential long-term health impacts: “I would really urge people to listen to the experts, look at the data, keep their mind open, and hopefully accept to be immunized.”

One such expert is Dr. Michael Yeadon, the former Vice President and Chief Scientist of Pfizer. In recent writings and interviews, Yeadon slated the widespread push for universal vaccination, calling it “unnecessary.”

“There is absolutely no need for vaccines to extinguish the pandemic. I’ve never heard such nonsense talked about vaccines,” Yeadon said. “You do not vaccinate people who aren’t at risk from a disease. You also don’t set about planning to vaccinate millions of fit and healthy people with a vaccine that hasn’t been extensively tested on human subjects.”

Interestingly, the public trust of the produced vaccineshas actually fallen dramatically over the course of the year. Whilst in January, 69% of people surveyed were comfortable with a vaccine, in October that number was only 47%.

The figure is mirrored in a Gallup Poll, which found that 42% of people would reject a coronavirus vaccine.

Children of God for Life also says that the Moderna vaccine has been tested on a cell line of an aborted child.

PETITION: No to mandatory vaccination for the coronavirus

Doctors lay out plan to ‘punish’ people who refuse coronavirus vaccine: ‘There is no alternative’