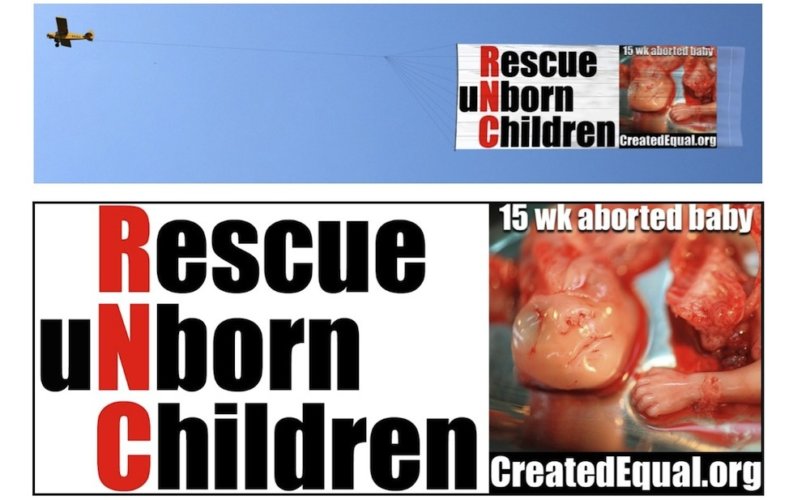 CLEVELAND, Ohio, July 14, 2016 (LifeSiteNews) — After being denied a permit to assemble in sidewalk space at the site of the Republican National Convention, a pro-life organization is going airborne instead to ensure the GOP has gotten the message urging it to defund Planned Parenthood in its 2016 platform.

Wednesday was the first day that aerial banners with the message “Rescue UNborn Children” flew over downtown Cleveland, where the convention will be held at Quicken Loans Arena.

The pro-life flights were scheduled to continue each day through the convention’s closing on July 21, flying at least for three hours each day, weather permitting. A 50’ x 100’ photo of a child aborted at 15 weeks accompanies the “Rescue UNborn Children” banner headline, however plans have been updated with a last minute flight ban from the FAA.

The aerial call to save the unborn from the skies over the GOP convention is the work of #OperationRNC, a pro-life coalition assembled by Created Equal, that also includes a Facebook page, public outreach, rallies, and prayer vigils in the days leading up to the convention.

“Created Equal is taking advantage of this historic opportunity to raise our voices for the preborn,” Created Equal National Director Mark Harrington said before the July 13 campaign launched. “We demand that the Republican Party continue to defend the preborn.”

The purpose of ‪#‎OperationRNC is to push for the $540 million in taxpayer funding that currently goes to Planned Parenthood to be redirected to 13,000 federally licensed health clinics “which provide true comprehensive women’s health care,” he said.

After word emerged by the afternoon of #OperationRNC’s first day that the GOP platform committee adopted strong pro-life language for approval at the convention — including for the first time halting federal funding for abortion providers, specifically naming Planned Parenthood — it appeared the #OperationRNC campaign was well on its way to succeeding.

“We are very pleased that the platform committee has heard the voice of the people by including a provision to defund Planned Parenthood in the platform,” Harrington told LifeSiteNews. “That’s the number-one goal.”

After calling on the pro-life community around the country some time ago to be part of the outreach effort at Republican Convention, Harrington said he began to hear from people and was joined by groups such as Operation Rescue, Christian Defense Coalition and Citizens for a Pro-life Society, with other groups and individuals coming on board.

But it wasn’t until the City of Cleveland denied the group’s permit for sidewalk space outside Quicken Loans Arena, giving security concerns as the reason, when the idea emerged to fly the “Rescue UNborn Children” banner over Cleveland.

The plan was then to fly the “Rescue UNborn Children” banner before 10 a.m. throughout downtown Cleveland and other times outside protected airspace over the arena throughout the convention, in keeping the FAA’s original constraints.

The FAA has since instituted a total fly ban on some 30-plus miles surrounding the convention site beginning 6 p.m. Sunday and lasting through Friday morning. This will limit the banner’s reach significantly and while Harrington said Created Equal’s lawyers are looking at possible redress in the matter, it’s not likely at this stage that anything could be done.

Instead, #OperationRNC is doubling up in its flights, now scheduling two each day over downtown Cleveland until Sunday.

Harrington said the banner has already gotten a lot of news coverage and reaction, so Cleveland’s denial of their sidewalk permit, and even to some degree the subsequent FAA flight ban, have actually born fruit by augmenting the media presence of #OperationRNC.

And this includes some who are upset by the image of the aborted child.

There are times when the reaction draws negative responses, Harrington continued, but that is also sometimes part of being a Christian and telling the truth about a culture that is killing its babies.

“We are prayerful, we come together,” he said. “We understand the reaction to what we’re doing.”

The group prayed outside the arena on Wednesday morning.

“We prayed for peace,” Harrington ssaid. “For the Cleveland police and everyone here for the convention. It was not just about abortion.”

Harrington also asks for prayers for the #OperationRNC effort from those who cannot be there in Cleveland.

The good news of the proposed pro-life language in the platform doesn’t mean the “Rescue UNborn Children” banner will stop flying through the Cleveland sky each day during the Republican convention.

“We want to remind the party that they are the pro-life party,” Harrington said. “And they need to take the platform seriously.”

A similar banner is planned for the Democrat National Convention next week in Philadelphia, Harrington said, with the message, “Defend UNborn Children.”