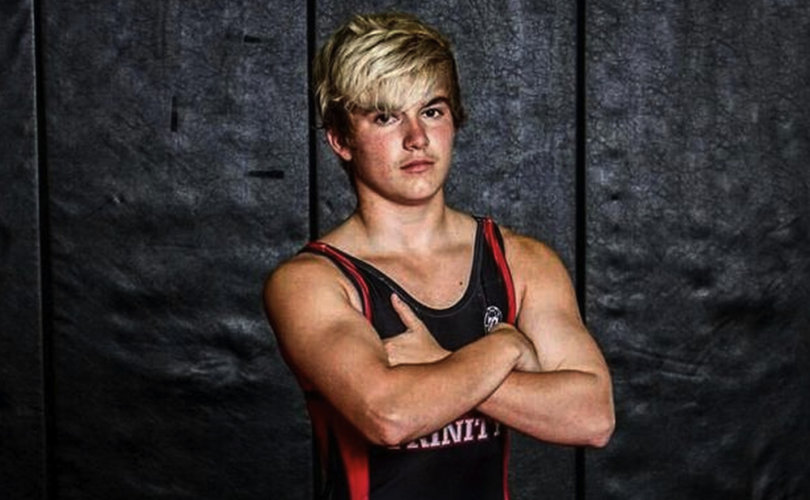 March 1, 2017 (LifeSiteNews) — Mack Beggs, a 17-year-old girl taking testosterone to fulfill her “transgender” dream of living as a “man,” won a Texas state wrestling title Saturday amid outcries that the competition was unfair because of her drug-induced physical advantages.

Beggs, a junior at the Trinity High School in Euless, Texas, defeated Chelsea Sanchez 12-2 to become state champion in the 110-pound girls weight class. Her photo reveals an upper body physique that is at some level the product of her drug-induced “masculinity,” with arms that look more like those of a boy than a typical girl, even a girl athlete.

She has taken the male hormone testosterone since October 2015, according to The Dallas Morning News. The newspaper reports matter-of-factly that Beggs “is taking testosterone while transitioning from female to male,” but social conservatives note that truly changing one’s sex (DNA) is impossible.

Beggs wanted to compete against boys but could not because the University Interscholastic League (UIL), which regulates sports in the Lone Star State, does not allow biological females to wrestle with boys.

In February 2016, Texas school superintendents voted 95 percent in favor (586-32) to add an amendment to the UIL constitution regarding student athletes: “Gender shall be determined based on a student's birth certificate. In cases where a student's birth certificate is unavailable, other similar government documents used for the purpose of identification may be substituted.”

“Transgender” activists condemned the new policy. In some states like Illinois, girls can and do compete against boys in high school wrestling (and other sports), although the issue is still controversial given the inherent differences between boys’ and girls’ bodies.

Ironically, the UIL changed the policy to keep “transgender” students, e.g., boys who want to live as “girls,” from competing on opposite-sex teams with their unnatural physical advantage. It was fought unsuccessfully by PFLAG and other LGBTQ activists for “transgender athletes,” who complained that getting one’s birth certificate “sex” listing changed to the opposite sex is a long and complicated process.

Beggs’ win at state made her undefeated (54-0) for the year and came after getting two “byes” in previous rounds because girls refused to wrestle her, ESPN reported. The pro-LGBTQ ESPN and other media referred to Beggs using a male pronoun, despite her female DNA.

This follows the “style” preferences of the Association of LGBTQ Journalists (NLGJA), which advises reporters: “Use the name and personal pronouns that are consistent with how the individual lives publicly.” NLGJA is an advocacy organization, although it denies that characterization.

The Dallas Morning News reported Feb. 18 on a lawsuit against the UIL by the parents of a girl wrestler at a competing Texas school, urging the sports body to suspend Beggs because she is using steroids. “The suit claims that allowing the transgender wrestler to compete while using testosterone exposes other athletes to ‘imminent threat of bodily harm,” the Morning News reported.

The plaintiff for the lawsuit “is bringing the case forward on behalf of his minor daughter and ‘other similarly situated female wrestlers’ in the state, according to the suit,” the newspaper reported. His daughter was not in Beggs’ weight class and so the two would not be competing.

Despite criticism of the policy, a UIL executive said the policy requiring all athletes to compete based on the sex listed on their birth certificate will likely not be changed, ESPN reported.

“Ninety-five percent of the school superintendents in Texas voted for the rule as it was proposed, which was to use birth certificates,” the UIL’s Jamey Harrison told the sports network. “So any rule can be reconsidered, but … given the overwhelming support for that rule, I don't expect it to change anytime soon.”

The Dallas Morning News article quotes Diane Ehrensaft, a “clinical and developmental psychologist and founding member of the Child and Adolescent Gender Center in California,” as saying that taking testosterone “can create physical effects such as face and body hair as well as increased muscle mass.” Results differ by individual, Ehrensaft said.

Texas pro-family education advocate Donna Garner said that despite the obvious unfairness of Beggs competing with normal, drug-free girls, the UIL decision “did exactly the right and biologically sound thing.” She commended the UIL for voting to use birth certificates to classify the sex of student-athletes — especially given the tiny number of “transgender” athletes in question.

“It is far wiser for the UIL to follow sound science based upon biological chromosomes than to get off on a tangent that would only apply to a small cadre of transgender people,” Garner told LifeSiteNews.

Robert Oscar Lopez, a professor of humanities at Southwestern Baptist Theological Seminary and the head of Mass Resistance-Texas, said the “transgender boy” wrestler story is part of a much bigger LGBTQ activist effort to transform his state.

“There is a very aggressive campaign on multiple fronts and involving many groups — led by the Human Rights Campaign — to push the LGBTQ agenda in Texas schools,” Lopez told LifeSiteNews. “This controversy must be understood in that context.”

Lopez himself is one of many victims of LGBT activism, having been drummed out of California State University, Northridge as a professor because of his politically incorrect views on homosexuality. Lopez, who was raised by two lesbians, is a vocal critic of same-sex parenting. He is despised by the homosexual media-pressure group GLAAD.