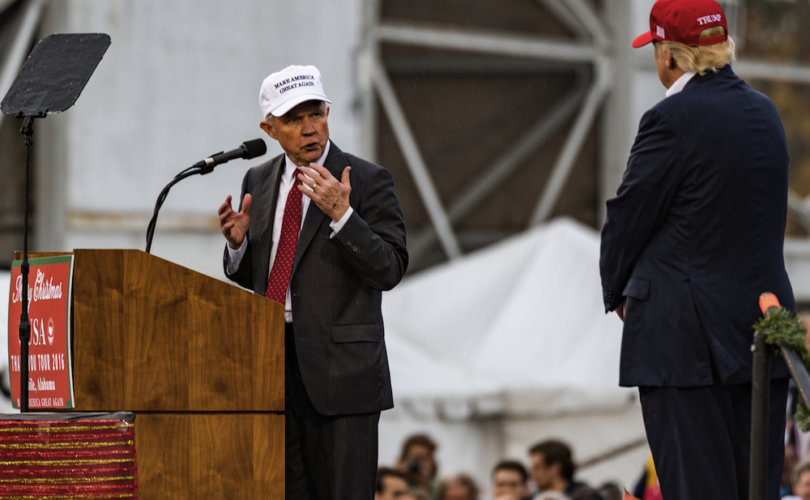 WASHINGTON, D.C., January 9, 2017 (LifeSiteNews) — President-elect Donald Trump has lived up to his campaign promises to nominate a pro-life cabinet, but his ideological enemies have zeroed in on one appointment hoping that a focused, full-scale assault on the man will derail his nomination.

Trump gave pro-life Senator Jeff Sessions the nod for Attorney General, and in response, pro-abortionist organizations across the country are using 30-year-old “rebuked and discredited” charges to try to ruin his character and thereby stall his confirmation in the Republican-controlled Senate.

Sen. Sessions is not only pro-life, but he voted yes on a constitutional ban of same-sex “marriage,” opposed the repeal of the “Don't Ask, Don't Tell” against open homosexuality in the military, and opposed hate crime legislation that criminalized free speech critical of the gay lifestyle. He favors stronger vetting of immigrants for extremism and has raised politically-incorrect concerns about organized voter fraud.

The hearing is scheduled for Tuesday, January 10. The two-decade Senator is well respected among his peers, and with the Senate under Republican control, is expected to be confirmed. Critics want more time to mount a public pressure campaign against him and are urging the Senate to delay or vote down his confirmation.

The National Abortion Federation (NAF) sent out a major call to abortion supporters to call Washington “and tell your Senators to stop Sessions!”

“Sessions has consistently opposed reproductive health, rights, and justice, voting 86 times against our issues during his 20 years in the Senate,” the pro-abortion encyclical pleads. “Sessions has been endorsed by the extremist anti-abortion group Operation Rescue.”

The NAF letter gives talking points and a script for pro-abortionists to use in their call to their senators, saying Sessions “cannot be trusted” and is “not fit to be Attorney General.”

The Philadelphia Tribune and a bevy of other liberal news organizations have joined the defamation campaign, coming out with scathing editorials renouncing Sessions and even uncharacteristically urging readers directly to call and “let your voice be heard to stop Sessions' confirmation,” complete with phone numbers for every key senator.

“Pennsylvanians must take a stand and call, write and email Sens. Pat Toomey and Bob Casey Jr. today and urge them to reject Sessions confirmation,” the Philadelphia paper wrote. “With enough political pressure, Session can be stopped from becoming the 84th U.S. Attorney General.”

Among the nation's newspaper editorials is The Washington Post's Commentary page with the headline, “Jeff Sessions’ Actions Alone are Disqualifying.”

The battle quickly spilled onto the Internet as well, with online news outlets ganging up against Sessions.  In a wildly swinging series of punches calling the Sessions nomination process a “disgrace,” Barrett Holmes Pitner of the Daily Beast accused the Senate of an “institutionalized level of corruption and cronyism in which government officials are more interested in giving lofty promotions to their unqualified friends than they are with the well-being of the American people.”

Even a YouTube video by the abortion-supporting organization MoveOn.org entitled “Stop Jeff Sessions” calls his confirmation “a real danger to the American people” and characterizes Sessions as “unfit to be attorney general.”

With a flair for the melodramatic, the president of the NAACP and the group's state leader rounded up members and illegally took over Sessions' Mobile, Alabama, office last week, saying they would not leave until Sessions quit. National NAACP President Cornell William Brooks told the press, “We have an Attorney General nominee who … mouth(s) faith in the myth of voter fraud.”

Other demonstrations by abortion supporting groups were held nationwide. Occupy NH Seacoast and People for the American Way held an anti-Sessions demonstration on Sunday in Market Square, calling on Senators Maggie Hassan and Jeanne Shaheen to stop the Sessions confirmation.

Abortion and gay agenda activists were joined by marijuana advocates mobilizing their supporters against the Sessions confirmation. On Monday, the pot-promoting group NORML launched a national “Day of Action” to “flood” senators' phone lines “to demand that Sessions not be confirmed” because he has spoken publicly against the legalization of recreational marijuana.

The nation's liberal academics took up their pens as arms as well. A letter against Sessions was made public last week, claiming to represent more than 1,100 law school professors from 170 law schools in 48 states, urging the Senate to deny Sessions.

The group dubbed “Alliance for Justice” compiled a 43-page anti-Sessions document commenting on the significance of the questions left blank on Sessions' questionnaire.

The Muslim group Council on American-Islamic Relations (CAIR) announced its opposition to Sessions because he criticized Obama's open immigration policy as too permissive and advocated “slowing down” the flood of Islamic immigrants until they can be better vetted for extremists. Following the established pattern, CAIR lists senators' phone numbers and instructs supporters to call and tell their senators to turn down the Sessions confirmation.

Sen. Sessions is particularly opposed by CAIR because last June he openly stated on FOX News Sunday that Radical Islam is “a real part of the threat that we face,” and “there is an extremist element within Islam that's dangerous to the world and has to be confronted.”

In an ironic twist, some of the people who ridiculed Trump for suggesting that elections can be “rigged” are now saying Sessions' confirmation vote is “rigged.” Infamous preacher Al Sharpton and other self-designated civil rights leaders demanded more time for a more “thorough vetting” of Sessions, accusing the Senate of “rigging” Sessions' confirmation.

Sharpton ominously predicted that the “occupy” protest/press conference was not a “one-off,” because the NAACP will not relent. “There will be season of civil disobedience around the Sessions nomination,” he warned.

Sessions was nominated by President Reagan for a federal judgeship in 1986, but liberal senators stopped his nomination in its tracks on charges that he offhandedly referred to an opposing black attorney as “boy,” once said the NAACP was “un-American,” and called liberal organizations “communist-inspired.”

Not only Sessions did deny the charge of racism, but Barry Kowalski, a retired Justice Department civil rights attorney in Washington who worked with Sessions during the time in question, said he never heard Sessions call any man “boy,” or any racist term.

Supporters say Sessions was “Borked” at his 1986 judicial appointment hearing. Politico called it a “kangaroo trial,” with accusers not even “trying to back up their allegations.”

Supporters of the Attorney General nominee point to his record as a defender of civil rights and note that he has the full support of black elected officials who know him and have worked with him.

Sarah Isgur Flores, a spokeswoman for Sessions' confirmation, summarized, “From the Fraternal Order of Police and the National Sheriffs Association to civil rights leaders and African-American elected officials, to victims' rights organizations, Senator Sessions has inspired confidence from people across the country that he will return the Department of Justice to an agency the American people can be proud of once again.”

Indeed, black leaders who have worked with Sessions have come out in support. “The man I know is an upright individual, who is honest, who is forthright,” Mobile Mayor Sandy Stimpson stated. William Smith, who was chief counsel to Sessions in the Senate, called him a man “of the highest character.” Greg Griffin, a black Alabama judge who worked with Sessions when Sessions served as Alabama's Attorney General, confirmed that Sessions “always treated me with respect” and said Sessions was “one of the best bosses I ever had.”

Former Deputy U.S. Attorney General Larry Thompson, an African American who has known Sessions for more than 30 years, said, “He doesn’t have a racist bone in his body.”  Thompson said that Sessions was extraordinarily solicitous of his work, and they roomed together while traveling.

Even Perry County (Alabama) Commissioner Albert Turner, whose parents Sessions once prosecuted for voter fraud, said, “He is not a racist. … He was a prosecutor at the federal level with a job to do.”

In another example of how elections matter, Republicans now enjoy a majority with 52 seats in the Senate, so they have confirmation sewn up, as long as there are no defections. Ironically, in 2013, the Democratic majority axed a Senate rule that required at least 60 votes to stop a filibuster on Cabinet-level appointments.

In the end, it could turn out to be much ado about nothing. “The Sessions confirmation battle is sure to generate lots of heat and very little light,” Politico predicts. “Sessions will likely prevail, but not before his name is dragged through the gutter in an execrable exercise in contemporary racial politics.”

One conservative commenter noted, “Maybe that's the point: raise so much slander that either Sessions' confirmation is hindered, or his term as Attorney General is.”