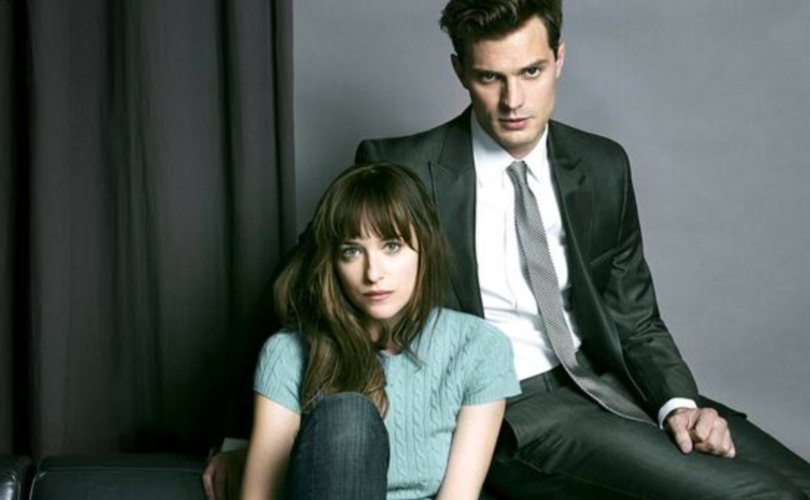 Real women 'don’t end up like Anastasia; they often end up in a women’s shelter, on the run for years or dead,' says the National Center on Sexual Exploitation.

February 4, 2015 (LifeSiteNews.com) – Marketing for the Valentine’s Weekend release of 50 Shades of Grey is in full swing, and booming pre-ticket sales suggest that the millions of fans of the novel plan on showing up in force when theater doors open.

At the same time, opposition to the film is growing as anti-porn activists and advocates against domestic abuse have been ramping up their own campaigns to raise awareness about what they say are the harmful effects of the 50 Shades phenomenon. This includes a grassroots effort by social conservatives to promote their own 50 Shades alternative – the independently produced, and shamelessly wholesome “Old Fashioned,” also set to be released this Valentine’s Weekend.

The anti-porn angle received an added boost this week in the form of early reports suggesting that the movie is set to be one of the most sexually graphic R-rated films released in years – reportedly with a full 20 minutes, or one-fifth, of the movie to be taken up with graphic sex scenes.

But while the filmmakers reportedly had to tone down the explicitness of some of those scenes in order to earn the “R” rating, rather than the potentially ticket-sales-killing 18A rating, the MPAA nevertheless warns that the film contains “graphic nudity” and “unusual behavior.”

The latter phrase is almost certainly a reference to the film’s depiction of the sado-masochistic sexual practices that are featured so prominently in the book – and which have been subject to criticism from social conservatives and feminists alike, due in part to the way the book blurs the line between consent and abuse.

So far over 45,000 people having signed one petition pledging to boycott the film, accusing the film and the books of promoting “misogyny, abuse, and sado-masochism under the guise of ‘romance.’”

“This Valentine's Day I will instead be taking a stand for true romance, and will be boycotting the 50 Shades of Grey movie, and encouraging others to do the same,” reads the petition.

Meanwhile, a campaign led by the National Center on Sexual Exploitation (NCSE), which is beginning to garner some media attention, urges movie-goers to boycott the film, and to take the money they might have spent and send it to shelters for battered women instead.

Real women “don’t end up like Anastasia; they often end up in a women’s shelter, on the run for years or dead,” said the NCSE, which is running the #50DollarsNot50Shades campaign.

“The money you would have spent on movie tickets and a baby-sitter or movie tickets, popcorn and drinks will go towards serving victims of abusive relationships like the one glamorized in the 50 Shades series,” said the campaign’s Facebook page. “Hollywood doesn’t need your money; abused women do.”

The director, writer, and lead actor of Old Fashioned, Rik Swartzwelder, told LifeSiteNews blogger Matt Fradd this week that he believes people are craving for an alternative to the bleak world depicted in 50 Shades, and he hopes his film can help fill that void.

“I think there is currently a unique and growing longing for authenticity and innocence in our culture,” he said. “Our non-stop access to media and images and data — all at increasing speeds and via endless technological devices — has us feeling a little beaten up, exhausted.

“Our pace of life, in general, is grinding us down. We really can’t push the envelope much further at all when it comes to entertainment. Some days it feels like our culture itself is about to actually, finally, 'jump the shark.'”

Swartzwelder encouraged people concerned about the 50 Shades phenomenon to get behind Old Fashioned, and other independent films that present a more positive worldview. “If we don’t like the stories that are being told, we just can’t sit back and whine about it,” he said. “We have to be out there, in the thick of things, doing all we can to offer up positive alternatives.

“And if we’re not willing to do that, we have no right to complain or critique those that are willing to make the sacrifices necessary to get their stories into the public arena.”