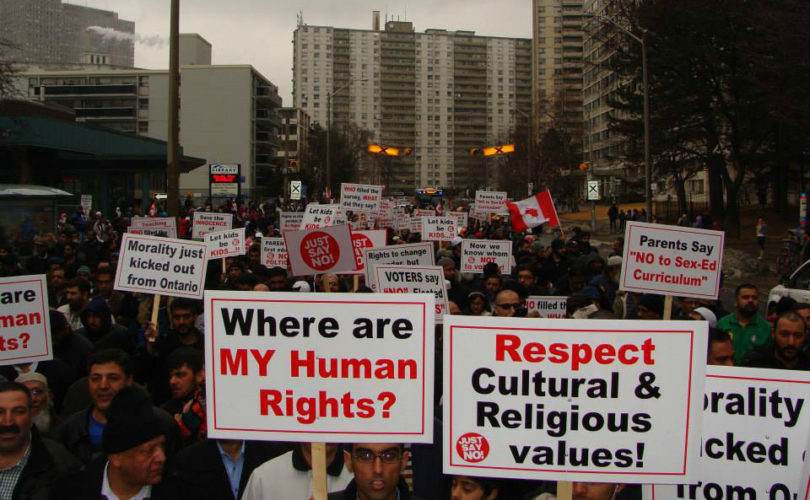 Opposition to the Liberals’ controversial sex-ed curriculum rose by seven percent among Ontario voters in the last two months, according to a May 1 Forum Research poll.

“It appears those opposed to the new health education curriculum are getting their message heard,” Forum president Lorne Bozinoff commented on the May 1 poll. “They are well-organized, and have access to parent and school groups, where a lot of community information is spread.”

“I’m not surprised at all,” says Jack Fonseca of Campaign Life Coalition of the poll results, which Forum estimates to have a three percent margin of error, 19 times out of 20. “We are seeing opposition grow rapidly in many parts of the province as more and more parents learn what is actually in the curriculum.”

“This is a significant poll because it shows that the public is moving rapidly to have a negative view of the curriculum,” he told LifeSiteNews, adding that the numbers for and against the radical sex-ed curriculum are now “practically even.”

“In fact, given the pollster likely asked the question in a way that was favourable to the Liberal government, as pollsters always do, I suspect the public’s opposition is actually quite a bit higher than this Forum poll reveals. The momentum is clearly on the side of parents, and against this scandalous Liberal regime.”

In an almost real-time confirmation of the poll’s findings, two more of many past and future protests against the Liberals’ reviled sex-ed curriculum took place May 3.

An estimated 1,500 people took part in a Mississauga march organized by Voice of Parents and the Coalition of Concerned Parents. In Malton, 25 protesters representing HOWA Voice of Parents distributed anti-sex-ed flyers among 60,000 people at a Sikh Khalsa celebration, attended by Ontario Premier Kathleen Wynne, who has personally drawn the ire of protestors.

And today begins a week-long strike in which parents are pulling their kids from school.

Nevertheless, the openly lesbian Wynne remains adamant that the Liberals’ increasingly opposed sex-ed curriculum will be rolled out in the provinces’ schools this fall.

In the mean time, another Forum poll released May 1 shows Wynne’s popularity plummeting.

Of 912 randomly selected Ontario voters, more than one third, or 36 percent, said they would vote Progressive Conservative if an election were held now.

Fewer than three in ten respondents said they would vote Liberal.

The Forum report stated Wynne’s approval rating fell to 29 percent from 33 percent last month, “and her net favourable score (approve minus disapprove) is a dismal -30, down from -20 last month.”

According to a statement by Forum’s Bozinoff: “It’s easy to hate on a majority government in mid-term, there’s no chance you’re going to have to actually vote for someone. Nonetheless, the decline in Kathleen Wynne’s favourables, usually better than the party’s, has to be a concern for her team.”

CLC’s Fonseca agrees. “I really hope backbench Liberal MPPs see these poll numbers and start talking about replacing their party leader for fear of being dumped by voters in the 2018 election,” he told LifeSiteNews. “It happened in Alberta with former Premier Alison Redford. Her own caucus forced her out of the party because her numerous scandals were going to impact them personally in the next election.”

“Why not with Kathleen Wynne?  I think parents ought to focus on Liberal MPPs and urge them to kick Kathleen out of caucus, or else!”

In fact, a petition is now circulating calling for a “vote of no confidence” on Premier Wynne and her resignation for, among other things, “false and misleading statements to Ontario Parents that they were consulted prior to the Sex Ed curriculum.”