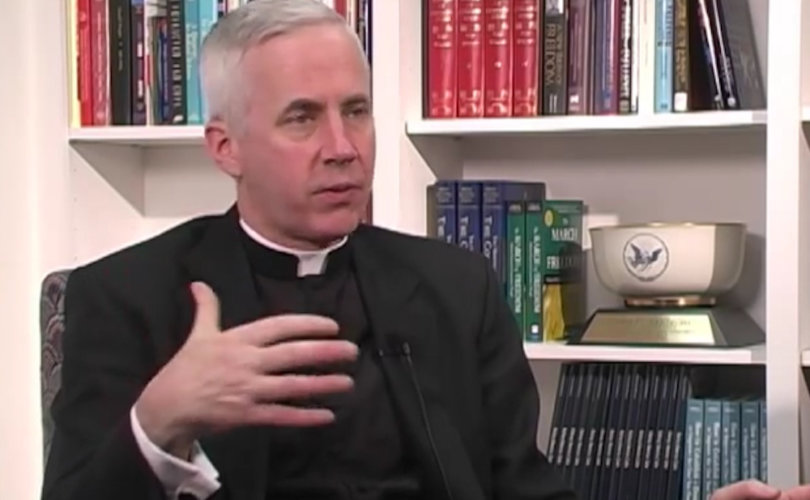 The abuse was reported in 2002 by a woman who told The Washington Post that McCloskey had groped her several times during pastoral counseling sessions regarding her marriage and serious depression.

Perhaps most significantly, McCloskey is credited with evangelizing powerful men and women and shepherding them into or back to the Catholic Church, including former House Speaker Newt Gingrich; TV and radio host who is now President Trump’s top economic adviser, Larry Kudlow; former U.S. senator and Kansas governor Sam Brownback, now serving as United States Ambassador-at-Large for the U.S. Commission on International Religious Freedom; “Crossfire” co-host and columnist, Robert Novak, and Fox TV host Laura Ingraham, among many others.

For years, Catholics have wondered what happened to Fr. McCloskey, who at the height of his influence at the intersection of Catholicism and conservative politics and culture seemed to have vanished without explanation from the public eye, leading to much speculation.

In a statement issued by Msgr. Thomas Bohlin, Vicar of Opus Dei in the United States, the chain of events regarding Fr. McCloskey’s ministry after the woman’s complaint to the prelature was revealed.

McCloskey was directed “to give spiritual direction to women only in a traditional confessional (the norm for Opus Dei priests) and to end his contact with the woman in question.”

“After investigating the complaint in subsequent months, we found the complaint to be credible, and in December 2003, Father McCloskey was removed from his position at the CIC,” said Msgr. Bohlin.

“In the years since Father McCloskey’s removal from the CIC, his priestly activities with women have been very limited because of the restrictions we placed as well as his declining health,” added Msgr. Bohlin. Fr. McCloskey “had very few assignments in our activities for women (Opus Dei's activities are separate for men and for women) and his contact with individual women was limited to the confessional. Throughout the years, we were careful to ensure that he would not have any opportunities to engage in the kind of actions that led to the complaint.”

The statement from Opus Dei also noted that the prelature is now investigating the report of another woman who may have also suffered from Father McCloskey’s actions at the CIC.

Social media reflected shock at the revelations by many, but not all.

“Whatever happened to Fr. C. John McCloskey, ace recruiter of prominent sometimes rich) conservatives to Catholicism?” asked blogger Rod Dreher in a tweet. “He was everywhere — in '90s, he tried to talk me into joining Opus Dei — then suddenly, nowhere. Now we know. It never ends.”

Whatever happened to Fr C. John McCloskey, ace recruiter of prominent (sometimes rich) conservatives to Catholicism? He was everywhere — in '90s, he tried to talk me into joining Opus Dei — then suddenly, nowhere. Now we know. It never ends: https://t.co/GXXTDC7jjj

Dreher also noted in a blog posting that when McCloskey was asked years ago in a television interview what percentage of the priesthood he thought was gay, he said just three percent to five percent are — the same percentage of homosexuals in the general population.”

“I knew perfectly well that McCloskey knew better than that,” wrote Dreher, “and that he was propagandizing to protect the image of the Church.”

Fr McCloskey was a good priest who befriended, helped and encouraged me when i was very down. He prophesied my future and helped move me forward to the priesthood. When someone stumbles may we have the grace and mercy to remember the good they did not just their weakness.

“This man was a friend and mentor to me,” said Fr. Phillip W. De Vous, a parish priest in Kentucky. “He talked me into going back into seminary when I was working in the think-tank world.   “I’m stunned,” he continued. “Apparently, everyone I’ve ever admired and been inspired by in the Church is deeply compromised and up to no damn good.”

“I knew him very well,” said Fr. De Vous in a separate Twitter statement. “He saved my faith and my vocation. If you knew him you’d be as stunned and breathless at the idea he could ever do something like this. I’ve been associated with OD since seminary and it was nothing but straightforward Catholicism.”

I knew him very well. He saved my Faith and my vocation. If you knew him you’d be as stunned and breathless at the idea he could ever do something like this. I’ve been associated with OD since seminary and it was nothing but straightforward Catholicism.

“Fr. McCloskey also was instrumental in encouraging and preserving my priestly vocation,” said another priest. “He helped keep me in seminary during a very dark time when I was all but ready to hang it up. I don't know what to make of this. Except that God can use very flawed instruments to achieve his ends.”

In a twist added to the story last night, Leon J. Podles, author of the landmark 2008 book,  Sacrilege; Sexual Abuse in the Catholic Church, said when he mentioned to McCloskey that he was working on the book, McCloskey strongly advised him to drop the project.

Father McCloskey now suffers from advanced Alzheimer’s and has returned to his hometown, Washington D.C., to be closer to family.

“He has not had any pastoral assignments for a number of years,” noted Msgr. Bohlin in his statement, “and is no longer able to celebrate Mass, even privately.”