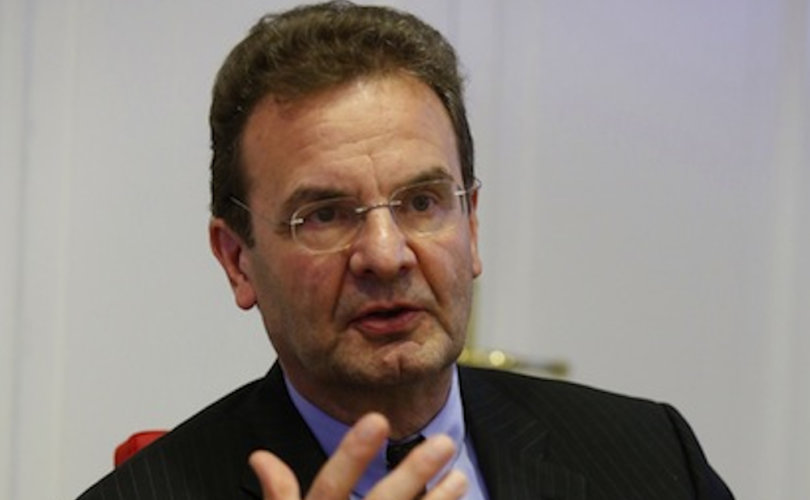 January 18, 2017 (LifeSiteNews) — In a press release yesterday, the Vatican said it “reaffirms its confidence in the five Members” of the Pope Francis appointed commission and “rejects, based on the documentation in its possession, any attempt to discredit these Members of the Group and their work.” The statement comes in the wake of revelations of bias concerning three of the five members of the group set up to investigate the dismissal of one of the high ranking members of the high profile Catholic order for having knowingly permitted distribution of contraception.

The Sovereign Order of Malta has decided not to “cooperate” with the group of inquiry. The Grand Ministry of the Order reiterated its decision because of the “legal irrelevance of this group and of its findings relating to the legal structure of the Order of Malta” on its website on January 10.

The commission was mandated to gather evidence to thoroughly inform the Holy See about the dismissal of the Grand Chancellor of the Order, Albrecht Freiherr von Boeselager. News of the commission set up by the Vatican broke two days before Christmas and warranted an immediate rebuff from the Order.

“The replacement of the former Grand Chancellor is an act of internal governmental administration of the Sovereign Order of Malta and consequently falls solely within its competence,” the statement explained.

LifeSiteNews here provides a detailed look into the matter. Edward Pentin published an in-depth article about the current situation of the Order in the National Catholic Register, which together with information gathered by LifeSiteNews sheds more light on the whole case.

The dismissal of von Boeselager marked the end of a multiple-year investigation into Boselager’s involvement in a condom scandal in Africa and Asia during his charge as Grand Hospitaller of the Order. The investigation was conducted internally and involved the highest government of the Order. It inquired into decisions in regard to the distribution of condoms by the charity, Malteser International, while Boeselager was member of Malteser International’s board.

Minutes of meetings and personal conversations with Boeselager revealed that Boeselager had knowledge of the condom distribution but did not inform his direct superior, Grand Master Fra’ Matthew Festing.

Independent of the internal investigation – undisclosed at that time – the Lepanto Institute launched its own investigation, external to the Order, and discovered hard evidence for Boeselager’s involvement in the distribution of condoms and oral contraceptives in developing countries. Within a one-year span, 2006-2007, UNAIDS reports shows that Malteser International distributed 59,675 condoms. According to a report produced by the Three Disease Fund, Malteser distributed more than 300,000 condoms to sex workers, truck drivers, uniformed personnel, and other male and female workers.

A 2006 World Health Organization report indicates Malteser distributed 2,500 oral contraceptives in Myanmar. LifeSiteNews has learned that Malteser also distributed handbooks to workers with instructions on how to teach the use of contraceptives to those who receive them.

Boeselager justified his actions by arguing that condoms given to sex workers would save their lives and prevent them from contracting AIDS. Boeselager is quoted to have said in a meeting that “We have to give contraceptives to the poor or they will die.”

“They were giving the condoms not only to patients, but also to aid workers in general,” the National Catholic Register quoted an informed source as saying. “The ostensible motivation was to prevent the spread of AIDS, and then, in general, as a program for family planning too — birth spacing and that kind of thing, which you can hardly say had to do with AIDS.”

A second problematic situation concerns private meetings between Boeselager and the Secretary of State, Cardinal Pietro Parolin, whereupon Boselager did not inform Festing about the content of the communications, as LifeSiteNews has learned. As a Sovereign entity, the Order’s dealings with the Vatican should all pass through the Patronus of the Order, Cardinal Raymond Burke. As “Patron,” Burke is to promote relations between the Holy See and the Knights and to keep the Holy Father informed about the Order.

At the end of 2014, the Grand Master became aware of the issue of condom distribution, as Pentin reports, and in May 2015 Festing appointed a three-person commission to find out what happened. The commission produced its findings in January 2016. Boeselager was called to discuss this issue multiple times between 2014 and December 2016.

“There have been numerous occasions between the end of 2014 and December 2016, in which the Grand Master and Albrecht Boeselager had discussed the situation,” Eugenio Ajroldi Di Robbiate, communications director for the Knights of Malta, told LifeSiteNews on January 11.

The transgressions against the moral teaching of the Church in the form of the distribution of contraceptives as well as Boeselager’s undermining of Festing’s authority led the Grand Master to ask Boeselager to step down from his post as Grand Chancellor and therefore as a member of the Sovereign Council – the highest government of the Order worldwide. Boeselager’s appointment would have come to natural expiration in 2019.

The Grand Master’s request to resign “under the promise of obedience” at a December 6 meeting of the Sovereign Council was not merely a material order but a spiritual requirement that touched on the very nature of Boeselager’s membership. When Boeselager took the promise of obedience to become a “Knight of Obedience,” he bound himself to religious obedience to the Superior of the Order. By refusing to step down, he broke that promise and went against the Order’s constitutions that state that obedience in the Order involves the obligation to execute any instruction as lawfully given by the superior, independent of the motivation of that instruction. This is the reason disciplinary measures were taken against him.

In a Dec. 23 statement, Boeselager protested his dismissal on the grounds that there was no “established procedure” for his removal. He called the Grand Master’s decision “reminiscent of an authoritarian regime.”

In the same statement, Boeselager claimed that the Grand Master used a contrived Vatican request as an excuse to remove him from office. Boeselager in his statement claimed that the Vatican had written to the Grand Master confirming that such a wish was never raised. He defended the “independent commission” that the Vatican appointed to make expeditious inquiries on the accusations. Boeselager also called the procedure of the announcement of his successor Fra’ John Critien “of questionable validity.”

Boeselager failed to mention that he had both discussed this matter with the Grand Master and been asked to step down in the past, as LifeSiteNews has learned. The “wish of the Vatican” he spoke of alludes to a letter from Pope Francis to Cardinal Burke in which Pope Francis expressed deep disturbance by what the Cardinal told him about the contraceptive distribution, as Pentin notes as well.

The letter did not specifically mention Boeselager’s dismissal but called for action against immoral practices and expressed the Pope’s wish to clean out Freemasonry from the Order. Cardinal Burke insisted that he would never have told Boeselager that the Pope specifically asked for his dismissal, rather inside sources “are at pains to point out that the Knights’ leadership could not see how the matter could be otherwise rectified, when great scandal was involved and no one was taking responsibility for it,” Pentin writes. Burke himself investigated the matter together with legal aid in the recent past.

The involvement of the Vatican can be traced back to Boeselager continually informing Cardinal Parolin of the Order’s internal affairs. Pentin writes: “because he viewed the situation as an emergency, according to sources, Cardinal Parolin did not verify what was communicated to Boeselager by Cardinal Burke before writing a Dec. 12 letter to Fra’ Festing on behalf of the Holy Father. In it, he stressed that the Pope’s ‘only instructions’ were those given to Cardinal Burke in his missive of Dec. 1.”

In a letter written by Parolin, he stated that because of the “unhappy events” he feels “compelled” to inform “on behalf of – and by specific request of – the Holy Father, Pope Francis, that the only instructions given by him are those that were communicated in writing on 1st December last, in the letter addressed to Cardinal Raymond Leo Burke, Patronus of the Order.” Parolin stated that “His Holiness asked that dialogue be the approach used to address and resolve potential problems,” and added that Francis “never mentioned, conversely, expelling anyone.” Parolin then repeated that “dialogue” [emphasis his own] should be initiated to find a resolution to the “unpleasant and perilous turn of events.”

The “independent” commission – as Boeselager called it – is composed of five members: Archbishop Silvano Tomasi, Fr. Gianfranco Ghirlanda SJ, Jacques de Liedekerke, Marc Odendall, and Marwan Sehnaoui. All of the members chosen by the Holy See except Fr. Ghirlanda are members of the Order and in allegiance with Boeselager.

As an informed source told LifeSiteNews, they are “under Boeselager’s payroll,” referring to Liedekerke, Odendall and Sehnaoui. It has come to the attention of LifeSiteNews that Liedekerke also is connected to Freemasonry.

Pentin wrote in his article that “the Register has learned that Odendall, Sehnaoui, and Archbishop Tomasi have been involved with Boeselager regarding a very large bequest to the Order, made several years ago by a benefactor resident in France, worth at least 120 million Swiss Francs ($118 million). Cardinal Parolin is understood to have been aware of the bequest since at least March 2014.

The Order’s refusal to cooperate with the commission was repeated in their January 10 statement. “This is to protect its sovereignty against initiatives which claim to be directed at objectively questioning or even limiting said Sovereignty.”

“Article 4 paragraph 6 of the Constitutional Charter is clear when it states that ‘the religious nature of the Order does not prejudice the exercise of sovereign prerogatives pertaining to the Order insofar as it is recognized by States as a subject of international law’ and Article 4 paragraph 5 reiterates that ‘the Order has diplomatic representation to the Holy See, according to the norms of international law,’” the statement reads. “Failure to cooperate with the aforementioned Group has therefore strictly legal grounds, thus it is not and cannot in any way be considered as a lack of respect towards the Group, nor towards His Eminence Secretary of State.”

Pentin reports that on Dec. 22 the Grand Master and Cardinal Burke received a letter from the Vatican communicating that a commission had been established, that the Pope’s instructions in his letter of Dec. 1 were to be halted, and that nothing more was to be done until the newly formed group completed its work.

“The Vatican also informed the media the same day, although not in the daily Vatican news bolletino, but in an email, that the five-member body was aimed at quickly obtaining information about the dispute.”

The situation still is unresolved and both parties, the Holy See and the Supreme Government of the Order, are working toward a solution. The Italian newspaper Il Messaggero published comments by Cardinal Parolin on Dec. 31, in which he said the commission will “gather information, and then we will see.”