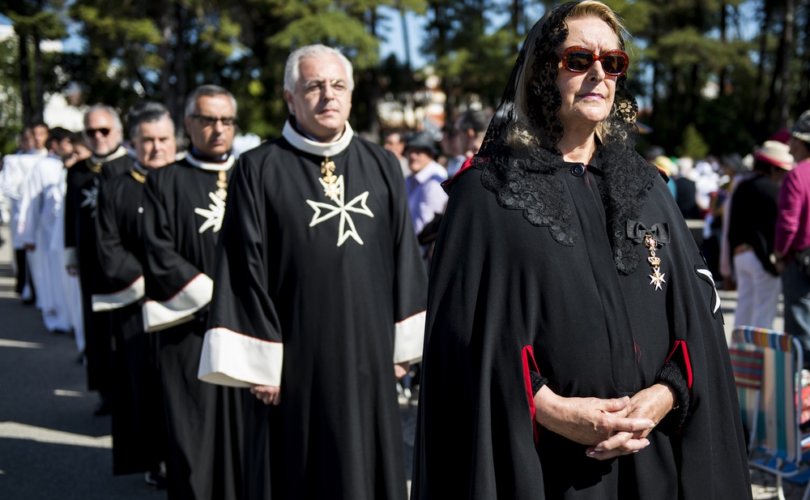 Knights of the Order of Malta at the Sanctuary of Fatima during the 2014 celebrations of the apparition of the Virgin Mary in Fatima, Portugalshutterstock.com

ROME, June 11, 2019 (LifeSiteNews) — The Sovereign Military Order of Malta has banned liturgical ceremonies in the Extraordinary Form of the Roman Rite of the Mass.

According to an official letter from Fra Giacomo dalla Torre del Tempio di Sanguinetto, the leader of the Catholic lay philanthropic group, “Henceforth, all the liturgical ceremonies within our Order must be performed according to the ordinary rite of the Church (rite of St. Paul VI) and not the extraordinary rite (Tridentine rite).”

He is the Prince and Grand Master of the Order, the descendant of the medieval Order of Saint John or Knights Hospitaller founded in Jerusalem in 1099. The 12,500 members of the order sponsor hospitals as well as provide services to refugees and disaster victims, employing some 42,000 people.

A spokeswoman for the @orderofmalta in Rome has confirmed to me this morning that this June 10 letter of the Grand Master banning all liturgical ceremonies in the Extraordinary Form within the Order is genuine. pic.twitter.com/J2aUrCUiWY

The Sovereign Military Hospitaller Order of Saint John of Jerusalem, of Rhodes and of Malta, as it calls itself, maintains diplomatic relations with more than 100 countries and the European Union. Cardinal Raymond Burke is patron of the Order, offering spiritual guidance to its members while interceding for the Order to the Vatican.

In Fra Dalla Torre’s June 10 letter, he does not betray his reasoning for barring the Latin Mass. Citing Pope Benedict XVI’s Summorum Pontificium, he wrote, “This decision applies to all the official liturgical celebrations such as investitures, Masses during our pilgrimages, memorial masses, as well as the feasts and solemnities of the Order.”

He also called on the Order’s superiors to ensure that his wishes should be “immediately put into practice.” The letter claims that Summorum Pontificum allows priests permission to utilize the Traditional Latin Mass and that likewise the Major Superior of a religious institute may decide on its use within their community.

“As you all know, Benedict XVI's Motu Proprio Summorum Pontificium, albeit leaving every priest the freedom to celebrate privately in the extraordinary form, nevertheless states that inside a religious institute the matter is to be decided by the Major Superior according to the norm of law and their particulate statutes (Summorum Pontificium, art. 3),” he wrote. “I have thus decided, as supreme guarantor of the cohesion and communion or the Order of St. John of Jerusalem of which Providence made me Grand Master, that henceforth all the liturgical ceremonies within our Order must be performed according to the ordinary rite of the Church (rite of St. Paul VI) and not the extraordinary rite (Tridentine rite).”

Catholic News Service reported that the Order’s press officer, Marianna Balfour, said Fra Dalla Torre’s letter was a reaffirmation of certain guidelines within the Order and that it contained “no novelty.” It was intended to foster “unity” in the Order, said Balfour.

The members of the order have the right to participate in any celebration preferred, according to Balfour, who said the letter refers only to celebrations within the Order and to encourage “uniformity and cohesion.”

Fra Dalla Torre has been leading a reform of the Order since his election to the lifelong post in 2018. This was preceded by the resignation of the former leader of the Order, Fra' Matthew Festing, who had previously removed the chancellor of the Order, Albrecht Freiherr von Boeselager, and faced an investigation. Von Boeselager was later reinstated.

In January, Fra' Dalla Torre told diplomats in Rome that reforming the Order “has led to the definition of some key themes for the order's life, and in particular, its religious members.” Reform of the Order, he said, includes a focus on “the importance of a spiritual life, which for a Catholic order must remain a guiding inspiration.”

Some of the terminology used in the letter, such as the misspelling of “Summorum Pontificum” and a reference to the “Rite of St. Paul VI” caused some comments that doubted its authenticity. However, the Order later verified it.

Pope Benedict XVI’s publication of Summorum Pontificium was greeted with approval in 2007 by traditionalists. However, Pope Francis has suggested his annoyance with traditionalists, especially young people who are devoted to the traditional rite. In an interview with Fr. Antonio Spadaro of La Civilta Cattolica that accompanied a compilation of homilies he delivered as bishop in Argentina, Francis said the reformed version of the Mass that came after the Second Vatican Council is here to stay. Acknowledging that Benedict XVI was “magnanimous” toward traditionalists, Francis added, “But it is an exception.”

Responding to a question about why young people, who have no experience of the Latin Mass as children, are attached to it, the Pope said, “I always try to understand what’s behind the people who are too young to have lived the pre-conciliar liturgy but who want it. Sometimes I’ve found myself in front of people who are too strict, who have a rigid attitude. And I wonder: How come such a rigidity? Dig, dig, this rigidity always hides something: insecurity, sometimes even more. … Rigidity is defensive. True love is not rigid.”