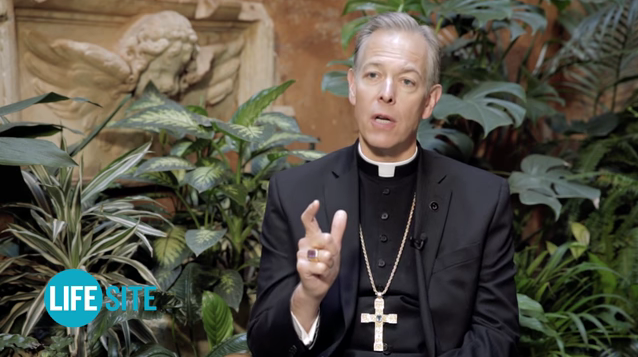 PORTLAND, Oregon, July 10, 2017 (LifeSiteNews) — An American archbishop has released guidelines upholding the Church's constant teaching that Catholics in “serious sin” – including active homosexuals and those in adulterous unions – must repent before receiving Communion.

The new guidelines from Archbishop Alexander Sample of Portland, Oregon are intended to implement Pope Francis’s Exhortation Amoris Laetitia in a way that he said is “compatible with Church teaching.”

The guidelines state that those in “serious sin,” including divorced and civilly-remarried persons living unchastely as well as persons in an active same-sex relationship, must “sacramentally confess all serious sins with a firm purpose to change, before receiving the Holy Eucharist.”

Sample wrote in his May 2017 guidelines that Amoris Laetitia “calls for a sensitive accompaniment of those with an imperfect grasp of Christian teaching on marriage and family life, who may not be living in accord with Catholic belief, and yet desire to be more fully integrated into Church life, including the Sacraments of Penance and the Holy Eucharist.”

But true accompaniment, he said, can only take place within the “tradition of the Church’s teaching and life.”

“In fact, pastors must always convey Catholic teaching faithfully to all persons – including the divorced and remarried – both in the confessional as well as publicly. They should do this with great confidence in the power of God’s grace, knowing that, when spoken with love, the truth heals, builds up, and sets free (cf. Jn 8:32),” the guidelines state.

The Archbishop said that there have been “misuses” of the Pope’s Exhortation “in support of positions that are not compatible with Church teaching.”

Among these is the notion that an individual’s conscience has, after Amoris Laetitia, become the final judge in moral matters. Such a position is taken by Chicago Cardinal Blase Cupich, who has argued that the civilly-divorced-and-remarried as well as active homosexuals should be able to receive Communion if they came to the decision “in good conscience.”

But, following what the Church has always taught, the Archbishop’s guidelines state: “Catholic teaching makes clear that the subjective conscience of the individual can never be set against the objective moral truth, as if conscience and truth were two competing principles for moral decision-making.”

As St. John Paul II wrote, such a view would ‘pose a challenge to the very identity of the moral conscience in relation to human freedom and God's law. . . . Conscience is not an independent and exclusive capacity to decide what is good and what is evil’ (Veritatis Splendor 56, 60). Rather, ‘conscience is the application of the law to a particular case” (Veritatis Splendor 59). Conscience stands under the objective moral law and should be formed by it, so that “[t]he truth about moral good, as that truth is declared in the law of reason, is practically and concretely recognized by the judgment of conscience’ (Veritatis Splendor 61).

Archbishop Sample said that in view of Catholic teaching on conscience, “priests must help the divorced and civilly remarried to form their consciences according to the truth.”

“This is a true work of mercy,” he said.

Divorced and civilly-remarried Catholics wishing to return to a sacramental life within the Church must either “‘regularize’ their marital status in the Church” (receive a declaration of nullity for first union and then marry within the Church) or, if this cannot be done, “refrain from sexual intimacy” by living “as brother and sister.”

“Undertaking to live as brother and sister is necessary for the divorced and civilly-remarried to receive reconciliation in the Sacrament of Penance, which could then open the way to reception of the Holy Eucharist. Such individuals are encouraged to approach the Sacrament of Penance regularly, having recourse to God’s great mercy in that sacrament if they fail in chastity,” the guidelines state.

[W]here pastors give Holy Communion to divorced and remarried persons trying to live chastely, they should do so in a manner that will avoid giving scandal or implying that Christ’s teaching can be set aside. This is left to the prudential judgement of the pastor involved. In other contexts care must also be taken to avoid the unintended appearance of an endorsement of divorce and civil remarriage; thus, divorced and civilly remarried persons would not hold positions of responsibility in a parish (e.g. on a parish council), nor would they carry out liturgical ministries or functions (e.g., lector, extraordinary minister of Holy Communion).

The guidelines specifically address what pastors must do when a same-sex couple presents themselves openly in a parish.

The Church welcomes all men and women who honestly seek to encounter the Lord, whatever their circumstances. But two persons in an active, public same-sex relationship, no matter how sincere, offer a serious counter-witness to Catholic belief, that can only produce moral confusion in the community. Such a relationship cannot be accepted into the life of the parish without undermining the faith of the community, most notably the children.

“Those living openly same-sex lifestyles would not hold positions of responsibility in a parish, nor would they carry out any liturgical ministry or function until they are reconciled with the Church and are living in accord with the Church’s moral teaching,” they add.

Sample said that while the guidelines may be a “hard teaching for some” they “correspond[] with our belief about the nature of the Holy Eucharist, marriage and the Church.”

The Archbishop said that guidelines are to be “considered normative for the Archdiocese of Portland, and they are to be carefully and faithfully observed.”

“The sanctity of marriage and God’s plan for a joy filled marriage require all those engaged in pastoral ministry to exercise the tremendous responsibility entrusted to them with complete fidelity to Catholic teaching coupled with mercy and compassion,” he said.