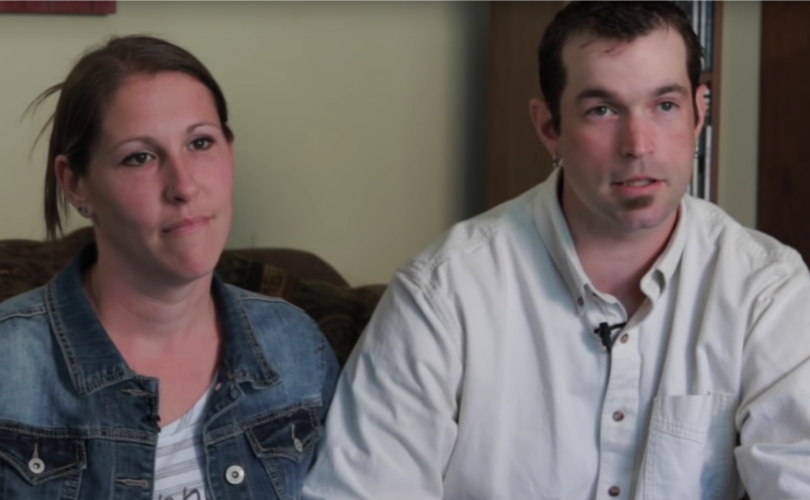 April 26, 2016 (DailySignal) — The Oregon bakers who were ordered to pay $135,000 for refusing to bake a cake for a same-sex wedding filed a brief with the Oregon Court of Appeals on Monday, arguing the ruling against them was biased and violates both the Oregon and U.S. constitutions.

“In America, you’re innocent until proven guilty,” said Kelly Shackelford, president and CEO of First Liberty Institute, the group representing Aaron and Melissa Klein in their legal fight. “Commissioner Brad Avakian decided the Kleins were guilty before he even heard their case. This is an egregious violation of the Kleins’ rights to due process. We hope the Oregon Court of Appeals will remedy this by dismissing the government’s case against the Kleins.”

Brad Avakian, commissioner of the Oregon Bureau of Labor and Industries, was responsible for issuing the final ruling on the case. On July 2, 2015, he ruled that in declining to bake a cake for a same-sex wedding due to their religious beliefs, the Kleins violated an Oregon law that prohibits discrimination in places of public accommodation against people based on their sexual orientation.

Avakian ordered the Kleins to pay $135,000 in mental, physical, and emotional damages to the couple whom they denied service.

Rachel and Laurel Bowman-Cryer (who have since married) filed a complaint against Sweet Cakes by Melissa in Gresham, Ore., in February 2013, a month after the Kleins refused to make a cake for the same-sex couple’s wedding.

The Bureau of Labor and Industries opened its investigation into Sweet Cakes by Melissa in August 2013, six months after the agency received the initial complaint from Rachel and Laurel Bowman-Cryer alleging the bakery owners discriminated against them.

Yet, in the appeal brief filed Monday, lawyers for the Kleins argued that Avakian had publicly declared the Kleins guilty before even waiting for an investigation to take place, citing a Feb. 5, 2013, Facebook post.

In that post, Avakian writes, “Everyone has a right to their religious beliefs, but that doesn’t mean they can disobey laws that are already in place. Having one set of rules for everybody ensures that people are treated fairly as they go about their daily lives.”

In August 2013, after the Oregon Bureau of Labor and Industries announced it was opening an investigation to determine whether the Kleins had discriminated against the same-sex couple, Avakian also commented about the case, suggesting he had already decided that the Kleins were guilty. “Everybody is entitled to their own beliefs,” he said in an interview with The Oregonian, “but that doesn’t mean that folks have the right to discriminate.”

“The goal is never to shut down a business. The goal is to rehabilitate,” Avakian added.

Ken Klukowski, an attorney at First Liberty, told The Daily Signal that “it’s clear” Avakian demonstrated bias “that rises to the level of violating due process.”

In addition to ruling the Kleins must pay $135,000, Avakian also ordered the former bakery owners to “cease and desist” from speaking publicly about not wanting to bake cakes for same-sex weddings based on their Christian beliefs.

“The Commissioner of the Bureau of Labor and Industries hereby orders [Aaron and Melissa Klein] to cease and desist from publishing, circulating, issuing or displaying, or causing to be published … any communication … to the effect that any of the accommodations … will be refused, withheld from or denied to, or that any discrimination be made against, any person on account of their sexual orientation,” Avakian wrote in the final order.

The justification for this part of his final order originates from an interview Aaron and Melissa Klein participated in with Family Research Council’s Tony Perkins in 2014. During the interview, Aaron said that they, “don’t do same-sex weddings,” and “This fight is not over. We will continue to stand strong.”

Avakian wrote those statements demonstrate a “prospective intent to discriminate.”

“This gag order that they’re under right now, where they have been ordered by the government that they can’t even discuss these things with the media,” Klukowski said, “is shockingly overbroad.”

“There are aspects of their beliefs and of this case, including aspects of their religious beliefs about marriage, that if they were to share these things publicly, that the government could punish them, saying that it amounts to the equivalent of advertising their intention to continue engaging in illegal discrimination,” Klukowski said.

“That censors so much protected speech.”

The punishment for violating the order is “notoriously unspecific,” Klukowski added. Because of that, lawyers for the Kleins are treading carefully on what they allow their clients to do and say in public.

“This is a couple with young children and where the law does not specify what the most severe penalty could be where as far as we know, the sky could be the limit, that’s where we owe it to our clients to err on the side of caution and try to shield them from additional exposure that could have consequences of unspecified severity,” he said.

In reviewing the appeal, the Oregon Appeal Court will determine whether or not the Oregon Bureau of Labor and Industries violated the Kleins’ constitutional rights to religious freedom, free speech, and due process.

The Kleins maintain that they did not decline the same-sex couple due to their sexual orientation—stating in the brief that they have served one of the women who filed the complaint against them in the past. Instead, they maintain they were only declining to participate in an event that they disagree with because of their Christian beliefs about marriage.

Avakian ruled there is “no distinction” between the two situations.

Klukowski said he expects oral arguments to take place later this year. If the Oregon Court of Appeals rules against the Kleins, the next step would be appealing to the Oregon Supreme Court.