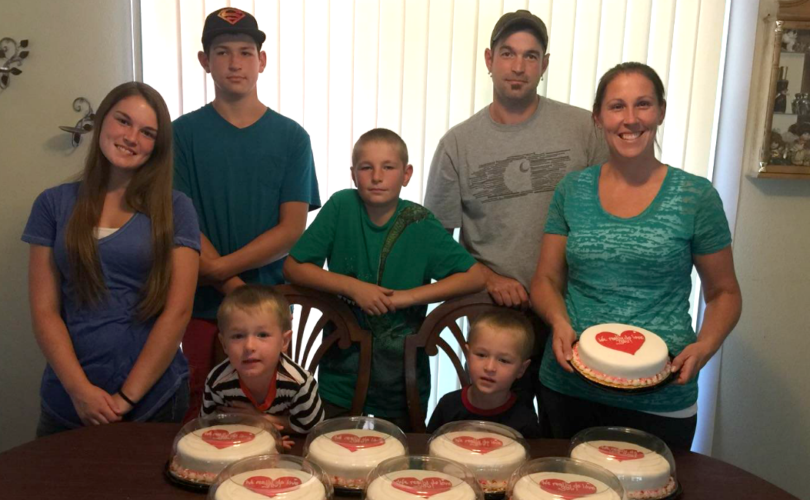 Courtesy of the Klein family / The Daily Signal

PORTLAND, OR, August 19, 2015 – (LifeSiteNews) – The Oregon Christian family that was fined $135,000 earlier this year for refusing to bake a cake for a same-sex “wedding” is turning the other cheek and extending an olive branch to some of their attackers.

Sweet Cakes by Melissa’s Aaron and Melissa Klein are sending a home-baked message to LGBT activist groups, and that message is, “We really do love you.”

The Klein’s designed special cakes to communicate the message and spent several days with their five children baking them for an initial group of 10 West Coast pro-homosexual groups.

“They might just throw it in the garbage,” Melissa Klein said. “They can do that, it’s OK. My hope is that they will see the feeling behind it, and just maybe understand.”

The Klein’s had not planned to tell the media about the idea of sending the cakes. However, The Daily Signal learned about the project while in touch with them on another matter and subsequently reported on it.

“We’re doing this to show that we don’t harbor hard feelings toward the narrative that’s been put out about us,” Aaron Klein said. “We don’t want to see these people hurting.”

The Klein’s were fined $135,000 earlier this year after being threatened with prosecution by the State of Oregon for declining to bake the cake in 2013 because homosexual “marriage” conflicts with their Christian beliefs.

The lesbian couple who wanted the Klein’s to bake the cake complained to the State of Oregon claiming the incident left them feeling “mentally raped,” and listed some 88 separate resulting symptoms of mental anguish they reportedly suffered because of the denial. These included “surprise,” being “stunned,” experiencing a “dislike of going to work,” and that one or both of them had resumed smoking.

Oregon officials accused the Kleins of violating the Oregon Equality Act of 2007, which permits an unelected judge to levy a maximum of $75,000 per petitioner. The State had wanted the $150,000 maximum.

The Proposed Order ended up assessing $135,000 against the Kleins, splitting the award in $60,000 and $75,000 groupings of damages individually to the two women for their suffering.

The State officials said they pursued the case in order to modify the Kleins' behavior, and that “the goal was to rehabilitate.”

The Kleins have plans to appeal the decision.

The family feels that simply because their Christian faith precludes them supporting homosexual “marriage,” it doesn’t mean they don’t still love individuals who choose to live that lifestyle.

“I’m not asking anybody out there to change their beliefs and believe the way I do,” Melissa Klein said. “I’m just saying they want to live their life freely and I also do, too.”

The Portland-area family eventually closed their business after being targeted by a negative social media campaign.

The Kleins had first moved their cake business to their home, but pro-homosexual vitriol followed them there, with their company van broken into and vandalized, and the slur “bigot” written on the side.

The Kleins have been forced to find other means of income, and taken a substantial cut in earnings in the process.

A GoFundMe page was started to ease the hardship brought on by the fine and loss of business, but GoFundMe was later convinced to shut the Kleins' page down.

Supporters of marriage and religious liberty have rallied behind the family, and eventually more than $300,000 was raised through ContinueToGive.com for their legal defense.

The inside of the cakes the Kleins have designed and baked for the homosexual groups are colored red, white and blue to signify freedom, because, Melissa Klein stated, “everybody should be free to live as we want to live.”

She decorated the outside of the cakes with fondant icing and a red heart, a gesture of “being kind and loving.” In the middle of the heart is where the Kleins’ message is placed, stating, “We really do love you.”

The Kleins say they will send baked goods to other LGBTQ groups across the U.S. in the near future.

The “We really do love you” cakes are in follow-up to the effort the Kleins made to reach out during a deposition to the lesbian couple that filed the complaint about them, telling them their stance in support of marriage was not out of hatred for the women.

“This is a small thing that I can do,” said Melissa Klein. “I can bake them something, take my time and put my energy into expressing how I feel.”

The Kleins remain realistic about what may come from their sending homemade cakes to LGBTQ groups, but they think it is worth the effort.

“That’s the whole narrative that they’ve put forth this whole time, that I’m this big hateful guy,” said Aaron Klein. “I don’t get where that comes from because I’ve never been that guy.”