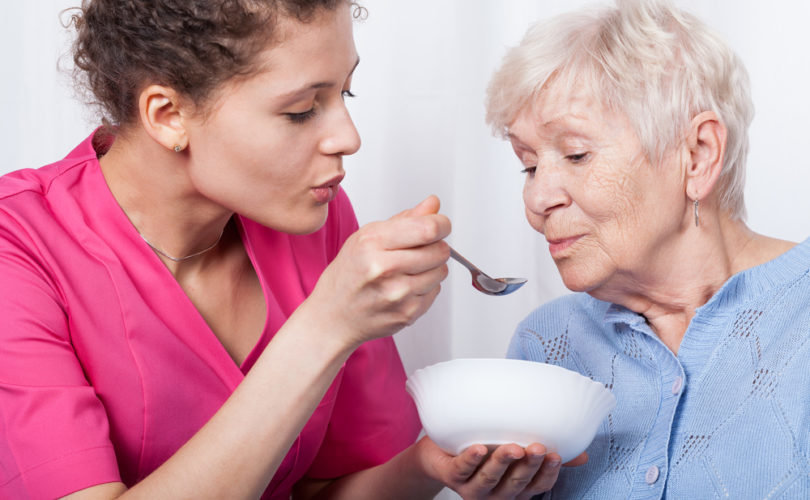 SALEM, Oregon, February 6, 2017 (LifeSiteNews) – The Oregon Senate is considering a bill that would allow dementia and mentally ill patients to be starved and dehydrated against their wishes.

Competent adults may already voluntarily stop eating and drinking, but such mistreatment may now be extended to “incompetent adults with dementia or mental illness who have not indicated that they want to starve to death,” warns Oregon Right to Life.

“In all my years at working at Oregon Right to Life, I have never seen such a devious bill,” Gayle Atteberry, the group's executive director, told LifeSiteNews via email. “It has been cleverly and craftily written so as to hide its true intent. The lay person cannot really understand the bill without a lawyer to help explain it.”

“The bill takes away all of the safeguards currently in Oregon statute that protect Alzheimer's, dementia and mentally ill patients who are conscious and able to eat and drink and who are not at the end-of-life stage, from being starved and dehydrated to death,” Atteberry explained.

Senate Bill 494 came about because of the case involving Alzheimer's patient Nora Harris. She had filled out an advance medical directive saying she did not want to be fed intravenously. As her illness progressed, she needed to be spoon-fed. But Harris was still expressing a desire to eat; she was able to use her hands, but not utensils, to feed herself.

Her husband filed a lawsuit to get her nursing home to stop feeding her.

The nursing home, Fern Gardens, said it would not force Harris to eat but that it only wanted to continue providing her the option of basic food and water. Mr. Harris lost; the Harris family maintains that their mother would want to be starved and dehydrated rather than live in such a state.

At the heart of this court battle was the definition of “tube-feeding” and whether being spoon-fed counts as “tube feeding,” something Harris said in her advance directive she didn't want.

“SB 494 eliminates entirely the definitions of 'life-support' and 'tube feeding' from statute, leaving the surrogate and courts to define those terms as they wish,” said Atteberry. It “would delete key definitions in law that make it very clear that patients can fill out their advance directive and be certain that their directive will be followed just as they intended.”

SB 494 would allow a court to determine that assistance eating or drinking counts as “tube feeding” or “life support.” Therefore, it could be denied to a mentally incapacitated patient who had previously filled out a directive requesting denial of both of those things – even if the patient wants to keep eating and needs help doing so.

Other words from which SB 494 removes legal definitions are “heath care instruction” and “dementia.”

It “transfers power from who can make decisions about end-of-life care from the patient to the surrogate and the courts,” thus undermining patient rights, Atteberry said.

The bill adds “to the extent appropriate” in the space on the advance directive form that says “my healthcare representative must follow my instructions.”

It erases the word “desires” throughout the statute, replacing it with “preferences.”

The bill would also create an unelected committee that could make changes to advance directive regulations.

“The governor-appointed committee SB 494 sets up is entirely independent and can do what is wishes with new advance directives they write,” Atteberry warned.

Oregon's laws related to end-of-life care are some of the most liberal in the country. It was the first state to legalize assisted suicide in 1997. The number of lethal prescriptions doctors have written terminally ill patients in Oregon has skyrocketed in recent years.

In 2014, at least one person who died by assisted suicide obtained the lethal dose in 2012 – 439 days before death – even though the law says the patient must be within six months of death.