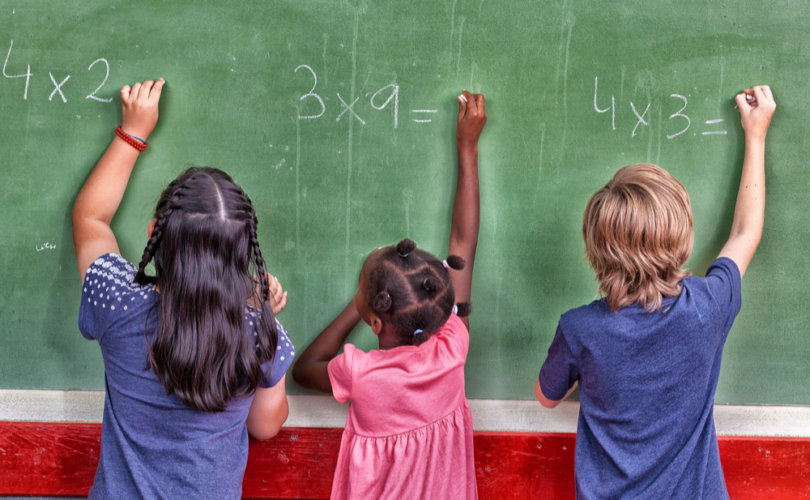 SALEM, Oregon, February 17, 2021 (LifeSiteNews) — The Oregon Department of Education suggested teachers take a course provided by a group that also asks educators “to reflect on their own biases” towards white supremacy and provides them with a framework “for deconstructing racism in mathematics.”

The department issued a bulletin on “Black History Month” this February, in which it encouraged teachers to take a course by “A Pathway to Equitable Math Instruction” that, according to the course description, offers “guidance and resources for educators to use now as they plan their curriculum, while also offering opportunities for ongoing self-reflection as they seek to develop an anti-racist math practice.”

The course, in turn, recommends a toolkit of five “strides” to help teachers “navigate the individual and collective journey from equity to anti-racism.”

The first “stride” is titled “Dismantling Racism in Mathematics Instruction” and teaches participants that “[w]hite supremacy culture infiltrates math classrooms in everyday teacher actions,” which can be redressed by first “visibilizing [sic] the toxic characteristics of white supremacy culture with respect to math.”

The “everyday teacher actions” to which the guide refers include focusing students on attaining “the right answer.” Such a practice perpetuates the (apparently false) concept that “there are always right and wrong answers” in mathematics — a key example, according to the authors of the “Equitable Math” paper, of white supremacy.

The “beliefs that underlie these actions,” they say, “perpetuate educational harm on Black, Latinx, and multilingual students, denying them full access to the world of mathematics.” “Latinx” is the progressive Left’s “gender neutral” term for Latin Americans.

In addition to “perpetuating objectivity” by pursuing the right answer, requiring students to demonstrate their work is also considered a signal of racial bias.

According to the guide, which was created with the “generous financial support” of the Bill and Melinda Gates Foundation, teachers who ask to see a student’s work are using their product on paper as “a crutch” to understand what a student is thinking. Thus, “requiring students to show their work reinforces worship of the written word as well as paternalism.” Worship of the written word refers to the theory that relying on writing skills is a key element of white supremacy culture in organizations.

To combat it, the guide suggests educators ask students to “create TikTok videos, silent films, or cartoons about mathematical concepts or procedures,” instead of showing their written calculations.

When it comes to grading, there are many racist pitfalls to avoid, according to the instructional guide.

Since grades are a way of “reinforcing perfectionism,” another tenet of white supremacy, according to the manual, teachers are asked to replace the letter-grade system with “assessments that highlight student knowledge rather than deficit knowledge.” This methodology is in line with “equity grading,” a practice that focuses on the equal outcome of student assessments, calling any difference in outcome (like one student outperforming another) an example of “unconscious and implicit bias,” and therefore racist.

Additionally, tracking a student’s success in math class is considered integral to “white supremacy culture.” The guide explains that this is because teachers often track a student’s progress on the foundation that they, as the teacher, know better than the student. This, allegedly, reinforces “paternalism and powerhoarding,” with the group even criticizing a teacher who institutes “groupings” or “seating charts” as a way of tracking students.

Meanwhile in California, the problem of Critical Race Theory (CRT) in schools is also spreading. “Critical race theory is a theoretical framework, rooted in Marxism, that posits individuals as oppressed or oppressor based on their skin color,” according to Eleanor Krasne of The Heritage Foundation.

Investigative filmmaker Christopher F. Rufo recently exposed a school in Cupertino, California, which required third-grade students to undergo a lesson in “social identities,” designed to indoctrinate them with CRT.

Rufo noted that the purpose of the exercise was to teach the children that they live in a “‘dominant culture’ of ‘white, middle class, cisgender, educated, able-bodied, Christian, English speaker[s],’ who, according to the lesson, ‘created and maintained’ this culture in order ‘to hold power and stay in power.’”

The group of 8-year-olds were even asked to evaluate their “sexual identity” after being shown a series of slides that instructed them on the intersectional hierarchy of things like “transgenderism and non-binary sexuality.”

In Illinois, too, the State Board of Education recently approved a new rule called “Culturally Responsive Teaching and Leading Standards” which, if ratified, will force teachers in Illinois to “embrace and encourage progressive viewpoints and perspectives,” including “systemic racism.”

The new rule will require teachers to “assess how their biases … affect … how they access tools to mitigate their own behavior (racism, sexism, homophobia, unearned privilege, Eurocentrism, etc.).” They must also affirm “that there are systems in our society that create and reinforce inequities, thereby creating oppressive conditions.”

Failure on the part of teachers to implement the new ruling will open them up to losing their license to teach in the state.

1
The simple reason why you should stop using Gmail
2
Tucker Carlson: Biden admin ‘may have blown up’ gas pipelines in Baltic Sea
3
UFO and alien deception: a diabolical preparation for the Antichrist
4
FBI raids home of Catholic pro-life speaker, author with guns drawn as his terrified kids watch
5
Mark Houck ordered to surrender firearms, passport as conditions of release after FBI arrest
Subscribe to Daily Headlines »