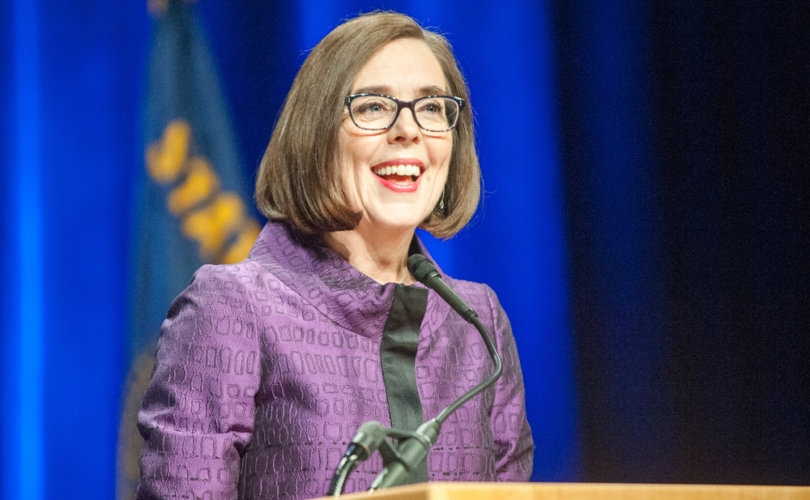 OREGON, January 24, 2019 (LifeSiteNews) – News from Oregon that Governor Kate Brown is on board with a bill which would establish “universal” invasive home visits by state employees to all households with newborns is causing shockwaves throughout the nation.

While the proposed legislation, known as Senate Bill 526, remains in a nascent form with very few published details, it has nonetheless generated great excitement among progressive statists while sending chills down the spines of parents and families who fear increased government interference in their private lives.

The controversial bill directs the Oregon Health Authority “to study home visiting by licensed health care providers.” It has also been given “emergency” status, meaning that action must be taken before the end of this year.

The “emergency” designation has an oddly ominous tone, stating that the measure is “necessary for the immediate preservation of the public peace, health and safety,” so “an emergency is declared to exist.”

The language of the bill that is available has some concerned that these “universal” visits could be mandatory, even though state authorities are denying it.

“Apparently, the state of Oregon is concerned that some parents are raising their children without the watchful eye of Big Brother monitoring their every move – a big no-no in the view of the progressive left,” continued Bolyard.

“It's frightening to think about what would happen to parents who refuse such visits,” noted Bolyard. She added:

As someone who has been involved in the homeschooling movement for more than 20 years, I have seen many attempts to increase the oversight of children taught at home by requiring home visits by a teacher or social worker. The basic premise behind these attempted power grabs is that parents cannot be trusted with the care of their own children — that an agent of the state is the only one qualified to ensure that children are being properly cared for. Without such surveillance, proponents argue, children are at risk for abuse and neglect, something they believe government agents can prevent, despite volumes of evidence to the contrary. In Oregon, in fact, children in the foster care system are abused at twice the national rate. One wonders how a state that can't handle the children currently in its care could possibly manage to surveil an additional 40,000 children per year, let alone pay for such a program (answer: it can't).

The proposed bill is a continuation of policies straight out of the Obama White House which aggressively sought to nudge Americans toward accepting ever-increasing government involvement in their private lives.

With the introduction of its Julia website, the Obama Administration demonstrated how a person could be wholly government dependent, from birth until death. The site was short-lived as Americans recoiled from its premise, with even CNN calling it the “Wrong vision for America.”

Patrick Allen, Director of the Oregon Health Authority, made it clear in a statement to the Beaverton Valley Times that this is not just about helping parents and children living on the edge, who might need recourse to government aid.

“This isn’t something for people in trouble,” said Allen.

“When the program is complete, every new parent — this includes adoptions — would receive a series of two or three visits by someone like a nurse or other health care practitioner,” noted Allen.

“Can we really trust that medical professionals employed by the government who come into our homes are going to actually benefit our children and families?” asked an essay in Health Impact News.

“Is this proposed bill for universal home visits possibly just another way for the State to collect funds, and to potentially remove children from their homes and place them into the lucrative foster care and adoption system?” the essay also asks.

Tellingly, at the head of the essay is a picture of a doctor standing in front of seated family, titled, “Government Approved Family.”

“If the program becomes reality, all families — regardless of income or area of residence — could see three visits from a nurse. They likely could come when the baby is 3 days old; 2 weeks old; and 2 months old,” said Dr. Alanna Braun of Oregon Health & Science University and member of the Oregon Pediatrics Society in an interview.

The program would also allow nurses to monitor moms for signs of postpartum depression and “check to make sure there's a safe place for the baby to sleep and to be bathed and more,” according to the outlet to which Braun spoke.

At the three-day mark, the visit could focus on such basics as weight loss.

At two weeks, the baby’s weight again could be checked. Babies could get the “heel stick,” the pinprick drawing of blood that checks for metabolic indicators of problems which, at that point, show no outward symptoms.

At two months, nurses and families could discuss the many vaccines that [babies] face.

Health Impact News cautions that “parents today face a very real risk of losing their children to Child Protection Services if they dare to question a doctor’s advice regarding medical procedures, or even wanting to seek a second medical opinion.”

Bolyard said that the home visits aren’t just about the health of the newborns, and that the state’s representative would also be observing and making judgements about the parents.

“Government agents monitoring the homes of law-abiding parents who have not been accused of a crime without a warrant is an unconscionable violation not only of parental rights and individual liberty but also a trampling of the Fourth Amendment and the Due Process Clause of the Constitution,” warned Bolyard in her PJ Media commentary.

“The bottom line is that the statists pushing these policies do not trust us with our own children,” concluded Bolyard. “It's not enough for them to have their hooks in them 180 days a year, feeding them propaganda from the first day of kindergarten through the end of high school. They now want access to them from the day they are born — and they will succeed if parents don't rise up and tell the government nannies to back off.”

As currently conceived, if the plan becomes law, it would be rolled out over the course of four years.

Correction: The original version of this article stated that the home visits would be mandatory, but that is unclear and state officials are denying it.