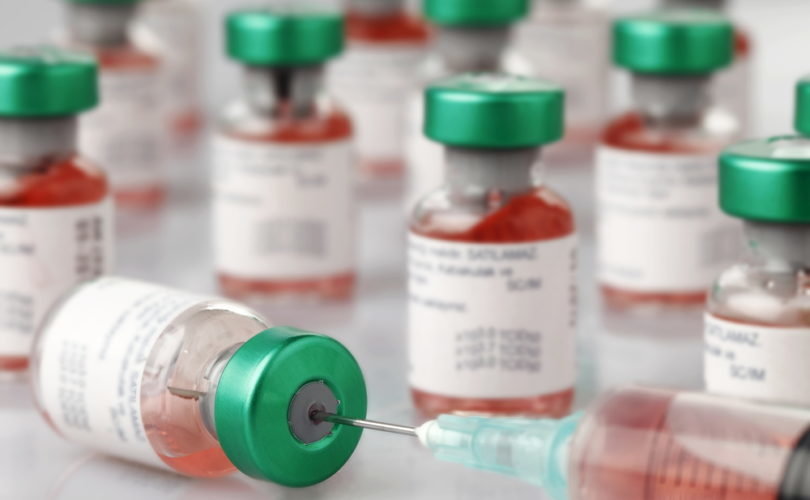 May 7, 2019 (LifeSiteNews) – The Oregon House passed a bill Monday that would eliminate religious and philosophical exemptions to mandatory vaccines, and other U.S. states are poised to do the same.

The Oregon bill passed the House 35-25, the Oregonian reported, mainly along party lines, but with two Republicans voting for it and four Democrats against.

Oregon’s Democrat Gov. Kate Brown has said she would sign the controversial House Bill 3063, which is now headed to the Senate.

The bill would allow parents to opt out of vaccinating their children for documented medical reasons only, the report said. Most Oregon parents who decline to vaccinate their children currently do so with religious and philosophical exemptions.

The law includes daycare and Head Start programs, along with other school-related activities. Children who attend school online or who are home schooled could still remain exempt from mandatory vaccines.

Maine may soon follow the lead of Oregon in prohibiting parents from using religious or personal beliefs to forgo vaccines for their children.

It’s one of at least seven states with legislatures looking at similar laws allowing vaccine exemptions for medical reasons only and as determined by a doctor, according to Reuters.

The others include New York, New Jersey, Oregon, Vermont, Minnesota, and Iowa.

Maine’s Democratic-majority Senate could vote on its vaccine bill as early as Thursday, the Reuters report said. The state’s Democratic-controlled House of Representatives passed it last month in an almost party-line vote, with some Republicans arguing it amounted to inappropriate government intrusion.

The proposed legislation in various states comes amid the largest measles outbreak in the United States in 25 years, with 704 cases recorded so far this year.

The largest U.S. measles outbreak has been in New York City, concentrated in Brooklyn’s Orthodox Jewish communities, according to the U.S. Centers for Disease Control and Prevention and city public health officials.

On April 9, New York City’s Department of Health ordered mandatory vaccinations for all individuals living, working, or living in the largely Jewish district of Brooklyn – backed by threats of heavy fines.

In March, Rockland County, New York banned unvaccinated minors from public places, including churches, in response to the outbreak there.

All 50 U.S. states require that children be vaccinated for varied diseases for them to attend public school, unless they have medical reasons for exemption. Seventeen states currently permit philosophical exemptions for immunizations because of personal, moral or other beliefs.

Only three states already ban all non-medical exemptions, according to the National Conference of State Legislatures; Mississippi, West Virginia and California.

The measles outbreak follows Michigan having had the largest Hepatitis A outbreak in the country in recent years, which has killed at least 27 people since 2016.

The outbreaks and proposed legislation in different states continue to fuel fierce debate over vaccines, with concerns over parents’ rights and the safety, content and origin of some vaccines on one side, and the pro-vaccine contingent insisting that vaccine ingredients do not cause autism or other medical issues.

Pro-vaccine advocates often claim science to be on their side, saying it has debunked the fears held over vaccines, and questions over vaccine safety are often ridiculed as conspiracy theories. Regardless of concerns, pro-vaccine individuals insist parents must vaccinate their children for the greater good.

Concerns persist, however, over potential side effects, accountability for vaccine ingredients, and government overreach.

Pro-life and family groups also condemn the use of vaccines derived from aborted fetal cells, both for moral and health-related reasons. Still, secularists and others continue to dismiss these concerns.