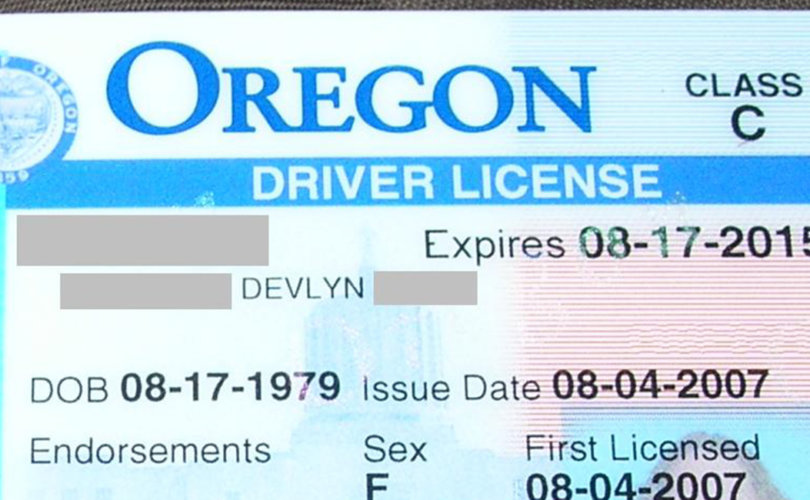 SALEM, Oregon, May 10, 2017 (LifeSiteNews) – Oregon is poised to become the first U.S. state to permit its residents to legally declare themselves without gender, or “nonbinary,” on their driver licenses and other state-issued ID cards.

A public hearing is set for Wednesday evening in Portland for input on a proposal before the Oregon Driver and Motor Vehicle Services Division (DMV) to allow residents to indicate “nonbinary” on state identification documents.

The term “nonbinary” presumes rejection of the two biological genders for which God created human beings.

If passed, Oregon residents could change their IDs and licenses beginning this summer to indicate an “X” under sex rather than just “F” or “M.”

The Oregon DMV’s policy has been to accept court orders as proof of sex change to alter a person’s sex designation on driver licenses and permits, identification cards and DMV records.

However, last June an Oregon circuit court issued an order stating that Jamie Shupe could legally declare his sex as nonbinary. That left the DMV in the position of being unable to issue a card or create a record indicating a “nonbinary” gender.

After his court win last year, Shupe’s lawyer had sent the judge’s order to the DMV, because he wanted a driver’s license that indicated he’d chosen no gender.

But the DMV needed time to examine how to accommodate the request, which it has been doing since. And judges in two other Oregon counties have allowed other residents to declare “nonbinary” status.

“We have a system in much of this nation that is forcing intersex, transgender and nonbinary people to make a choice between male or female, when it doesn't fit them or accurately describe them,” Shupe said of the possible DMV policy change. “In the case of people like me, it's like making a mixed-race kid identify as white, and pretend to be white and have the doctors trying to make them white.”

Shupe, a retired 18-year Army veteran, said last year that his gender identity has never been male, but he felt like he had to own up to his male biology and thus, “I consider myself as a third sex.”

“After serving honorably and having earned the Army achievement medal eight times, the Army commendation medal four times, and the meritorious service medal twice in my service to this nation, I think I deserve the right to properly classify my identity here on the homeland,” he said.

If the rule passes, he said, applicants won’t need a court order to change their licenses. They’ll only have to pay replacement or renewal fees.

More than 50 people attended an earlier public hearing in Eugene on May 2. Twenty-two attendees testified at the meeting, all in favor of the proposed rule change. No one testified in opposition.

Oregon’s prospective move follows the Canadian province of Ontario, which started issuing genderless licenses and health cards early this year. Also, in California lawmakers are considering a bill that would permit drivers to declare themselves as “nonbinary.”

An Oregon LGBT-rights group welcomed the possibility of allowing the state’s residents to officially declare they have no gender on driver’s licenses and ID cards.

“Some people don't identify as male or female,” Basic Rights Oregon Co-Executive Director Amy Herzfeld-Copple said. “We're excited by the DMV proposal because it's an important step in recognizing what we already know to be true. Gender is a spectrum.”