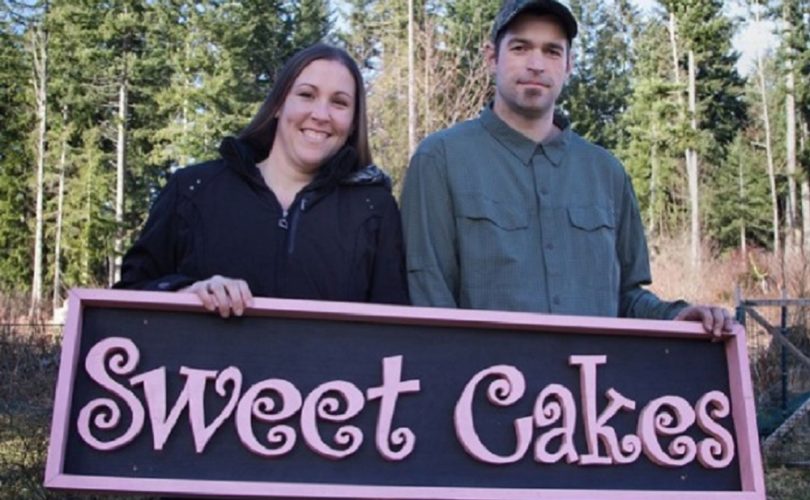 GRESHAM, OR, October 2, 2015 (LifeSiteNews) –  The State agency that ordered an Oregon Christian couple to pay two lesbians $135,000 for refusing to take part in their homosexual “wedding” has begun legal proceedings to seize the couple’s assets.

Aaron and Melissa Klein, of Sweet Cakes by Melissa, were fined by an administrative judge this past spring after declining in January 2013 to bake a cake for the same-sex event based on their religious beliefs.

The fine had been ordered by The Oregon Bureau of Labor and Industries, which had accused them of violating the Oregon Equality Act of 2007.

“Our agency has docketed the judgment and is exploring collection options,” said Charlie Burr, communications director for the Bureau, The Daily Signal reports.

Docketing the judgment means putting it on the formal records of the court, and is the first step the Bureau must take in the course of seizing the Kleins’ house, property, or other assets in place of their payment of the fine.

The Bureau had also placed a gag order on the Kleins’ when ordering the fine, commanding them to “not to speak “publicly about not wanting to bake cakes for same-sex weddings based on their Christian beliefs.”

“The goal is to rehabilitate,” Bureau Commissioner Brad Avakian said at the time. “For those who do violate the law, we want them to learn from that experience and have a good, successful business in Oregon.”

The Kleins’ filed a petition for review with the Washington Court of Appeals in July, after the Bureau’s final order upholding the $135,000 fine.

Their attorneys had also asked the Bureau for a stay, which would have put payment of the fine on hold until after their appeals ruling, but the Bureau denied the request.

In the process of attempting to collect the fine, Bureau attorneys told the Kleins’ to obtain a bond or an irrevocable line of credit.

The Kleins’ object to both things, as the former would equate to them handing the full fine amount over to the state, and the latter would mean a permanent loss of roughly $7000 for them even if the Kleins’ prevail in the end.

The Bureau remains unsympathetic to the Kleins,’ more recently in the wake of fundraising campaigns executed in support of them.

“It’s difficult to understand the Kleins’ unwillingness to pay the debt when they have, very publicly, raised nearly a half million dollars,” Burr stated. “They are entitled to a full and fair review of the case, but do not have the right to disregard a legally binding order.”

Aaron Klein has said that the dollar figure attributed to the fundraising has been exaggerated.

1
WATCH LIVE: LifeSite’s 25th Anniversary Gala – streaming now
2
Dr. Robert Malone: Endless mRNA jabs are in the works as the CDC and FDA play ‘hide the data’
3
New video highlights Canadian cricket farm amid ongoing push to switch out beef for bugs
4
Open letter to Elizabeth Warren: Why do you campaign so strongly for the murder of the unborn?
5
Yes, the rosary is a mighty weapon against evil. It’s the solution, not the problem
Subscribe to Daily Headlines »