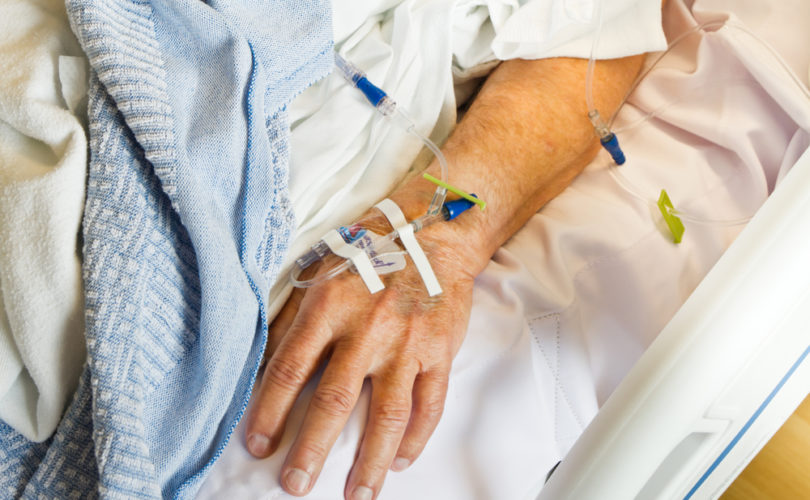 SALEM, Oregon, June 13, 2017 (LifeSiteNews) – A bill allowing the starvation and dehydration of dementia and mentally ill patients against their will passed the Oregon Senate 17-13 on June 8.

Oregon Right to Life has been battling SB494 since it was introduced, warning it's a “devious” bill that's “craftily written so as to hide its true intent.”

SB494 would remove safeguards in Oregon law that protect the right of patients to receive food and water as part of basic treatment. It would give healthcare representatives power to potentially coerce doctors into starving patients against their will.

Under current Oregon law, if it's unclear what a mentally incompetent person desires or wants, the person's healthcare representative does not have the authority to end the incompetent person’s life unless the person is in a specific end-of-life situation.

SB494 was introduced after a dispute between the husband of an Alzheimer's patient and her nursing home. The patient, Nora Harris, had filled out an advance directive saying she didn't want to be fed intravenously.

She began needing helping using utensils. Harris could still eat with her hands and was still expressing a desire to eat.

Her husband filed a lawsuit to get her nursing home to stop feeding her.

The nursing home, Fern Gardens, said it would not force Harris to eat but that it only wanted to continue providing her the option of basic food and water. Mr. Harris lost; the Harris family maintains that their mother would want to be starved and dehydrated rather than live in such a state.

The way advance directives currently work in Oregon preserves Oregonians’ ability to receive food and hydration even if they lose mental competency. SB494 would undermine this.

“In spite of amendments, SB494 remains a deadly bill,” Gayle Atteberry, executive director of Oregon Right to Life, told LifeSiteNews via email. “It is a tragedy that the liberal senators believed the talking points of the big insurance companies and right-to-die proponents about this bill.”

Atteberry said SB494 was sold “as a basic 'update' to Oregon law. The reality is that it will remove current safeguards in Oregon's advance directive statute that protect conscious patients’ access to ordinary food and water when they no longer have the ability to make decisions about their own care.”

Currently, a person in Oregon can fill out an advance directive that specifies the types of care they will want and designates a person as their healthcare representative if they become mentally incompetent.

“The current form gives ample room for a person to write his/her complete instructions for end-of-life care including if the patient wants tube feeding or not,” Oregon Right to Life explains. “The law also limits the authority of a healthcare representative to make decisions for a patient to only what the patient designates on the form.”

SB494 removes the advance directive document from established Oregon statute, meaning “there could be situations where an incompetent person’s life may be ended according to the wishes of their healthcare representative, even if it’s against the unwritten or ambiguously written desires of the incompetent person.”

The bill “opens a door to a whole new classification of people who can be legally killed,” Atteberry wrote in a June 7 blog post. It “opens the doors to killing conscious, non-dying adults, incapacitated because of mental illness, who have not asked to be killed. The clear motive for the killing is money. A first grader can do the math as to how much money it saves to kill a person rather than allow him to live.”

An Oregon Right to Life fact sheet explains, “In the current advance directive, in order to make a life-ending decision for an incapable person, a healthcare representative must be expressly given the legal authority by the patient, except in limited circumstances (ORS 127.540). Senate Bill 494 removes the advance directive from statute and makes other changes that would eliminate this explicit limit on the authority of the healthcare representative.”

“Instead of a person having to opt out of life-sustaining treatment on an advance directive, Oregonians will likely need to specifically opt in to ensure that their healthcare representative does not end their life,” the pro-life group warns.

Only one Democrat, Sen. Betsy Johnson of Scappoose, voted against the bill. Only one Republican, Sen. Jeff Kruse of Roseburg, voted for it.

“We are grateful for the pro-life senators who stood by the truth,” said Atteberry. “We will now turn our attention to the House.”

Oregon was the first state to legalize assisted suicide in 1997.