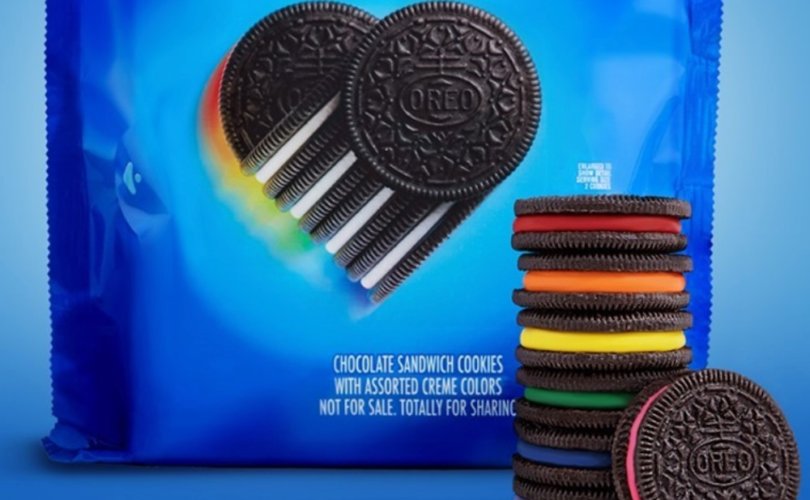 October 13, 20202 (LifeSiteNews) – OREO has partnered with an LGBT organization to release a limited edition of its signature black and white cookies in rainbow colors.

The rainbow OREO cookies are not available in stores and can only be obtained by sharing a photo on Twitter or Instagram demonstrating “allyship” to the homosexual movement using the #proudparent and #giveaway hashtags.

The organization with which OREO is partnering is PFLAG.

PFLAG came into existence in the early 1970s when a mother marched with her son in what some regard as the first homosexual “pride” parade, New York's Christopher Street Liberation Day March parade. The idea for more parents to come together in “support” of their actively homosexual children was born, and groups were started around the nation. PFLAG originally stood for “parent flag” but evolved into an acronym for “Parents and Friends of Lesbians and Gays.” Now it's just simply known as PFLAG.

OREO and PFLAG delivered an ad featuring a young and nervous lesbian couple traveling in car. They pull up to a house where older parents await. Introductions are made but a wary father hangs back. Another young couple – a heterosexual couple with a child – enters and both are warmly embraced by the father. One lesbian looks wistfully at her partner. In a later scene, the lesbians are cuddling on the couch and feeding each other OREOS when the father walks by. He has flashbacks of his daughter eating OREOS as a little girl. The next morning, the father surprises his daughter and her lesbian partner by painting his white picket fence in rainbow colors. His daughter is visibly moved and he embraces his daughter’s lesbian partner.

The website promoting the rainbow OREO cookies says that “for over 100 years, OREO has been bringing families together.”

“That's why we launched a partnership with PFLAG, the country's oldest LGBTQ+ ally organization, to create #ProudParent, a year-long initiative designed to shine a spotlight on the powerful impact love & acceptance can have on LGBTQ+ youth,” it continues. “Together we're committed to empowering and inspiring parents, families, and allies to come out in loud, public support.”