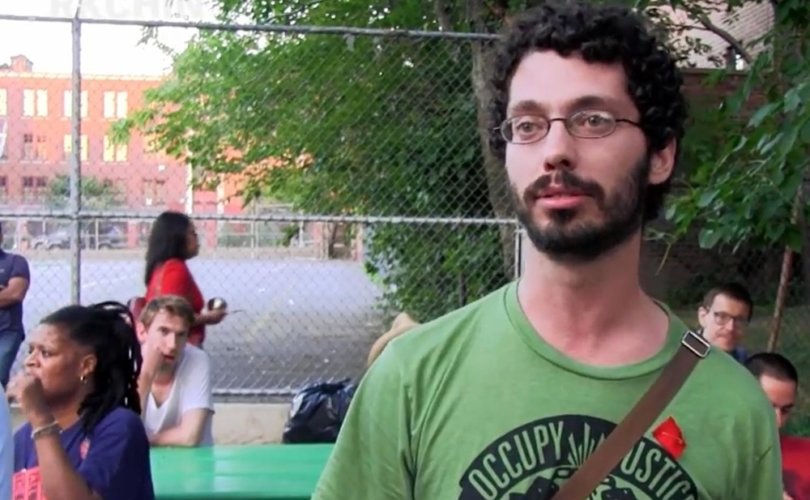 WASHINGTON, D.C., December 21, 2018 (LifeSiteNews) – An organizer behind the Antifa group that orchestrated mobs threatening the families of Sen. Ted Cruz, R-TX, and Fox News host Tucker Carlson has been identified, as has his history of working with Democrat members of Congress, according to a report this week by the Daily Caller.

In September, an Antifa group called Smash Racism DC descended on Cruz and his wife at a restaurant in the nation’s capital, forcing them to leave their dinner and then declaring online, “You are not safe […] We will take from you the peace you have taken from so many others.” Last month, members of the group gathered in front of Carlson’s home while his wife was there alone, chanting things like “we know where you sleep at night” and at one point slamming against the front door hard enough to crack it.

On Wednesday, the Daily Caller (which Carlson co-founded) reported that “Chepe,” a Smash Racism DC organizer, is an alias for Joseph “Jose” Alcoff, a 36-year-old payday campaign manager for Americans for Financial Reform. In his day job, Alcoff lobbies lawmakers on financial policy, and has been quoted by and/or appeared at events with Democrat Sens. Dianne Feinstein, Tammy Baldwin, and Sherrod Brown, and Democrat Reps. Don Beyer and Maxine Waters.

As Chepe, Alcoff says he “hate[s] this country” and wants to “build a world that is socialist and communist in a sense of not having property.” He also has a long history of endorsing violence, including calling on rich people to “die in a fire, or someday we will kill you in a fire”; wishing a “very public death” on future president Donald Trump; advising his fellow leftists to “dispense with nonviolence,” declaring “police lives don’t matter” and “can all burn in hell”; and more.

Last month he insisted he had “nothing to do with” the targeting of Carlson’s home, but joked about his Twitter handle giving that impression. Alcoff’s account has since been made private and the name it was using at the time is unknown, but it is archived as “official #GeorgeHWBushDeathParty account.”

Alcoff has also endorsed similar tactics in the past, saying in a 2016 interview as Chepe that “You have to expose [so-called fascists] and you have to expose where they live, their names, what they do for a living.”

Alcoff has also used another name, Jose Martin, to publish commentaries and make media appearances that are more radical than Joseph Alcoff, but less violent than Chepe, advocating things like a “socialist direction” for the country and a “cop-free world.”

“Alcoff left nearly no connections between his real identity and Jose Martin and Chepe,” the Caller’s Andrew Kerr explains, “but a Daily Caller News Foundation investigation of public records, social media posts, media reports, books, protest videos and podcasts dating back to 2004 found that all three identities are actually one person, posting online from the Twitter handle @Sabokitty.”

Ultimately, Kerr explains, everything came together with the discovery of a 2015 panel discussion video in which Alcoff participated as Jose Martin, but was identified both as Chepe and as the author of an article published under his legal name.

The Caller says Alcoff has ignored multiple requests for comment. He, his mother Linda Alcoff (a Hunter College and City University of New York philosophy professor), and his brother Sam Alcoff (a producer on the left-wing program Democracy Now) have all made their social media accounts private.

The next day, the Daily Caller reported that Alcoff’s employer, Americans for Financial Reform, has also ignored requests for comment, but did attempt to change his name to “Jose A” in multiple press releases, before restoring his last name shortly afterward.