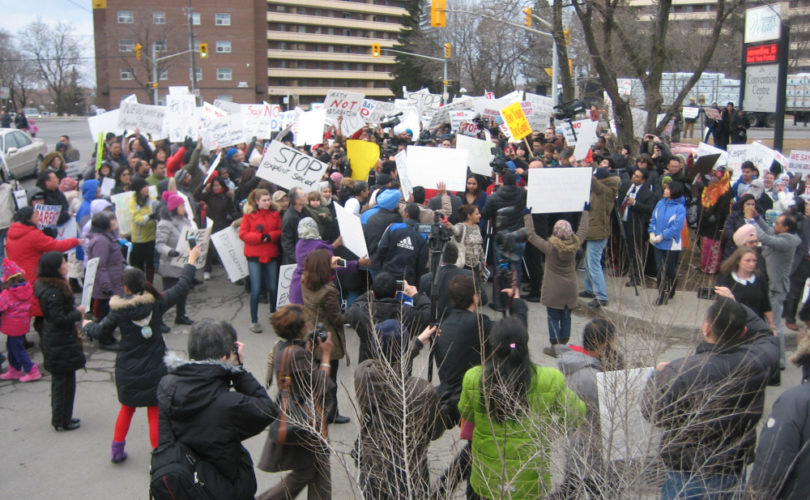 TORONTO, August 31, 2015 (LifeSiteNews) – Ontario parents will be protesting on September 2 in nearly 100 of the 107 ridings across the province, demanding that their local MPPs work to repeal the Liberal government’s radical sex-ed curriculum set to roll out in the province’s publicly funded school this September.

Premier Kathleen Wynne’s “total disregard for the concerns of hundreds of thousands of parents is completely unacceptable, and if she doesn’t want to listen to parents, hopefully the Members of Provincial Parliament who represent them will,” said Christina Liu, a mom and President of the Parents Alliance of Ontario.

Yvonne Dienesch, organizer for the rally in the Renfrew-Nipissing-Pembroke riding, agrees. She told LifeSiteNews that she doesn’t know how many people will show up for the rally in Pembroke, but she’s been spreading the word and “I have a feeling it’s going to go pretty well. Something tells me.”

She said she told Tory MPP John Yakabuski that, “You’re a Christian, John, you have a duty to speak out, because you’re a Christian and you’re our MPP.” Dienesch added that she suspects Yakabuski is “on our side in his heart, but he still puts his political thing above speaking out.”

Dienesch has been writing letters to the four newspapers in the area to protest the Liberal sex-ed curriculum, which she says will corrupt children and “destroy their natural modesty” and as a result, they are “going to become promiscuous, they’re going to end up with sexually transmitted diseases, broken marriages, abortions, broken hearts, and most of all lost souls.”

She and co-organizer Janice Dunn “were both very irate” about the sex-ed curriculum, Dienesch told LifeSiteNews, adding that “Janice had never been an activist before ‘but I am now’ she said, because it has to do with her grandchildren; she’s very worried about her grandchildren.”

That’s echoed by Anna Gibbons who will be protesting outside the Brockville office of Tory MPP for Leeds-Grenville, Steve Clark.

“I love children and I care about them,” the former elementary supply teacher and grandmother of two elementary school-aged children told LifeSiteNews. “I have an idea what the children are like and what they can absorb, and this curriculum is age-inappropriate totally” and “sexualizes children.”

The Liberals did not consult the parents, Gibbons said, but surveyed only one parent from each school. She added that the sex-ed agenda is “more a shaping” of the children’s thinking and not based on fact, as pointed out recently by American psychiatrist Miriam Grossman.

Gibbons said she expects between 30 to 50 people to show up, and she’s hoping MPP Clark will be there September 2, adding that she’s asked his office that Clark or a representative “be there so we can share our grievances, so he can fight for us.”

Clark has “four or five children,” she observed, “so I would think that he would be interested in this enough to give it some thought, or more than some thought.”

Peter Baptiste, a scholar, writer and father of six home-schooled children will be heading up the rally in Ottawa West-Nepean, home of Liberal Bob Chiarelli, Minister of Energy.

Baptiste told LifeSiteNews that the sex-ed curriculum “represents a massive assault on democracy in Canada.” The Liberal government “without any elected mandate to do so” is “basically cramming down our throats a radical sex-ed program that, if implemented, will have massive social consequences by indoctrinating our children,” he said.

Because he suffered sexual abuse as a child, Baptiste is aware how sexual predators can manipulate children, he said, adding that in his view, this sex-ed curriculum, by introducing children to “notions of consent” and sexual concepts at too early an age, will make it easier “for pedophiles to manipulate children.”

“We want the government to know that voters who love democracy will remember a government that imposes totalitarian-style belief control through the forced indoctrination of our children,” Baptiste pointed out.

Jakki Jeffs, president of Guelph and Area Right to Life, will be heading the protest in front of Liberal Education Minister Liz Sandals’ constituency office.

She told LifeSiteNews that one of the reasons her organization is involved is because the sex-ed curriculum, if implemented, “will affect our ability when we go into the schools discussing chastity [and] fetal development.”

“Who would we be if we didn’t keep pointing this out?” she told LifeSiteNews, adding that the “folks who are with us actually want our rights as parents to remain untrampled by Ms. Wynne’s government, and for her to realize that her view are her views, but she cannot inculcate those views into our kids through this educational system.”

Sandals has persistently dodged parents on the sex-ed issue since the curriculum was introduced in February, even though, Jeffs said, she told the minister’s office that “any time [Sandals] could make it, our speakers were ready to come.”

“I had never thought that she would do that to us,” Jeffs admitted, adding that “I’m absolutely not sure” if Sandals will ever meet with them.

That only confirms for Jeffs the Liberals’ attitude that that they, rather than parents, “know best for your children.”

Sarah Proud, who is organizing the rally at Tory MPP Randy Hillier’s office in Carleton Place, wrote in an email to LifeSiteNews that she’s protesting because “our rights and freedoms as parents and Canadians have been stripped from us. Tens of thousands of parents have said, ‘NO. Do not teach this material to our children.’ But their concerns have gone unheard. This is not democracy.”

Proud pointed out that parents, not experts, know what’s best for their kids. “We aren’t all perfect, we don’t always get it right, but we have our children’s best interests at heart. We know each of them intimately, we want them to succeed, we care for them like no one else can.”

And she’s also appalled that the Liberals can act in such a high-handed manner when it is evident the sex-ed curriculum is opposed by so many parents.

“If the provincial government is willing to overstep their authority by implementing the new sex-education curriculum, what’s next?” questioned Proud. “I enjoy my freedom and I plan to fight for it.”

“People have to know what this Liberal government is doing regarding this sex-ed curriculum and how it’s going to effect their children and grandchildren,” pointed out Joe Sinicrope.

He said Conservative MPP Vic Fedeli of Nippissing had an engagement the same time as the rally, so asked to meet with parents beforehand. “He wants us to be there to accept what we have to say personally.”

Sinicrope also disseminated information on the Nippissing mini-rally through his contacts in the Knights of Columbus, and has fielded local media enquiries. He told LifeSiteNews that criticism of the Liberal sex-ed curriculum can be summed up this way: “All you have to say is: Ben Levin.”

Many critics of the Wynne sex-ed curriculum point to Levin as the architect of the 2010 version, which was scrapped by then-Liberal Premier Dalton McGuinty because of parental backlash, and is the prototype for the 2015 sex-ed curriculum.

Jack Fonseca, rally coordinator for Campaign Life Coalition, urges all parents opposed to the curriculum to join in a mini-rally on September 2, or to volunteer to lead one if there is not one yet planned in their constituency. At this point, there are rallies planned for 98 of the province’s 107 ridings.

“It’s time for the Wynne Liberal government to respect parent’s authority as primary educators and to drop its plan to foist this unpopular, age-inappropriate and overly explicit school program on our children,” Fonseca said.

For more information for a rally in your area, go here.