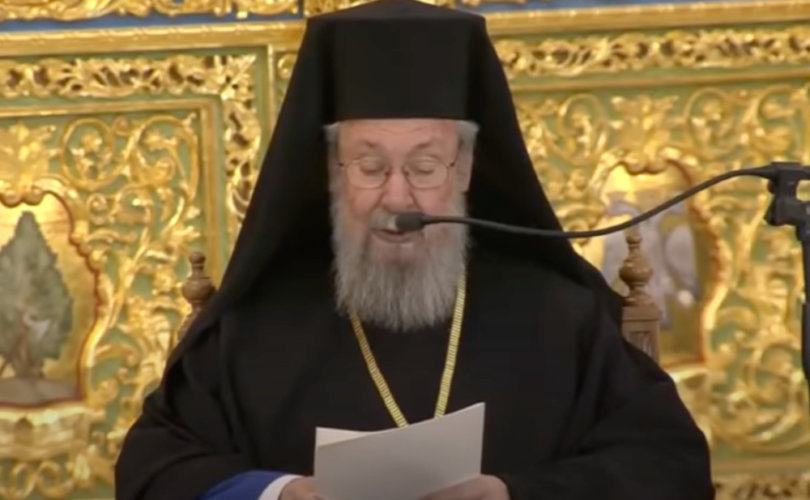 NICOSIA, Cyprus (LifeSiteNews) — The Orthodox archbishop of Cyprus has threatened that unless his clergy take the abortion-tainted COVID shots by January 15, they will be kicked out of his territory.

Archbishop Chrysostomos II of Cyprus announced his most stringent measures to date pertaining to the COVID-19 injections, as reported by protothema.gr.

After January 15, priests will have to present a vaccination certificate to Chrysostomos, and if they do not, or refuse the injection completely, then they “will not continue to be clergy of the Archdiocese from next month.”

Exemptions will be made by Chrysostomos on the grounds of medical reasons only.

Should priests not comply with the prelate’s jab mandate, Chrysostomos will refer them to a doctor approved by the archdiocese. If a medical issue is raised which “makes vaccination prohibitive,” then the priest will be exempt from the mandate.

Otherwise, Chrysostomos II will order them to seek admittance to a different diocese.

Chrysostomos stipulated that an unvaccinated person was to be stripped of the freedoms and duties which vaccinated people were enjoying. “If they don’t care about themselves let them stay in their little house, why should others get anything,” he stated.

80-year-old Chrysostomos, installed in office in 2006, was among the first to take a COVID injection, receiving his first dose in late December 2020.

The archbishop has now taken three doses of the experimental abortion-tainted gene therapy. His third dose was somewhat of a public occasion, being given to him by General Director of the Ministry of Health Christina Giannaki, with Minister of Health Michalis Hadjipandelas watching.

He used the occasion to quote Scripture to call for a separation of religion and science, and promoted the abortion-tainted jabs.

Chrysostomos has a long history of repeatedly urging people to take the injections, often berating those who do not wish to receive the shots.

At the outset of the COVID era he rebuked healthcare workers who were calling for churches to be re-opened for worship, stating “they should mind their own business; there is no need to meddle in the matters of the Church.”

Adding how they “could rise up afterwards if they did not like what he told them,” Chrysostomos said the church would not be swayed by “do-gooders.”

July 2021 saw the prelate tell young people that taking the injection was the only to “move forward,” and that “they must comply … so that this country can see better days, see prosperity, see development and see peace.”

A few days later, he announced that he was prepared to fire the eight unvaccinated archdiocesan employees, after having warned them in a private meeting. “I respect them, why shouldn’t they respect me?” he asked, adding that he would ensure the cutting of the €5 million the archdiocese provides to cover clergy salaries, to pressure priests to get the jab.

“I will not give money to those disobeying the orders of the Holy Synod,” he declared, “to teach some respect to any priests and bishops who disobey me.”

Doubling down on his war against the unvaccinated, Chrysostomos attacked those who described the COVID jab as a work of the devil, suggesting they did “not have true faith in Christ,” nor “believe in his resurrection.” Rather, it was a “Christian duty” to take the injections, he argued.

Francis has regularly used similar language when promoting the injections, most recently alluding to COVID vaccination as being “a moral obligation.”

However, many laity and clergy have expressed concern over the moral nature of the injections. In a paper released on December 12, 2020, Bishop Athanasius Schneider, along with co-signers Cardinal Janis Pujats, Bishop Joseph Strickland, and Archbishops Tomash Peta and Jan Pawel Lenga, expressed their strong conviction that any use of a vaccine tainted with the “unspeakable crime” of abortion, under any circumstances, “cannot be acceptable for Catholics.”

In the case of vaccines made from the cell lines of aborted human fetuses, we see a clear contradiction between the Catholic doctrine to categorically, and beyond the shadow of any doubt, reject abortion in all cases as a grave moral evil that cries out to heaven for vengeance (see Catechism of the Catholic Church n. 2268, n. 2270), and the practice of regarding vaccines derived from aborted fetal cell lines as morally acceptable in exceptional cases of “urgent need” — on the grounds of remote, passive, material cooperation. To argue that such vaccines can be morally licit if there is no alternative is in itself contradictory and cannot be acceptable for Catholics.