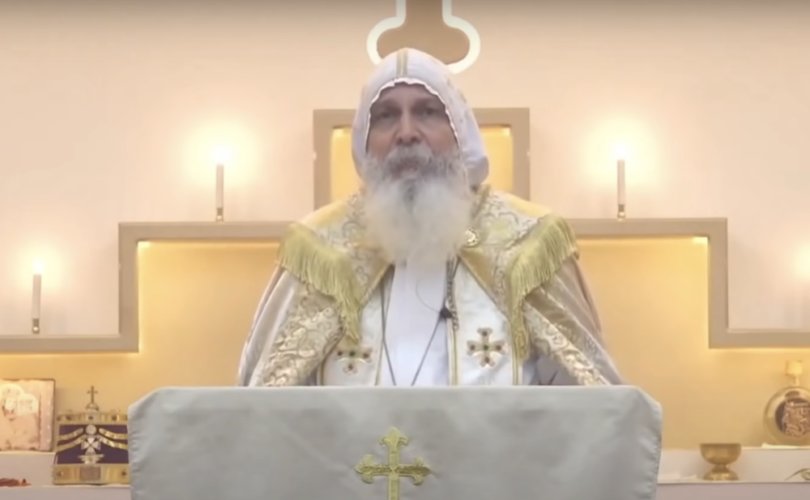 AUSTRALIA (LifeSiteNews) – Eastern Orthodox Bishop Mar Mari Emmanuel recently preached strongly against the government mandates that have locked down many Australian for some time.

“If you think you are a Christian politician and you know very well what is happening is nothing more than deliberate evil action by the secret societies, yet you are going ahead with it, and you are endorsing it and you are implementing it, and you are forcing it,” he said, “you are bringing more force, police force, army to make sure that these areas adhere to the lockdowns, then you are a traitor! You are Judas Iscariot because you have sold your Master Jesus.”

The bishop did not explain what he meant by “secret societies,” though some Christians use the term to refer to groups like the Freemasons. It is possible that the bishop believes that such secret societies are behind the push for lockdowns.

Regions of Australia have adopted severe lockdown measures, especially in the State of Victoria which has recently extended its lockdown until 70% of eligible residents have received at least one dose of a COVID-19 vaccine.

Rebel News in Australia has covered the situation in Victoria extensively. Reporter Avi Yemini provided some detailed video footage of the tensions that have arisen in Melbourne as a result of the continual lockdowns:

Bishop Emmanuel’s parish is located in a Sydney suburb that is now entering its third month of lockdown after having imposed restrictions on June 26. Currently in Sydney, residents are not allowed to go further than five kilometers from their home for “non-essential” reasons.

According to 9 News, the lockdown will last in the Sydney area until the end of September, at least. Everyone in the region of New South Wales – which is where Sydney is located – must wear a mask outside of their homes, except when exercising.

In certain suburbs there is also a curfew that prohibits leaving home between 9PM-5AM. People living in hotspot areas – spread across Sydney’s south-west and western suburbs – are limited to exercising outdoors for just one hour per day. Police have also been given “special” powers in Sydney, and parents are urged to keep children at home.

Reiterating his condemnation of Australian politicians who identify as Christian, the bishop said: “If you think that in the position you are occupying you cannot do anything because there is so much force that is forcing you to what you need to do, and you look around and you say ‘I can’t change nothing, I can’t stop nothing;’ I will accept that you are a true Christian if you resign from that position.”

Bishop Emmanuel implored leaders to “stop enslaving people,” and said that leaders who supported lockdowns were “selfish,” that they would “destroy” themselves by their actions.

He went on to make a heartfelt appeal for truth saying, “enough lies! Enough lockdowns, this is slavery.”

The bishop also stated that COVID “can be treated quite easily with proven medications.”

Slamming his fist on his podium he called out elites Bill Gates and George Soros, saying of each man, “let him jab himself with” the vaccine.

He then asked those listening, “is there still conscience living in people?… Is there somebody that has a conscience or have you all killed it?”

“There are families calling me so stressed, so sad, they are concerned but they have no choice because their employer says ‘if you do not get the jab, you cannot go back to your work, you will lose your job,” he went on. “They are afraid of losing their job… Are you heartless? Are you human?” he asked the Prime Minister of Australia and the Premier of New South Wales.

He added, “governments were put on earth by God, Jesus Christ, in order to protect and preserve my rights, not to impose evil actions against me… Stop forcing people to take vaccinations because of ‘safety’ measures. Get a life.”

“Are you all cowards?” he asked of politicians. “Has money blinded you?”

Bishop Emmanuel finished his remarks with a “message for the Australian government, this is a message to every Church leader: woe unto you when you choose to be the older brother not the younger one [referring to the story of the Prodigal Son] woe unto you.”

This is not the first time that the Orthodox bishop has called out Australians, as he preached a similar message in July, asking, “what has become of Australia?”