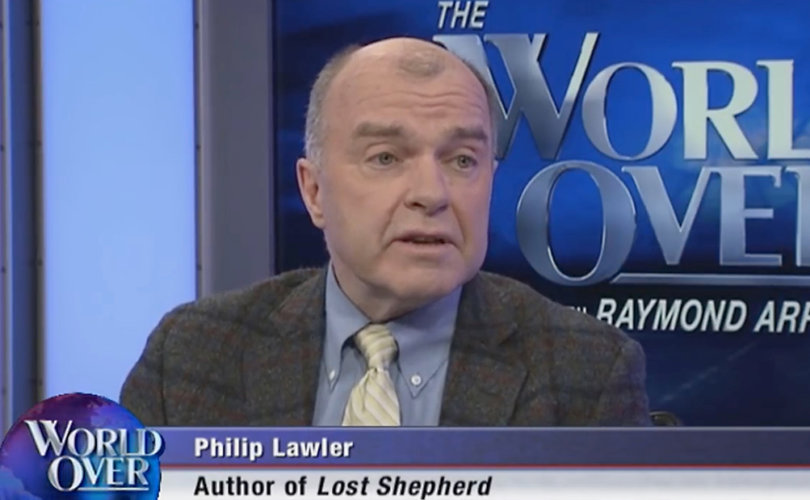 WASHINGTON, D. C., March 2, 2018 (LifeSiteNews) – Pope Francis has deliberately created confusion to allow for Catholic teaching to be circumvented, a longtime Catholic commentator has said, and Francis’ inner circle contains people more radical in their beliefs than him.

Further, five years into Francis’ papacy, the mandate the pope was given to reform the Curia and Vatican finances has not been satisfied, Catholic World News Editor Philip Lawler said, because it’s not high on Francis’ agenda.

Intervention is needed in the direction Francis is taking the Church, Lawler said in a discussion on The World Over centering on some of the confusing and controversial aspects of the Francis pontificate. (Interview with Lawler begins at 23:05 in the video below)

“Pope Francis has created enough confusion so that there is a huge space for maneuver for people who want to one way or another take an end around around Church moral teachings,” Lawler told Arroyo at the start of their conversation. Arroyo assented this has been done through the Francis pontificate’s much-touted notions of accompaniment and mercy.

Released February 26, Arroyo pointed out the book has earned criticism for Lawler. Others noted prior to his book’s release the significance of Lawler, not at all known as an explosive Catholic observer, feeling compelled to write in criticism of the pope.

Lawler clarified for Arroyo that he did not want to write the book critical of Francis when asked what moved him to do so. It came after an essay he’d written a year ago for CatholicCulture.com when he’d reached a boiling point of frustration with the confusion.

Significant resonation with the frustration

Titled “This Disastrous Papacy,” Lawler recounted that the post prompted more reaction than anything else he’s written in 30 years of journalism. In working on the book, Lawler said he found people in need of reassurance amid the concerning direction of the papacy, along with being beset by the question of whether they were alone in feeling this.

“And I found that as I spoke with these people, oddly enough they felt reassured by what I was saying,” Lawler said. “Because if you say, “No you’re not crazy, yes, there is a problem, we have a problem with the pope,” (people then understand it’s not just them thinking this).

The pope’s apostolic exhortation Amoris laetitia was the final straw for Lawler, who told Arroyo he was originally very enthusiastic about Pope Francis, but over time became more and more concerned, dismayed and disoriented.

“When I saw what happened with the manipulation of the Synod and then with Amoris laetitia coming after it, I said, “This is more than simply imprudence in expression,”' Lawler explained. “This is a deliberate effort to confuse.”

AL achieves the opposite of the Synod’s expressed intent

“The problem is that Amoris laetitia is intentionally unclear on the one question that everybody had topmost in their mind going into both meetings of the Synod,” Lawler reminded Arroyo, “which is, “Will the Church change her perennial teaching that Catholics who are divorced and remarried illicitly cannot receive Communion?”'

“The general impression certainly created by the apostolic exhortation is that the Church has changed her teaching,” stated Lawler.

Arroyo and Lawler discussed the conflicting interpretations of the pope’s document throughout the world, with some bishops saying the Church’s pastoral practice has changed and others saying it had not – and the faithful being left in the middle. They talked as well about how, when pastoral practice is changed, the result is doctrine no longer matters anymore because “the lived doctrine” has become unrecognizable – which is the same end result as changing Church teaching.

“That’s precisely the point,” Lawler told Arroyo. “Why else would Pope Francis have declined to answer the dubia – the perfectly legitimate questions from four cardinals asking him for clarity?”

“Why would you not want clarity?” asked Lawler. “Unless your intent was to provide that fuzzy space in which people can maneuver around Church teaching.”

Arroyo asked Lawler to respond to comments made in 2015 by one member of the pope’s circle, Archbishop Victor Fernandez, that Francis is aiming at irreversible reform in the Church.

Lawler responded that he didn’t know why Francis would have this as his goal.

“But there’s something inherently wrong with the idea of irreversible reform unless what you mean by reform is back to the fundamentals of the Catholic faith,” he added, “because the role of the pope is inherently to conserve, to protect the deposit of the faith.”

Arroyo quizzed Lawler on the provocative nature of his book and its title, and whether he was at all reticent about it.

“I don’t enjoy criticizing the pope,” Lawler told him. “But there’s a point at which in a loving family, if the father has a problem, you have to confront it. Eventually there has to be an intervention – And we need an intervention.”

The men talked about the odd nature of the Francis’ election, and whether there’s any validity to rumors that his election was orchestrated.

Lawler said some cardinals had given the clear impression that they were lobbying for Francis, which is not licit. This did not shock him, and he wished it weren’t the case.

Sharing an excerpt from the book in which Lawler details coming to the troubling conclusion that Francis was a radical leading the Church away from the ancient sources of the faith, Arroyo asked Lawler why Francis would think he could get away with this, or whether the problem is more one of his advisors and confidants.

“I do believe there are people surrounding this pope who are much more radical in their beliefs than he is,” Lawler said. “It is suggestive, again, that with Amoris laetitia Pope Francis does not directly contradict Church teaching – it’s in footnotes, it’s in the space between the lines.”

Because of the confusion that has spread throughout the Church, Lawler shared with Arroyo that people in the last week since his book has come out have asked him a lot of questions about whether the Church has changed its teaching on various things.

“And I say, No,” Lawler said. “But they had that impression; Why? Because the lid is off.”

An absence of authentic reform

Asked by Arroyo if there was a conflict between Francis’ public persona and the means of governing under his pontificate, Lawler said, “yes”.

The cardinals before him were talking about the need for reform of the curia and the economic workings of the Vatican, said Lawler, and for accountability and responsibility.

“But as far as the mandate for reform – it simply hasn’t happened,” he stated. “The curia has not been significantly reformed. There have been some shuffling of responsibilities, but we’re now five years in, and there’s not substantial reform. As far as the economic reform that has tumbled and fallen apart completely.”

“He had a mandate for reform and it’s not happening,” added Lawler. “It’s not at the top if his agenda. He’s doing different things.”

What’s unfortunately happened, he said, is that the old guard at the Vatican has become even more entrenched, “And there’s less accountability than there was five year ago.”

Lawler called upon Catholics to pray, both for the pope and for those around him.

“And as a practical matter, you ask your own bishop to stand up and help bring clarity back in an age of confusion,” Lawler concluded. “If that means saying unpopular things, I’m sorry, well, say unpopular things.”

Why papal adviser is angry with EWTN’s ‘Papal Posse’

Popes before Francis would have rejected his teaching on marriage: EWTN priest