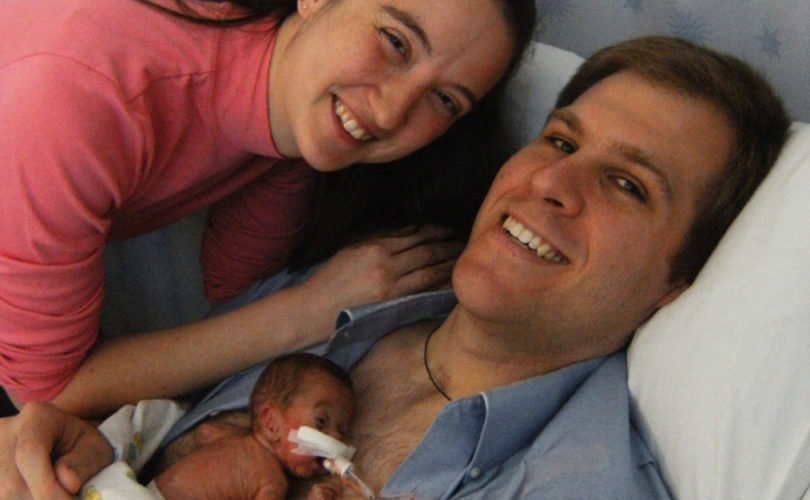 SEATTLE, Washington, November 9, 2015 (LifeSiteNews) – When Miri Ruthford's water broke at only 22 weeks, she and husband Eric knew their baby was in danger.

Because he was so young, doctors doubted the child would live, and they advised Eric and Miri to let him die. The hospital, Seattle's Swedish Medical Center, did not want to “aggressively treat” the preemie.

Eric and Miri, who named the tiny boy Gabriel, wanted the doctors to do all they could to save him, despite the hospital's policy of discouraging intervention for children so fragile. “The doctor said that he advised against resuscitation because the results were just so poor at that (gestational) stage,” recalled Eric.

One doctor even told Eric that though he would follow Eric's request to help Gabriel, “my heart won't be fully in it.”

“We wanted to save him because we believed he still had a chance,” Eric told LifeSiteNews. “He was quite healthy before the birth, it was the pre-term labor that was happening for unknown reasons. We knew he would be in great danger as soon as he was born, but we wanted to try to save him.”

Doctors told the anguished parents that even if Gabriel lived, he could have serious defects, including blindness, deafness, and cerebral palsy.

“We knew he was God's baby no matter what happened,” Eric shared with LifeSiteNews. He said he and Miri were also “somewhat suspicious of the doctors' recommendation to 'let him go' because this was happening in a culture where two thirds of fetuses with Down syndrome get aborted.”

Eric and Miri asked themselves, “Was the same culture telling us to 'give up' because it would be better for a disabled person to not be born?”

“I'm not going to give up on my child just because it's hard,” Miri said.

The pro-life Ruthfords wanted to fight for their baby. “We've always been of the belief that as soon as a child is conceived, it's a child,” Miri explained. She, the daughter of an Orthodox Christian priest, has always been pro-life. Eric told LifeSiteNews that he came to respect the sanctity of life “after converting to Orthodoxy 14 years ago.”

Gabriel's birth weight was only one pound, six and a half ounces. But today, Gabriel is a happy three-year-old. His mother describes him as a little small, but a typical 3-year-old, who likes toy trucks, airplanes, and singing “The Wheels on the Bus” way too much.

Eric tells LifeSiteNews that lately, “Gabriel has been memorizing books by making us read them over and over and then 'reading' them back to us. He goes to preschool and does pretty well there.”

The hospital has since apologized to the Ruthfords.

The Ruthfords' ordeal highlights the fact that modern medicine can save lives earlier and earlier. In October, the American Heart Association and the American Academy of Pediatrics released new guidelines lowering the age for neonatal resuscitation to 22 weeks, down from 23 weeks, based on evidence that with medical treatment, such babies can survive without serious problems.

The Centers for Disease Control reports that about 13,000 babies are born between 22 weeks and 25 weeks in the U.S. each year, with about 5,000 born between 22 and 23 weeks. According to the Seattle Times, 72 percent of babies born at 25 weeks survive, and a clear majority – 55 percent – of those born at 24 weeks live. Even at 23 weeks, over one fourth of babies born make it. At 22 weeks, the percentage drops to below ten percent.

“The challenge is that 22 and 0 days is a much more immature baby than the one born at 22 and 7,” Neonatologist Dr. Andrew Beckstrom told the Seattle Times. “We have a mantra that says every day counts at that gestation.”

Some medical experts, however, are saying those statistics are outdated, and 22 weeks is the new standard for viability. The New England Journal of Medicine published a study in May that found that nearly one out of every four babies born at 22 weeks gestation was able to live after receiving medical treatment.

The study looked at 79 infants born at 22 weeks and found that 18 survived. Of those 18, seven did not have moderate or severe impairment by the time they were toddlers.

The University of Florida's chief of neonatology, Dr. David Burchfield, summarized, “If you don't do anything, these babies will not make it, and if you do something, some of them will make it.”

Eric explained to LifeSiteNews, “The infant brain and body have more ability to recover from and work around an injury than ours do, so there's more hope for their development than you'd think.”

But there's more to this story.

The Seattle Times' report on the Ruthfords ignored something absolutely essential, which Get Religion's Julia Duin noticed:  Eric and Miri's Christian faith grounded them in the truth that Gabriel was a person and worth saving, and their faith sustained them through the agonizing weeks of Gabriel's hospitalization.

“We think about the ordeal of the NICU every day,” Eric told LifeSiteNews.  “It has given me a new understanding of intercession. It's not just asking people to pray for your healing, but also asking people to pick up your slack when you don't say your daily prayers because you are so overwhelmed by what is going on.”

The Ruthfords also admitted to heavenly intercessory help. “Saint John Maximovich of San Francisco is a patron saint of our family,” Eric told us. “The hospital at which all this happened is about eight blocks from the church where St. John reposed in 1966. One of the priests there let us have his relic during Gabriel's birth.”

Eric was a Peace Corps volunteer in Ukraine. His life changed in 2001 when we went from being a “spiritual wanderer” to becoming an Orthodox Christian. Now a published author, lecturer, preemie advocate, blogger, and journalist, Eric has also served as the financial officer of Raphael House of San Francisco, a homeless shelter for families run by Orthodox Christians, who take it as part of their ministry to live in the shelter themselves.

Doctors had little faith in this miracle baby. Now he’s one year old.