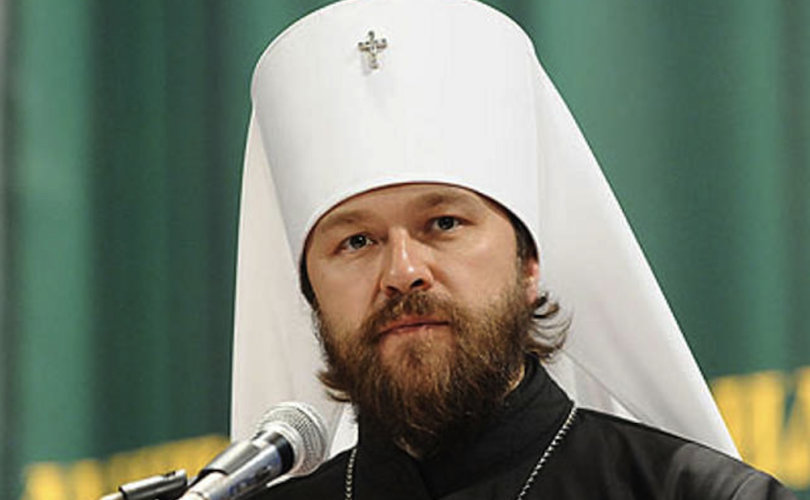 MOSCOW, Russia, October 26, 2017 (LifeSiteNews) – One of the world’s foremost Orthodox leaders says Greece’s new transgender law is a “crime before God and the people.”

Metropolitan Hilarion Alfeyev, chairman of the Moscow Patriarchate's department for external church relations, warned that the new law, which makes gender a matter of personal choice, is not only anti-Christian but anti-human.

“We are speaking about young 15-year-old boys and girls who may later completely change their minds,” Metropolitan Hilarion said.

Under the new law, any boy or girl who feels an internal correspondence to the opposite gender “not only has the right to such a self-perception, but doctors must provide them with this assistance,” he said.

On October 10, the Greek Parliament passed a law granting legal recognition to sex changes without any requirement other than the desire of the applicant, allowing anyone 15 years old or older to legally change their gender.

The Russian Metropolitan warned that the new law will be met with vigorous protests and civil opposition.

“I think the Greek Church will be openly expressing its opinion and protest, as is happening now,” he told a TV interviewer on “The Church and The World.” “In some dioceses, they are ringing their bells as a sign of protest.”

“The archbishop and many hierarchs of the Greek Orthodox Church have come out against the government in light of the adoption of this law,” His Eminence added.

The new law officially makes gender completely unrelated not only to biology but to any medical or psychological diagnosis confirming gender dysphoria. The government sanction of gender-by-declaration need not be evidenced by therapy, testing, counseling, hormones, or surgery.

The world leader also took on Greek Prime Minister Alexis Tsipras, whose strong support of “On the Free Change of Sex” won 171 votes in a 300-member Parliament.

Metropolitan Hilarion said the Prime Minister’s actions are in direct contradiction to the majority of Greek citizens and the two-millennia-old foundations of Greek civilization.

“Mr. Tsipras, despite being the prime minister of an Orthodox state, does not hide his atheistic convictions,” the hierarch said. Tsipras “does not hide the fact that religion means nothing for him.”

As LifeSiteNews reported, Orthodox leaders are decrying the new law.

“It is an outrageous inspiration for someone to change his gender in a few minutes, with a simple declaration, so contrary to what God has gifted people with,” the clergy of the Kalavrytan diocese wrote in a statement. “Whoever has ‘gender dysphoria’ is mentally ill.”

The clergy statement says the “anti-Christian and anti-Greek” law is a “deadly sin” related to “bestial deviation,” and will result in homosexuals adopting vulnerable and impressionable young children.

Greek Church leaders unanimously condemned the law as “immoral,” “blasphemous,” “unnatural,” “madness,” “satanic,” “sin,” an “affront to society” and a threat to “the sanctity of family.” The Holy Synod of the Orthodox Church of Greece warned that the law will result “in the dissolution of social cohesion and the spiritual death of man.”

Stavros Kontonis, the Minister of Justice, Transparency and Human Rights, admitted that the law was passed because of heavy pressure from globalists.

Previously in Greece, government legal recognition of a gender change had to provide proof of surgery and a psychiatric evaluation.