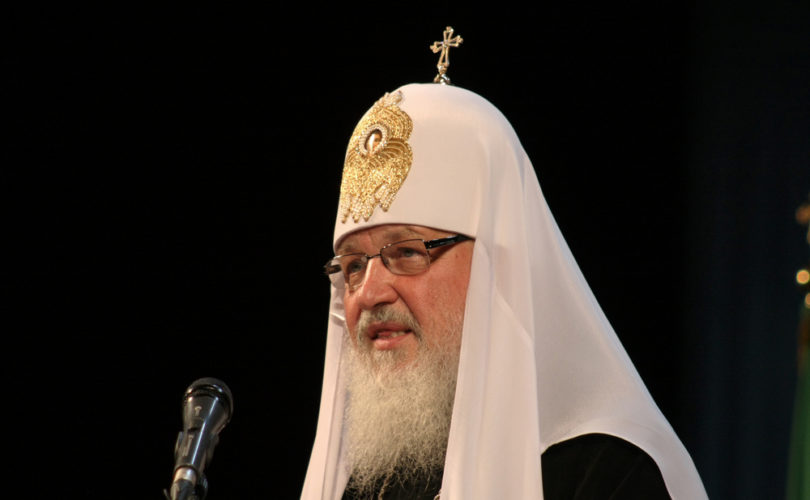 MOSCOW, Russia, March 23, 2016 (LifeSiteNews) — The leader of Russia's 200 million Orthodox Christians says the modern world is steeped in heresy as never before.

The “heresy” he speaks against is “worshipping the human” and enshrining laws that give the “right” to sin, which the Patriarch calls “the new idolatry that removes God from human life.”

And he warns that the consequences of this modern heresy “can become apocalyptic.”

“It is specifically at overcoming this present day's heresy, the consequences of which can become apocalyptic, that the church must aim the force of its strength, its word, its thought.”

Speaking from the pulpit of Christ the Savior Cathedral in Moscow, Patriarch Kirill said, “Today we are [seeing] a global heresy of bowing down to man, the new idolatry that removes God from human life… Nothing like that had even happened on a global scale before.”

Preaching on Orthodoxy Sunday, the first Sunday of Orthodox Lent, the Primate lamented that society's criterion of truth has become individual “rights,” and such a mindset “has begun a revolutionary exile of God from man's life and that of society.”

His All-Holiness said the heresy began in Western Europe and America, but is now worldwide, infesting even his own country.  “The idea of ​​a life without God is developing on a large scale around the world,” he warned.

He criticized the elevation of human rights to the level above morality, decency, the Bible, and even God Himself. “We are seeing how concerted efforts are being made in many prosperous countries to establish by law the person's right to any choice, including the most sinful ones, those that contradict God's Word, the concept of holiness, the concept of God,” he said.

The Patriarch then dedicated his Church to fighting this modern heresy.  “It is specifically at overcoming this present day's heresy, the consequences of which can become apocalyptic, that the church must aim the force of its strength, its word, its thought.”

“We must defend Orthodoxy,” Kirill said.