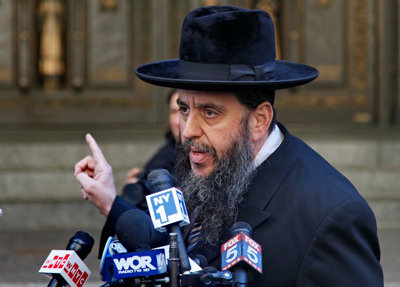 “It’s really blasphemous, it’s duplicity, and it’s dishonest,” Levin told LifeSiteNews. “And my only question is: Are these people who say these things, whether they believe it in their heart or not, just dissembling?”

On Tuesday morning, the ADL posted a tweet promoting “The Jewish Rally for Abortion Justice,” which was held the same day in Washington, D.C. “Reproductive freedom is a Jewish value,” wrote the Jewish organization, which is committed to “fighting antisemitism and hate.”

Reproductive freedom is a Jewish value. We’re proud to join @NCJW at The #JewishRallyForRepro today! Even if you’re not in DC, you can still join – make your voice heard in the fight for abortion access by attending virtually. Register at https://t.co/ewj20C4Kb7 pic.twitter.com/gXOYnYJzUW

This statement echoes a May 6 op-ed written by reform Rabbi Daniel Bogard and published in the San Francisco Chronicle. The St. Louis, Missouri-based rabbi wrote:

Beyond being a violation of the human rights of pregnant people, limiting access to abortion is an imposition of governmental Christianity on us all.

And it infringes on the religious liberty of every American Jew.

For Jews, it is no exaggeration to say that access to abortion services isn’t just tolerated, it is a religious requirement, and has been for thousands of years.

Rabbi Levin, a longtime pro-life and pro-family activist who has addressed the annual March for Life for many years, explained “that these people, these libs, attempt to ape every liberal value, or lack thereof, and try to apply that to Jewish values, which is totally duplicitous. It’s totally untrue.”

He went on to explain the relevance of Genesis 9:6 and its authoritative interpretation throughout rabbinic tradition. “He who sheds the blood of man, by a man his blood shall be shed,” the verse reads.

According to Levin, the ancient Rabbi Yishmael and his rabbinic colleagues explained that in the original Hebrew, when “the prefix ‘ba’ precedes a word, it means ‘inside,’ let’s say. So, [a deeper interpretation would be] ‘He who sheds the blood of a man inside a man, his blood shall be shed.’”

“[Therefore, the same phrase] that forbids homicide and provides a penalty, a death penalty, for homicide, includes within it a proscription, a prohibition against feticide. In other words, both are derived from the same source which clearly indicates the severity of feticide. So, for them to ignore this it is really outrageous,” he said.

“And some of our greatest rabbinic sources discuss the antecedent of the prohibition of abortion as deriving from the commandment of the decalogue, ‘Thou shall not murder,’” Levin continued.

“Therefore, what Rabbi Yishmael says, applies throughout the ages,” he said.

Dr. Zev Zelenko, an orthodox Jew who is credited with pioneering an early treatment protocol for COVID-19, confirmed this point, telling LifeSiteNews, “Regarding abortion, it is only permitted under the strictest of circumstances. If the mother’s life is put in any danger and done as early as possible in the pregnancy.”

However, the late Dr. Bernard Nathanson, who converted from being an atheistic Jew, abortion advocate and abortionist, to a Catholic pro-life activist and bioethicist, once wrote the following:

There are no conceivable clinical situations today where abortion is necessary to save the life of the mother. In fact, if her health is threatened and an abortion is performed, the abortion increases risks the mother will incur regarding her health.

Even Alan Guttmacher, the late Planned Parenthood official and abortion advocate, affirmed in 1967:

It is possible for almost any patient to be brought through pregnancy alive unless she suffers from a fatal illness such as cancer or leukemia; and if so, abortion would be unlikely to prolong, much less save life.

While adults who identify as being Jewish make up only 2.4% of the adult population in the United States, their acceptance rate for abortion is one of the highest of any “religious group.” A full 83% of American Jews believe the killing of preborn children should be legal in all or most cases behind only Unitarians, atheists and agnostics.

Addressing the ADL and the other Jewish rabbis and organizations who call abortion access “a Jewish value,” Levin said, “You’re free to start your own religion which celebrates the babies you murder by turning lights on buildings, etc., but don’t have the chutzpah, the temerity, to try to call this traditional Torah Judaism, because it certainly is not.”

Zelenko concurred with Levin and addressed the statements of Bogard, saying, “The reform rabbi may speak for the reform movement, but he does NOT speak for Orthodox Jews who live according to Jewish law that was given to Moses by God.

“God said, ‘be fruitful and multiply,’ and not ‘abort and destroy.’”

Satanic Temple to demand ‘religious exemption’ for ‘abortion ritual’ in court if Roe overturned
How Satanists are trying to use America’s religious freedom laws to overturn pro-life legislation
Is abortion ever necessary to ‘save the life of the mother’?
Congressman defends statement that abortion is never medically necessary
Rabbi urges Vatican synod to reject homosexual agenda