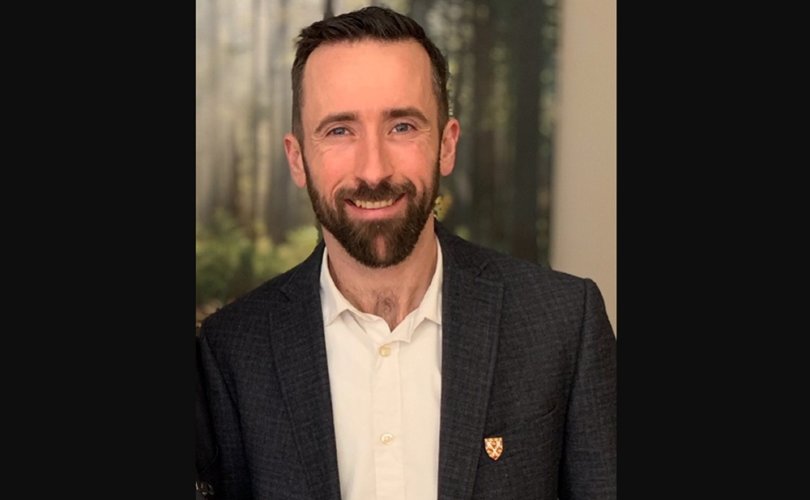 ONTARIO, January 19, 2021 (LifeSiteNews) — The leader of the Conservative Party of Canada (CPC) announced yesterday that he has “initiated the process” to remove pro-life M.P. and former CPC leadership candidate Derek Sloan from the caucus due to what he says was an acceptance of a $131 donation from a “well-known white supremacist.”

“Derek Sloan’s acceptance of a donation from a well-known white supremacist is far worse than a gross error of judgment or failure of due diligence,” said CPC leader and M.P. Erin O’Toole in a statement yesterday.

“In accordance with the Reform Act, I have initiated the process to remove Mr. Sloan from the Conservative Party of Canada caucus. I expect this to be done as quickly as possible. Moreover, as Leader of Canada’s Conservatives, I will not allow Mr. Sloan to run as a candidate for our party.”

“If I am guilty of something, they are guilty of something, and this is, this is ridiculous[.] … I’m not going to go down without a fight. So this is ridiculous — I have always been here from day one, standing for strong conservative principles, standing for grassroots engagement, and I’m not going down into the night quietly,” said Sloan in his Facebook video.

“So they’ve picked a fight with the wrong person, and I fully, fully intend to prosecute this, yeah, further in the court of public opinion, and who knows what other types of situations as well. This is — this has gone way too far. This is ridiculous.”

O’Toole’s statement came about after a recent Press Progress report that noted that an individual named Paul Fromm had donated a total of $131 to the Conservative Party of Canada in August 2020.

The report noted that the CPC “confirmed to them” that it was directed to Sloan’s leadership campaign.  In the Press Progress report, O’Toole said he was “outraged” at the news of Fromm’s donation and promised an investigation into the matter.

Fromm, whose donation came under the alias Frederick P. Fromm, as Sloan says he discovered, is described as a white supremacist tied to the “neo-Nazi” label.

It was later in the day after the Press Progress report was published when O’Toole sent out his statement saying he had started the process to remove Sloan.

On Twitter yesterday, Sloan mentioned that “on any given day,” his campaign had “upwards of hundreds of different donations,” which raised well over $1.3 million.

“My team, which was run in many cases by volunteers, processed cheques and other things. At no time was I ever aware of this donation,” said Sloan on Twitter.

“Upon learning about what happened, I immediately contacted the Executive Director of the Conservative Party, Janet Dorey, and requested this donation be returned,” said Sloan in another tweet.

Sloan said he learned about the Press Progress report at 4:00 P.M. EST Monday.

“Paul Fromm is a notorious name to some, but not to everyone, and clearly this name, mixed as it was in the midst of thousands of other donations, did not ring any bells to my team,” wrote Sloan on Twitter.

“#Prolife MP Derek Sloan was set up & wrongly attacked because a white nationalist made a donation to his #CPC Leadership campaign under an obscure pseudonym. Derek couldn't possibly have known. Nobody expected him to research the names on all 13K donations he received. @CPC_HQ,” wrote CLC on Twitter.

Anderew Lawton from True North News said on Twitter that if the Conservatives are going to allow “PressProgress, a left-wing opposition research mill, [to] dictate their actions,” then “Canada’s right is in trouble.”

Former CPC M.P. and now leader of the People’s Party of Canada Maxime Bernier said the CPC is an “insane cult of diversity.”

“Based on @erinotoole’s new standard, the @CPC_HQ is a racist party and they must all resign! That’s where you end up when you join the insane cult of diversity. Everyone is a racist,” wrote Bernier on Twitter.

“I left the @CPC_HQ 2 1/2 years ago after it became clear it was being taken over by the same cancel culture, radical multiculturalism, and cult of diversity that now define the Left. Many did not believe me. Prove me wrong now,” he said in a later tweet.

Elections Canada stipulates that the disclosure of a donor name is required only for contributions over $200, meaning that the only entities likely to have known about Fromm’s donation would be Sloan or the CPC.

The Reform Act was passed in 2015, and while technically it allows for M.P.s to have a freer vote in the House of Commons, it states that to expel an M.P. from the caucus, at least 20 percent of the party members must first agree to trigger a review. A majority M.P. vote is then required.

The CPC caucus will now be tasked with voting to keep Sloan in or out of the party. This vote is expected to take place this Wednesday morning at 11:00 A.M. EST.

The CPC elected pro-abortion O’Toole, who professes to be Catholic, as the new leader of the party early in August. Sloan came in fourth place behind Leslyn Lewis and Peter MacKay.

In August, shortly after losing HIS bid to become party leader, Sloan, who has repeatedly professed his pro-life stance, said that despite not winning the leadership of the CPC, he had run his campaign with “no regrets” and will “never back down” in speaking out for social conservative issues.

“This race proved that social conservatives have to be taken seriously. I ran the campaign with no regrets, and clearly articulated concerns I had with parental rights, Canadian sovereignty, climate alarmism, mandatory masks and vaccines, and many other issues,” rookie Ontario M.P. Sloan told LifeSiteNews at the time.

“I will never back down from speaking the truth and advocating for true conservative principles. Thank you to all my supporters for their sacrifice, support, and prayers.”

In a detailed statement sent out late last night — which came before his Facebook video — Sloan struck back at O’Toole, saying Fromm had used an alternate name when he donated, was a member of the CPC, and voted in the leadership race.

Sloan said he learned “for the first time” about Fromm’s $131 donation in the late afternoon Monday and that upon further investigation, he discovered that “it was clear the donation was made using the name Frederick P Fromm.”

“Using this obscure form of his identity, he donated $131 dollars, and 10% went to the party. His donation was processed without either my campaign or the CPC realizing who had made the donation, and the party accepted its 10% cut of the donation. I presume that the party kept its 10%,” said Sloan in his statement.

In his statement, Sloan went onto note that he discovered that Fromm, again under the guise of “Frederick P Fromm,” had applied to be a member of the CPC and that the party accepted his application.

Sloan noted that Fromm was sent a mail-in ballot to vote in the CPC leadership race, and none of the scrutineers tasked with checking membership objected. Fromm’s ballot was accepted.

“Therefore the Party, and the O'Toole campaign, failed to uphold the same standards … they are now applying to me,” noted Sloan in his statement.

Sloan added that when O’Toole earlier in the day made his comments in the Press Progress report, saying he would conduct a public undertaking to see what happened, “neither Erin O’Toole nor anyone on his team made any effort to contact me.”

“If the party later realized who it was, and returned its share of the donation, they never told me. They should have. If they did not discover this, I am not surprised — neither did we until this story broke earlier this afternoon.”

In an email sent out today to his followers, Sloan urged them to “stick with this process” and participate in the upcoming CPC virtual convention, scheduled for March 18–20, 2021.

“More importantly, I urge you to stick with this process. It should now be very evident just how important it is that we have a strong presence at the upcoming convention. If we do not, the types that wish to send me packing will do our party great damage,” wrote Sloan.

Campaign Life Coalition (CLC) has asked it supporters to “flood” their Conservative MPs and party HQ with a demand that they vote no in removing Sloan from the party, and to “respectfully request that Erin O’Toole walk back this disgraceful attack on Sloan.”

They are also asking their members not to “quit” the CPC or the upcoming policy convention.