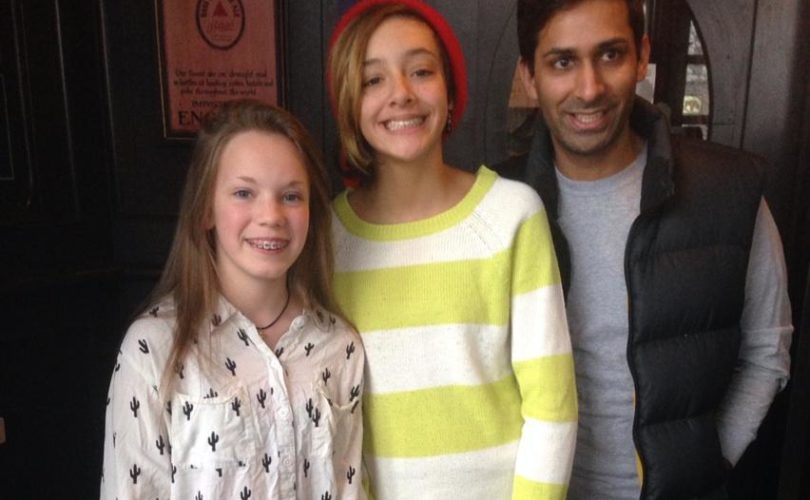 OTTAWA, April 1, 2015 (LifeSiteNews.com) — Two eleven-year-old girls will receive an award from a pro-homosexual organization for starting Canada’s first “gay-straight alliance” (GSA) club in their JK-8 Ottawa Catholic elementary school. This comes after the girls’ successfully brought the Ottawa Catholic School Board to its knees four months ago over their successful campaign to present a social justice project on “gay rights.”

Quinn Maloney-Tavares and Polly Hamilton, students at Ottawa’s St. George Catholic School, will receive the award April 8 at the Ottawa Pink Gala organized by the Canadian Centre for Gender and Sexual Diversity (CCGSD), formerly Jer’s Vision. The award is presented to “leaders from across Canada who have gone above and beyond in the fight against bullying and discrimination,” the Day of Pink states on its website. Past recipients include Rick Mercer, Jack Layton, and Stephen Lewis.

Homosexual activist Jeremy Dias, the founder of the organization awarding the girls, had lunch with the girls in an Ottawa-area restaurant two days after the school board reversed the Catholic school’s decision to bar the girls’ project, which had provoked national scrutiny.

Dias told LifeSiteNews the girls were nominated for the award for starting “Canada’s first Gay-Straight Alliance in a Catholic elementary school.”

“Any initiative to address discrimination or oppression by individuals is a remarkable act. These two young girls are trying to challenge what they see as disrespectful and derogatory language, actions and behaviors in their schools. I think it’s important to celebrate the initiative of youth to make the world a better place.”

Dias, who says he is gay and has a male partner, sees himself as a practicing Catholic who takes his faith seriously. He told LifeSiteNews that he goes to church every Sunday at St. Theresa's in Ottawa. He called Catholic teaching on homosexuality “complex and varied.”

When asked if he thinks the Catholic Church is ‘homophobic’ for calling homosexual acts “intrinsically disordered” and the same-sex inclination itself “objectively disordered,” Dias said he prefers to use the terms “heterosexist” or “unaware.”

“I think as we grow and as we learn, we change our attitudes. But I would never call anyone, especially not my church, homophobic.”

“When we talk about LGTBQ issues, if we’re really Catholic, which I claim to be, then we help those who are struggling, and we support those who need help the most,” he said.

“I think it’s really critical that we understand that this initiative, or these works, are not done by archbishops or priests. A lot of this education is done by educators, or principals, or vice-principals. It’s not only theological in nature, it’s human, which can be even more divine,” he said.

Critics say the GSA clubs are not about making so-called ‘safe’ places for same-sex attracted students, as they are billed, but aim to push the normalization of homosexuality on impressionable children.

In a video interview by the Ottawa Citizen, the girls appear to be completely clueless as to why a homosexual organization would choose to honor students in a Catholic school with an award.

Dias’ organization, founded in 2005, seeks to eliminate “homophobia” and “transphobia” in schools and youth communities. In 2011, the organization ran a field trip for high school students that included a drag show. The CCGSD partners with pro-abortion groups such as Planned Parenthood and pro-prostitution groups such as Maggie’s Sex Work, as well as numerous pro-homosexual groups. The organization also offers an LGBTQ K-8 curriculum to teach children “new ideas about families” that includes two women or two men “being able to have/make a family together.”

Some homosexual activists, such as Sason Bear Bergman and Daniel Villarreal, have confirmed social conservative claims that gay-themed materials and policies pushed in grade schools across North America are aimed at “indoctrinating” children into acceptance of homosexuality.

“I am here to tell you: All that time I said I wasn't indoctrinating anyone with my beliefs about gay and lesbian and bi and trans and queer people? That was a lie,” wrote long-time Canadian gay activist Bergman, a woman who identifies as a transgender man, in a recent piece.

U.S. gay activist Daniel Villarreal wrote in a 2011 piece that pushing “anti-bullying programs or social studies classes that teach kids about the historical contributions of famous queers” is to “deliberately educate children to accept queer sexuality as normal.”

“I would like to congratulate Quinn Maloney-Tavares and Polly Hamilton on the receipt of an award from the Canadian Centre for Gender and Diversity,” Sandals said in the email obtained by the Ottawa Citizen. “In Ontario, we believe in a safe and inclusive school environment where all students feel safe and accepted, and I’m proud to see these students putting this belief into practice,” she added.

The CCGSD will be hosting its first annual conference for Ontario educators next month on implementing the Accepting Schools Act, the legislation that forced GSAs into Catholic schools. Liz Sandals will be giving the keynote. The conference aims at providing educators, administrators, and staff with “practical tools to ensure a safer climate” in their schools.