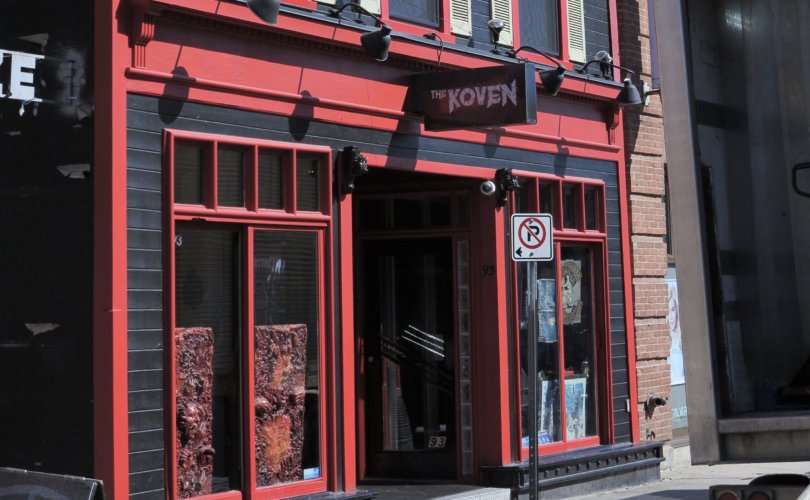 “Some people have counselled me to say nothing, that those perpetrating this sacrilegious deed are merely seeking publicity,” Prendergast said in an email statement to LifeSiteNews.

“But I need to be concerned for my own people, who would be shocked to think this matter was publicized and we did nothing about it,” he said.

“My concern is for the faith of our people and the offence that this brings to their love of and reverence for the Eucharist.”

Organized by Nicholas Marc, national director of the Satanic Temple in Canada, the blasphemous ritual will take place at 10 p.m. August 17 at a heavy metal bar called The Koven.

The venue is located just a few blocks from Notre Dame Basilica and Cathedral, as pointed out by the Catholic Register.

Marc told Global News that it would be “be the first organized public black mass in Canadian history.” He is selling 50 tickets at $20 each for the ritual through the Satanic Temple’s Facebook page.

The Satanic ritual is “an expression of personal liberty and freedom” and that the “freeing expression is found in the blasphemy,” he told Global News.

“Essentially, it involves using traditional symbols and inverting them to create a ritual that is meant to be the opposite of traditional (M)ass,” Marc said.

Archbishop Prendergast told the Catholic Register that the Archdiocese of Ottawa asked the organizers if they would be using a consecrated host for the black mass, and organizers said none would be used.

Marc told LifeSiteNews that the Satanic Temple is an “atheist organization so as such we don’t recognize the theological value of a consecration … We are Satanists who revere the symbolic and literary tradition of the Satanic mythology.”

The archbishop expressed relief that the black mass will reportedly not involve desecrating a consecrated host, the Catholic Register reported.

To do so would be “vile and sacrilegious, attacking the most sacred reality of our faith, the consecrated host: the Body, Blood, Soul and Divinity of Our Lord Jesus Christ,” Prendergast pointed out to LifeSiteNews.

“To tamper with and mock the Mass — which is what this satanic ritual does — is hateful and will affect more than those who participate in it,” Prendergast said.

“It will say loudly that the central belief of Christians should not be shown respect, as we would expect respect to be shown to the Jewish Torah, to the Muslim Koran and to the sacred objects of other faiths,” he said.

“Such a ritual sends the wrong message that we’re tolerant of what is in effect hate speech, which this has become by the widespread publicity being given to it,” added Prendergast.

Moreover, any dabbling in occult practices “has the potential of opening a spiritual doorway into the evil realm — giving demonic spirits permission, in other words — to infest our city with negative and evil energies,” he told the Catholic Register.

“People have expressed surprise that Pope Francis so often refers to the devil at work in our world as he and his minions attempt to thwart the good that Christians and the Church are committed to,” said Prendergast.

“But, as St. Paul says, our spiritual battle is not merely against flesh and blood — that is to say, other human beings who are opposed to the Gospel message, but ‘against principalities and powers, against the dark rulers of this world,’ that is rebellious angels who continue to attempt to undermine the spread of God’s Kingdom in human hearts.”

According to Global News, the Satanic Temple has grown rapidly in the last six years with more than 100,000 members worldwide and 18 official chapters in the United States, with headquarters in Salem, Massachusetts.

Marc says he has put a “ moratorium on new chapters” of the Satanic Temple in Canada “because we literally have too much growth right now,” it reported.

Prendergast said that since hearing about the black mass, he has been praying for “illumination from the Lord, how to act myself and to guide the religious, clergy and laypeople of the Archdiocese to confront this challenge. Of course, we have many spiritual means.”

He will be offering Mass at a parish church on the morning of August 17 “in reparation for the harm that will transpire on Saturday evening,” he said.

“I am asking intercessory prayer groups to pray for those planning to take part in this (black mass) event so that they turn away from the path of darkness and turn instead towards the light of faith,” he told the Catholic Register.

“I will be encouraging pastors to determine how they may bring this to the attention of the faithful of their parishes and offer a Mass, holy hours and other prayers in reparation” for “the spiritual harm that is being planned, and that God would turn this blasphemous project into an occasion of grace,” he said.

Moreover, Catholics must be diligent in protecting the Eucharist.

“Clergy and Extraordinary Ministers of Holy Communion need to be vigilant that the person coming to receive the Eucharist consumes it in the presence of the minister,” the archbishop emphasized.

“If someone presents himself for the reception of Communion and appears to be uncertain about the ritual, they should be asked about their faith and, if not Catholic Christians, be refused in a charitable manner,” he said.

Prendergast noted that a recent Pew Research survey found about 70 percent of American Catholics who do not regularly attend Sunday Mass believe the Eucharist is only a symbol.

Among Catholics who go to Mass every Sunday, 23 percent don’t know the Church’s teaching on transubstantiation, and 14 percent don’t believe it.

The survey “can serve as an occasion for pastors to remind the faithful of our Catholic belief, that the consecrated host only appears to be a wafer, for at the consecration of the Mass it has truly been changed into the Body and Blood of Christ, our Saviour,” Prendergast noted.

“Christ’s ‘Real Presence’ is central to our understanding of the Mass, which is the ‘summit and source’ of all the graces God gives his people in the Holy Sacrifice of the Mass. This is perhaps the most distinctive feature of Catholic faith,” he said.

Meanwhile, Prendergast, along with Bishop Pierre-Olivier Tremblay of Trois-Rivières, Quebec, will be attending Canada’s first Rosary Bowl on August 22, the feast of the Queenship of Mary.

The Rosary Bowl will be held in Ottawa’s Lansdowne Park, on the same site of the historic Marian congress in 1947, when the bishops consecrated Canada to the Immaculate Heart of Mary.