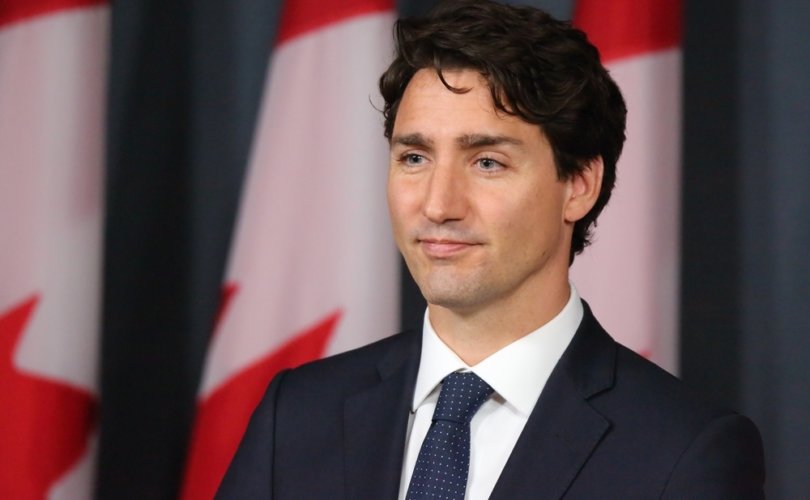 OTTAWA, May 16, 2014 (LifeSiteNews.com) – Ottawa Archbishop Terrence Prendergast has issued a statement in response to Catholic Liberal leader Justin Trudeau’s new policy that only ‘pro-choice’ candidates will be endorsed to run as candidates in his party.

Entitled, “Being in Communion with the Catholic Church on Moral Issues,” the letter says, “One may not dissent from these core teachings on life issues and be considered a Catholic in good standing.”

All priests of the archdiocese have been informed that the archbishop expects the letter will be made available to parishioners in the bulletin this Sunday.

“The position of the Catholic Church in favour of life at all stages is clear and unchanging,” writes the archbishop. “A person who takes a position in contradiction to the teaching of the Catholic Church on the value and dignity of human life from the moment of conception to the moment of a natural death, and persists in this belief, is not in communion with the Church’s values and teaching, which we believe faithfully transmit for today the teachings of Christ.”

Signed by Archbishop Prendergast on May 14, the letter concludes, “This is a very serious matter requiring of each Catholic, prayer, reflection to inform one’s conscience, and openness to embrace the Gospel of Jesus Christ in its fullness.”

A letter to priests, directing them to make the pastoral letter available to parishioners explains, “It is important that the faithful in Ottawa receive guidance on this topic and he appreciates your cooperation.”  It adds, “The archbishop hopes that this statement will help you in clarifying the issue with parishioners who are looking for guidance.”

Meanwhile Justin Trudeau has been touting his Catholicism in the mainstream media.  In an interview with the Ottawa Citizen yesterday, Trudeau claimed, “I had an extraordinary example in a father who had deeply, deeply held personal views that were informed by the fact that he went to church every Sunday, read the Bible regularly to us, and raised us very, very religious, very Catholic.”  Still speaking of his father, Trudeau added, “But at the same time he had no problem legalizing divorce, decriminalizing homosexuality and moving in ways that recognized the basic rights of the people.”

Justin failed to mention, however, that his father Pierre Elliot Trudeau also was a driving force behind the legalization of abortion in 1969.

Trudeau has been a featured speaker at Catholic schools across Canada for many years, and famously gave a talk in 2002 at a preparatory event for World Youth Day in Toronto in which he exhorted the young people to reject “old men with old ideas.”

Trudeau held a campaign event during his leadership bid in 2012 at a Sudbury Catholic high school. When Catholics protested, the local bishop, Bishop Jean-Louis Plouffe of Sault Ste. Marie, defended the event by saying Trudeau is “not estranged from the Church in any way.”

“Mr. Trudeau is a practicing Catholic, married in the Church with two children. He is not estranged from the Church in any way,” the bishop stated. “In many ways he can be a source of inspiration to the youth.”

Jim Hughes, national president of Campaign Life Coalition, told LifeSiteNews that Archbishop Prendergast’s letter is “a very positive and much needed statement and I applaud him for doing it.”

“I hope when people read they will act on it and not choose political pragmatism over truth and justice,” Hughes added.