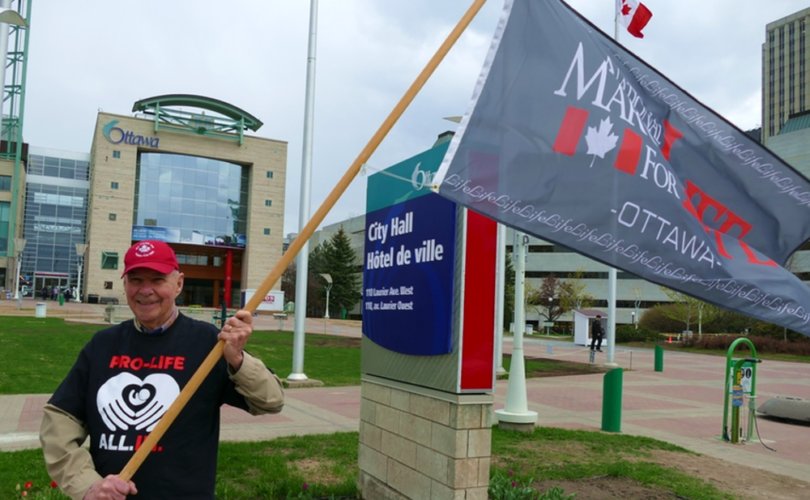 Pro-life activist Francis Barrett waves the March for Life flag himself on May 10, 2018 after Ottawa city hall refused to raise it.Patrick Craine / LifeSiteNews

OTTAWA, March 10, 2018 (LifeSiteNews) – Pro-lifers gathering for the Canadian March for Life today are objecting to the Ottawa City Hall’s refusal to allow a pro-life flag to be flown marking the occasion.

“They have their views, they’re entitled to it, but I don’t know why in heaven’s name they can’t respect other people’s views,” pro-life activist Francis Barrett told LifeSiteNews. He brought the pro-life flag to city hall this year anyway and waved it himself, along with a dozen other pro-lifers, along the property's edge.

“It’s not like we’re doing anything wrong,” he said. “We’re just drawing attention that there’s an awful lot of babies being killed.”

Barrett erected a flag at city hall for last year’s march, with the city’s permission. However, Ottawa’s pro-abortion Mayor Jim Watson had it taken down after backlash from pro-abortion activists and city councillors.

Watson also ordered a review of the city’s process for approving flags and proclamations, after having issued a “National March for Life Day” proclamation. That review resulted in new guidelines disqualifying any flag from an organization whose “undertakings or philosophy” are “politically or religiously motivated or represent other individual conviction.”

“Today, because they wouldn’t put our flag up, and the mayor would not give us a proclamation, which I think as Ottawa taxpayers we’re entitled to, he refused to do it, it appears that he’s taking for abortion,” Barrett continued. “He’s taking sides, and as a mayor he should not take sides, he should keep it neutral.”

He noted that even after the rule change, Ottawa continues to allow pro-LGBT flags to fly at city hall.

“It’s unfair, and it’s unconstitutional,” Barrett lamented, though he wasn’t surprised. “We know what we have up there on the hill. I won’t go any further on that one.”

“I had a permit and went through all the rigmarole” to be able to fly the flag myself, Barrett told the Ottawa Citizen. “I thought ‘How do I counter that.’ So here I am.”