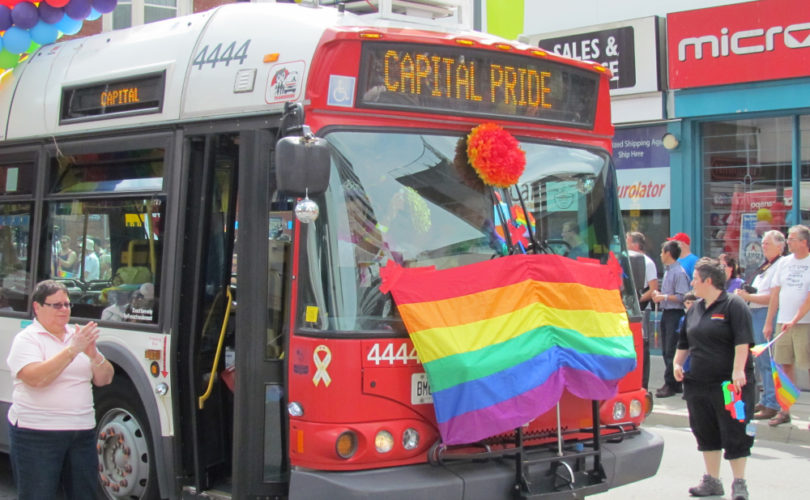 “It’s a great day for Ottawa [if] sex will not be paraded on the main street and children will not be visually violated,” he told LifeSiteNews.

The Capital Pride Board of Directors stated on Facebook Monday that its current financial situation is “beyond its ability to alter or repair and is now forced to declare bankruptcy.”

Despite this, the city’s homosexuals have already declared that next year’s parade will go on, even if it means looking for outside help — including the possibility of moving an international homosexual festival to Ottawa — to make it happen.

“There will be something. It won’t be Capital Pride putting it on. They’ve lost all credibility. Nobody will ever work with them again,” Sebastien Provost, whose production company House of SAS helped organize this year’s event, told the Ottawa Citizen.

Capital Pride, formally known as Pride Ottawa-Gatineau, has more than a decade-long history of failing to pay its bills in its 29 years of existence. In 2006 it owed an estimated $187,000 for past events, including over $66,000 to the City of Ottawa and about $100,000 to local businesses. Confusion caused by missing invoices and bad record-keeping seems to constantly plague the organization.

LifeSiteNews reported in 2006 about how the Capital Pride committee was unable at that time to find sponsors for the event and wanted the city to step in and use tax dollars to cover costs.

A company that provided this year’s homosexual event with tents, tables, chairs, and toilets has not been able to collect $42,000 owed by Capital Pride, reported Ottawa Citizen. Other partners have also failed to receive promised payment, including a liquor provider owed $24,000, a printing company owed about $8,500, and a DJ and a show producer both owed an unspecified but significant amount.

LifeSiteNews asked Capital Pride Chair Jodie McNamara by email if declaring bankruptcy means no more homosexual parades in Ottawa, but did not receive a response by press time.

LifeSiteNews reporter Patrick Craine attended the 2013 Ottawa Pride Parade, and described it as a “large-scale, state-backed celebration of kinky sex.”

“There were loads of people in nothing but underwear, dozens in leather bondage gear, and I saw at least a dozen topless women. I took everything I was handed, and walked away with a dozen condoms,” he wrote at the time, adding: “The drive to glorify illicit sex is what animates the entire event.”

McVety suspects declaring bankruptcy is a ploy to have taxpayers fund future events. “My suspicion with Capital Pride is that this is a maneuver to try to get government funding so they can have their sex parade,” he said.

“Our government should not be funding anything that contains illegal activity. Public nudity is illegal activity and is damaging especially to children. It is my hope and prayer that the government doesn’t get fooled and does not supply hard earned tax dollars for a sex parade,” he said.

Gwendolyn Landolt, national vice-president of REAL Women of Canada, told LifeSiteNews that many people attend the homosexual parade primarily for the “circus-like spectacle that the participants in the parades provide,” not because they actually support homosexual practices. She hopes, along with McVety, that Ottawa City Council will not bow to “politically correct” pressures to fund the event, arguing that most taxpayers would like to see their money go elsewhere.