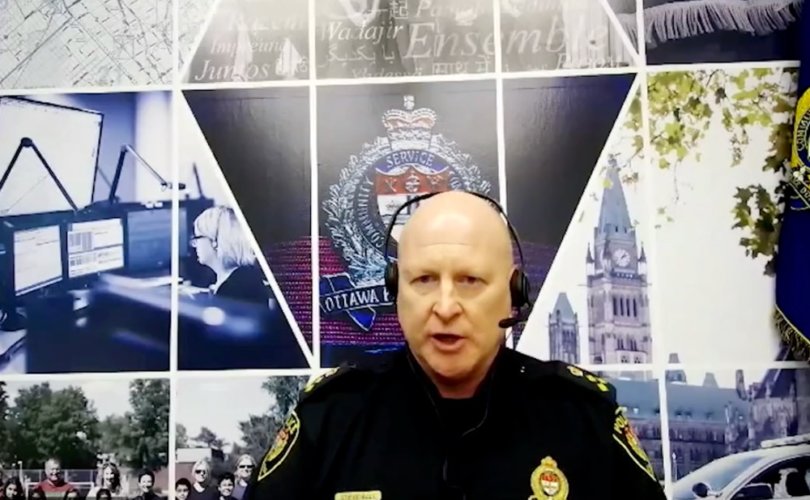 OTTAWA, Ontario (LifeSiteNews) – A Canadian police chief has acknowledged that no loaded firearms were seized in Ottawa during last month’s police takedown of the trucker Freedom Convoy.

Ottawa Police interim chief Steve Bell made the admission this Thursday while appearing before a House of Commons parliamentary public safety committee meeting regarding the Freedom Convoy. For three weeks in February, the Freedom Convoy protested in the capital for an end to all COVID mandates.

During the meeting, Conservative Party of Canada (CPC) MP Dane Lloyd continually pressed Bell for answers regarding the allegations of loaded firearms in Ottawa, which had been made by some in the media.

“Were any loaded shotguns found [in Ottawa] in the trucks of protestors?” Lloyd asked Bell.

Bell responded by saying, “We did receive information and intelligence around weapons and possession of weapons by people that either had attended or intended on attending the occupation.”

“As a result of clearing, at no point did we make any firearm-related charges, yet there are investigations that continue in relations to weapons possession at the occupation,” he added.

Not satisfied with Bell’s answer, Lloyd continued to press him, and asked for a yes or no answer.

Bell responded, “There [have] been no charges laid to date in relation to weapons at the occupation site.”

“It’s just a clear question, Interim Chief,” Lloyd continued. “Like, were weapons found? Were loaded firearms found? Yes, or no?”

“No, not relating to any charges to this point,” said Bell.

Bell was put in charge of shutting down the Freedom Convoy after its chief Peter Sloly quit amid a public uproar over his handling of protests.

Bell stated in a press conference during the Freedom Convoy protests that there were “several criminal investigations ongoing that relate to the seizure of weapons,” but said there were no charges relating to them.

In mid-February during the height of the Freedom Convoy protests, Corporal Daniel Bulford, a former Royal Canadian Mounted Police (RCMP) sniper who was head of security for the Freedom Convoy in Ottawa warned there was credible evidence that guns could be planted near the protestors to “discredit” the group.

Days after Bulford’s warning, a cache of some 2,000 firearms stolen from a Peterborough, Ontario, truck yard were recovered, although some 13 small calibre guns remain missing.

Ottawa police recently disclosed that an arson that occurred near Canada’s parliament in Ottawa last month had nothing to do with the Freedom Convoy despite the protesters being blamed earlier by some politicians.

Canadian Prime Minister Justin Trudeau claimed the Freedom Convoy protesters were funded by foreign entities with ties to terrorist-linked financing. This reasoning was used as justification for Trudeau to enact the Emergencies Act (EA) against them on February 14 and subsequently clear them out. The EA was revoked on February 23.

Trudeau’s use of the EA gave the federal government unparalleled powers, such as the ability to freeze bank accounts, even without a court order. Many accounts were frozen; however, they were done so under the orders of police who then contacted banks.

Just recently, a top official with Canada’s Royal Canadian Mounted Police (RCMP) recently said there is no evidence of any links to terrorist activity in the funding of the Freedom Convoy.

The Justice Centre for Constitutional Freedoms (JCCF) is currently suing the federal government under Prime Minister Justin Trudeau for its abuse of the EA.